Scarratt Under no Illusion of Ireland Threat 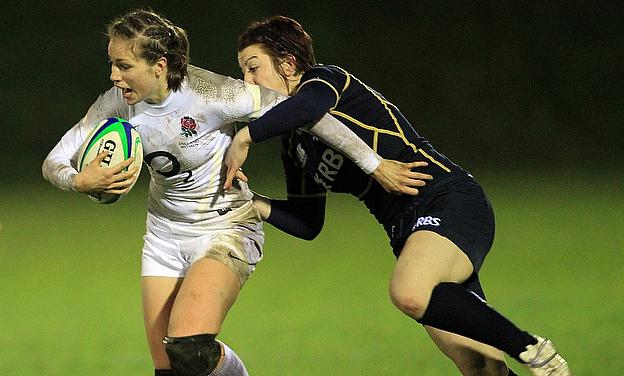 Emily Scarratt believes women's rugby is as competitive as ever
©PA

Women's Rugby World Cup 2014 - Into The Final Week
WRWC 2014: England and Ireland through to the Semis
WRWC 2014: The Round 2 Matches
WRWC 2014: Opening Games in France
World Cup glory is on the Horizon according to Alphonsi

Out of the frying pan and into the fire – England women’s rugby team, although avoiding a clash with New Zealand, believes their historic elimination from the World Cup signifies the growing strength of women’s rugby.

The four-time Champions, the Black Ferns – who beat England in the 2010 final – were victims of the greatest upset in the tournament’s history when they succumbed 17-14 to Ireland – England’s semi-final opponents in Paris on Wednesday afternoon.

Bookmakers reacted to the end of New Zealand's title defence by shortening England to second favourites, but star centre Scarratt believes the result has repercussions that extend beyond Red Rose ambition.

"With New Zealand gone we see this as a great chance to win the World Cup, but we're not naive enough to think that other nations won't feel exactly the same way," Scarratt said.

"This World Cup was never just about New Zealand and that's been born out by the teams who have reached the semis - us, Ireland, France and Canada.

"Ireland beating New Zealand shows where women's rugby is at now. It's no longer a two or three-horse race.

"It's about so many nations who have worked hard and closed the gap that was traditionally there."

Hosts France, who beat England in the first game of this year’s Six Nations, are the top seeds, but it is the increasingly fierce rivalry between the red rose and Ireland that will set pulses racing in the first of the two semi-finals at the Stade Jean Bouin.

It was the Irish who ended England's seven-year dominance of the Six Nations when they won the Grand Slam in 2013 and while the Red Rose avenged their defeat earlier this year, the sides are well matched.

"They'll be so up for this game after beating the world champions and we know their confidence will be sky high.

"We know what Ireland bring because we play them so often - it will be a war of attrition as we try to find those small margins that make a difference in the game.

"Ireland v England is never without passion and fire. They've got pace in the backs and that brutality in the pack that every team needs."

England have made six changes following the disappointing 13-13 draw with Canada, among them the return of Captain Katy McLean at fly-half.

McLean was controversially left out against the Canadians, but has been given the nod along with scrum-half La Toya Mason, wing Kay Wilson, prop Sophie Hemming, hooker Victoria Fleetwood and lock Joanna McGilchrist.