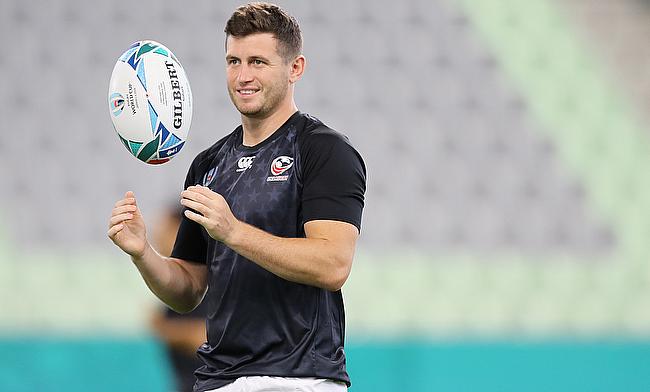 GK IPA Championship: Smith certainly not feeling blue at Bedford
USA can be competitive ‘with anyone in the world'
Yorkshire Carnegie - What has gone wrong?
Championship Rugby - Some possible solutions

Returning to his native London after two years of plying his trade in Major League Rugby, Will Magie’s journey to being a professional rugby player is certainly a unique one.

Having captained the University of Leeds, as well as playing for Ealing and Otley along the way, the fly-half now finds himself in the Championship with London Scottish.

Coming to the West London club after representing the USA at the Rugby World Cup, Magie was one of many players made professional due to the arrival of Major League Rugby and the 27-year-old is proud of his unique route to the professional stage.

“It definitely keeps me grounded and I’m quite fortunate that I am now able to play professionally, because when I was at Ealing the year after uni, I was on a play to pay contract,” Magie said. “I think I played three games and maybe took home about £500 for the year from rugby.

“Obviously I had another income on top of that. You are getting up at six in the morning to go to the gym, going to work and getting to training for six in the evening. It definitely keeps me humble and I am very grateful that I am now able to have it as my sole focus.

A big thank you to my family and friends for all their years of support, my coaches since the age of four and all my teammates over the years. I wouldn’t have this opportunity if it wasn’t for you all. Can’t wait to get going!! #RWC19 ???? pic.twitter.com/MN9XlhWdg7

“Everyone has a different path and you see that with a couple of the guys I was at Uni with. Tomos Francis with almost 50 caps for Wales, is one of my closest friends, he slipped through the net growing up. Another guy I played with at Uni was Alex Lozowski, he’s just had his 100th appearance for Saracens and he didn’t have a look-in at academy level.”

Moving to Denver to play in the now defunct PRO Rugby competition that ran for one season in 2016, Magie’s efforts for eventual champions Denver Stampede were recognised by the Eagles and his first international caps soon followed.

Playing under England defence coach, John Mitchell for the Eagles, Magie qualifies for the country thanks to being born to American parents. It was Magie’s father, who knew little about rugby himself, that introduced him to the sport and even coached the fly-half for 10 years.

Returning to London after PRO Rugby went down, Magie played for Ealing as injury cover before spending time with the Western Force the season that the franchise was annexed from the Super Rugby competition. In 2018, a second opportunity to play professional rugby in America became apparent with Major League Rugby’s inaugural season.

“It’s a very good league and a lot of the boys here at Scottish have been asking me about it,” Magie said. “It is slightly, from my experience, slightly less professional. At London Scottish everyone is fully professional, whereas some of the players in MLR are still semi-pro and part-time.

“For example, with London Scottish we’re in from seven or eight in the morning until two or three in the afternoon, but in Glendale we would be in from about eight to eleven in the morning and then we would come back in the evening.

“It is just a few years behind the professionalism over here, but on the whole, I would say that some of the top MLR teams would compete easily in the Championship. It is a great league. I literally just saw that Juan Martin Leguizamon has just signed with Seattle. The calibre of player going out there is only good for American rugby.”

A West Londoner born and raised, Magie’s return to the English capital is an understandable one. It is a decision that would have been aided by changes to the international calendar as the Americas Rugby Championship will now be played in summer, meaning that USA and Canadian players can be released from club sides abroad to represent their country.

“The calendar works out a lot better now and it obviously makes us guys that are probably trying to play internationally slightly more attractive to teams in the UK because it doesn’t mean we’re going to be away for six to eight weeks,” Magie said.

“I’m looking at it like; I may never have to do a pre-season again if I play my cards right, which would be quite ideal. I’m still very focused on trying to play for the US and had a good chat with Gary (Gold) at the end of the World Cup and hope to continue being a part of his plans going forward.”

With London Scottish currently placed eighth in the Championship table, Magie has played consistently for the club since his arrival from Japan. Playing Cornish Pirates in the Championship Cup this weekend, Magie and his teammates have already beaten the side once this season in the league and they have only suffered one defeat in the Cup competition, which came last weekend against Nottingham.

We look forward to travelling down to Penzance to take on @CornishPirates1 this Saturday! ??‍??v??

After an indifferent start to the season, Magie hopes that he and his new teammates can have a strong second half of the campaign, with the clubs new number 10 loving his time back in London so far.

“We are striving for better and to really break into that top six, which is sort of the goal that we have set ourselves for the season and we know that we can perform to that ability,” Magie added. “We beat Pirates at home a few weeks ago in the league, which was a massive result for us.

“The big thing for us has been our consistency because we’ve put in good performances like that Cornish one. We have had lapses in performance, so we know what we have to build on. We know that on our day, all guns blazing, we can challenge any team in the league. That is very exciting to be a part of.”