Charlie Beckett Column: Whack your TV on and tune into the Red Roses 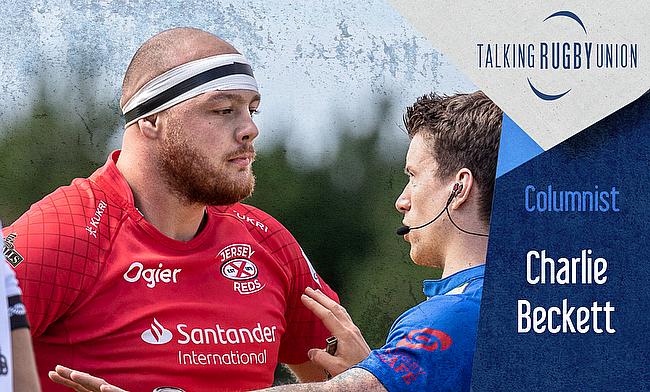 The World Cup has been and gone. A brilliant tournament that entertained us all for the last seven weeks or so.

But the question is, as rugby fans, what do we do now?

There is a void in our lives and it needs filling. Now some of you will be happy to fill said void with domestic and European rugby. Others will be content with off field drama filling that World Cup hole, and with what’s going on at Saracens at the moment there is plenty of that! But for some of you, I know there is nothing quite like international Test match rugby.

I have already seen the ‘countdown to the Six Nations’ posts on Facebook and I am here to bring you good news... You don’t have to wait until February to get your fix of international rugby!  That’s because ladies and gentlemen, this Saturday, the Red Roses play their first of three autumn internationals, and you can watch them live on Sky.

For those of you who don’t know, and it’s fine if you don’t, the Red Roses are the England women’s side. They have a squad of 28 players who are all full-time professionals. All 28 play in the Tyrrell Premier 15s, the Women’s Premiership here in England, playing for different clubs such as the women’s sides of Gallagher Premiership teams including Harlequins, Saracens and Bristol Bears, as well as more grassroots teams such as Firwood Waterloo, Darlington Mowden Park and Loughborough Lighting.

It all kicks off this Saturday in Clermont...

But while they all play for different club sides, they are all employed on central contracts by the RFU.

Now, those of you who do know, I can already hear you from the far side of your screen saying ‘Charlie, of course you’ll be watching the Red Roses, you’re biased and have a vested interest in the team’ and yes that is true, because my sister, Sarah Beckett, is one of the 28 professional players, so of course I will be watching the games and supporting her and the side.

However, I promise you, even if Sarah wasn’t playing in these games, I would be watching them.

I’d be watching them, because, to put it simply, they’re brilliant games of rugby. When I speak to people about women’s rugby, a lot say they don’t watch it because they don’t think it’s as entertaining as the men’s game, and I have to say, I passionately believe that is not true.

Now I will concede that while the women’s game is incredibly physical, and believe me, these players hit hard, the collisions are not as big as those in the men’s, but they never will be, simply because, as a whole, women are not as big or strong as men. That is just science and is never going to change. However, anyone who is willing to look me in the eye and tell me that international female rugby players are not as skilful as their male counterparts is either severely misinformed or, I’m afraid, a liar.

If you consider yourself to be a rugby fan and you aren’t entertained when you watch Jess Breach tear down the wing, Emily Scarratt kick the ball directly from her own 22 to the opposition’s 22 or Sarah Bern carry off 10 leaving three, four or five would be tacklers in her wake, then I’m here to tell you, you aren’t a true rugby fan, because they are all sights to behold.

It’s not just the Red Roses either. Further afield in the international game, go and watch Pauline Bourdon clear the ball from the breakdown for France, or Alev Ketler sidestepping her way through defenders for the USA. I could list loads of other international players that I love watching, the list is endless, but go and find them for yourselves because I promise you you’ll be pleasantly surprised at what all these ladies can do!

Your #RedRoses squad to face France in Clermont this Saturday ??

I think, part of the reason why some fans are hesitant to watch women’s rugby is because their only experience of it is watching their local club side at a grassroots level and because that game is not of the highest standard, or isn’t entertaining, they decide that all women’s rugby is the same.

A few seasons ago I was lucky enough to coach Cheltenham Tigers women’s side, a grassroots club playing in the Championship South, the second division of women’s rugby in England. In this division, it is safe to say the standard is not the highest in the world, certainly not as high as the men’s Championship or anywhere near the standard of the Tyrrell Premier 15s in which the Red Roses play, but I believe that there is a simple and understandable reason for this.

Take me for example. I have played rugby since I was four years old, that’s 20 years, meaning my rugby age is 20. If you take the Cheltenham side I was coaching, playing in the respective level league in women’s rugby, the majority of those women had only started playing the game at university, meaning their rugby age, for some of them, was as low as two or three years and other women in the team were absolutely brand new to the sport. When coaching them, I found that the most important thing was to help them understand the game because they hadn’t been around it as long, but I think this gets neglected by some coaches at grassroots level because they just presume these women have grown up with rugby like they have.

So if you are ever at your local club and see the women’s side playing, please don’t roll your eyes and walk away because the standard isn’t what you are used to, some of the women you’re watching may have only been playing the game for a couple of months and will still very much be in a learning phase.

Instead, I urge you to get behind them and show them your support, it will mean more to them than you can imagine. In rugby we pride ourselves on being an inclusive sport for everyone, and the more people playing the game the more it grows, and that can only be a positive for the sport as a whole. Also, I wouldn’t be surprised if you enjoy yourself while watching, and you never know, you may just be watching the start of a career of the next Red Rose.

Talking of the Red Roses, that brings me full circle and back to where I began. England play France away this Saturday (9/11/19) at the Stade Marcel Michelin in Clermont, a hugely intimidating place to go and play for any side.

They then play France in the return fixture the following Saturday (16/11/19) at Sandy Park, home of Exeter Chiefs, and finish their autumn internationals at Goldington Road, home ground for the Bedford Blues, with a fixture against Italy on the Saturday after (23/11/19). Unfortunately, my own playing schedule means I will only be able to attend the game against Italy but I absolutely cannot wait to be there and enjoy the game, hopefully cheering England on to a win.

So, in short, if you’re on the fence about watching women’s rugby, whack your TV on these next few Saturdays, or even better, get down to one of the two home games and give the Red Roses your support. I promise you, you won’t be disappointed!