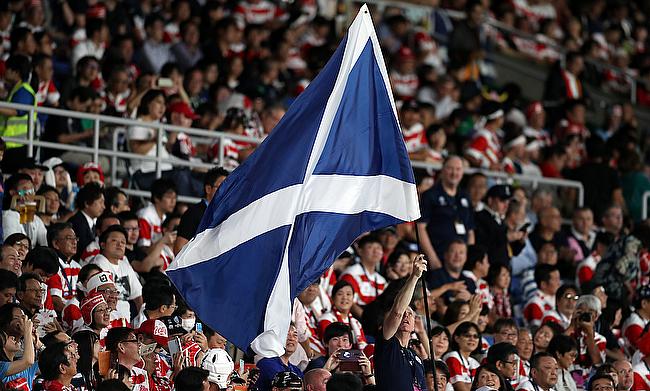 Scotland’s international men’s team can often come up with some of their best performances when their backs are against the wall, according to former centre Graeme Morrison.

Last week, the morale in the Scotland camp was hit hard by the withdrawal of star man Finn Russell from the group for ‘a breach of team protocol’ and then the subsequent injury to winger Darcy Graham.

Both players were sure to start the Six Nations opener away to Ireland on Saturday in Dublin had they been available so the coaches and players who are in Spain for a warm weather training week will no doubt have a lot on their minds.

However, they must focus on the job in hand and that is getting a first win away to the Irish since 2010.

STATEMENT | Scotland team spokesperson: “Stand-off Finn Russell will play no further part in preparations for Scotland’s Six Nations opener against Ireland, having been disciplined for a breach of team protocol during the week’s camp in Edinburgh. He has returned to his club."

And Morrison, who won 35 caps for his country between 2004 and 2012, believes the current crop can take strength from the way the 2010 squad triumphed in Ireland a decade ago.

“We lost to France, we lost to Wales and we lost to Italy and our Six Nations campaign was not going well at all,” Morrison, who was playing centre that year, recounted to TRU.

“In our fourth game, we managed a draw against England at home, but we still went into the last game knowing that it had not been a great few weeks.

“Ireland were going for the Triple Crown when we headed to Dublin, all the supporters thought it would be an easy day for them and reading the papers on the morning of the game you could tell that most people in Ireland thought that way.

“We just came together as a group of players on the day and we wanted to end the campaign on a high for ourselves and for the fans.

“In the end we won the game 23-20 and we played some great stuff in patches. Memories of that day came flooding back recently when Johnnie Beattie retired because he scored one of the great tries – I am still not sure how he got past all those defenders! - and Dan Parks was on fire with the boot.

“It was up there with one of the best days of my playing career because frustration was replaced by joy and we just played as a squad and gave it everything.

“I think the current squad can use the fact that people on the outside think that things aren’t going quite to plan to their advantage.

“Yes, our away form in recent years hasn’t been great, but this is the start of a new competition and a new year and what better way for the guys to gain some momentum than to work for each other and get a result over in Ireland.”

Which centres will hit the spot?

For two or three years now, we have heard a lot about the plethora of centres that Scotland have at their disposal.

The experienced Matt Scott and relative newcomer Rory Hutchinson have been brought back into the mix post-World Cup along with Huw Jones whilst Sam Johnson and Chris Harris are still there and the versatile uncapped Kyle Steyn could even come into the conversation.

Morrison said: “There are undoubtably talented centres in the squad, but they haven’t managed to quite find the right mix or blend of late.

“I think it is good to see Matt Scott back in the discussion. He has been around for a number of years and has had a great season with Edinburgh to date, so maybe he is what may be needed at 12 especially with no Finn Russell at 10. However, we know that Gregor likes Johnson in that 12 role so it might be hard to wrestle that shirt off him while Hutchinson has been flying for Northampton and that may get him the nod at 13, we will see.”

Glasgow Warriors’ Jones has 10 tries from 23 international caps, but he fell out of favour big time in 2019. However, he is now just looking to grasp his latest chance with the squad with both hands.

“I was obviously really disappointed about getting cut from the World Cup squad, but since then I’ve put it behind me and moved on,” the 26-year-old said.

“To be honest, I’m really chuffed to have the opportunity to be back in the Scotland camp. There was a point about a month ago when I thought I wouldn’t be involved and I was accepting of that, but I’m glad to be back.

“Looking at the weekend, I think I just want to enjoy being out there.

“Being left out of the World Cup was partly because they wanted to pick a defensively strong squad and maybe they didn’t see me as that. Maybe a couple of seasons ago I was all about attack and maybe that’s why I didn’t get selected for the World Cup.

“Off the back of that I’ve become a more rounded player and hopefully that will see me in good stead and I’d like to stay in the jersey for as long as I can.”

Scotland’s 23 man squad for the match will be named on Thursday lunchtime.

Ireland v Scotland is on Saturday at 4.45pm in the Aviva Stadium in Dublin and will be live on ITV & STV.