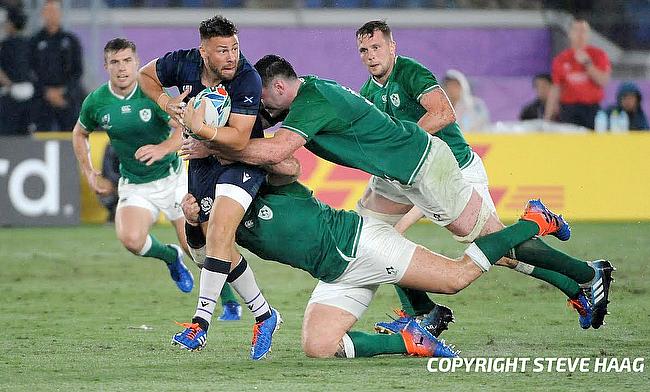 'Potentially exceptional' back-row leads list of new faces in Scotland squad
Stuart Hogg to lead Scotland in Six Nations 2020
Boyle-ing point: Connor on top form ahead of a big couple of months
Greig Laidlaw retires, but there should be no emergency at scrum-half for Scotland

There is a lot of talk in Ireland about who might start the Six Nations opener on February 1 with Ulster’s John Cooney putting his hand up for selection with an amazing run of club form.

And as opponents Scotland get ready to head to Dublin for that match at the Aviva Stadium there is also a lot of chatter about who will claim the starting number nine jersey for Gregor Townsend’s men.

With the experienced Greig Laidlaw have exited the international stage recently after bowing out at the World Cup, there is a real chance for one of Ali Price - 26 with 28 caps - or George Horne - 24 with 10 caps - to grab the shirt and keep it for the tournament if all goes well.

Scotland also have the dependable Edinburgh Rugby man Henry Pyrgos - a man who has captained his country - in their extended squad for the showpiece event, but most feel that Glasgow Warriors duo Price and Horne are the way forward.

They both play with enthusiasm, exuberance and pace, but at the very top level you also need to be able to control the tempo of a game when different circumstances arise.

This comes with experience and jobs like cajoling your forwards, telling them to pick and drive and perfecting the art of box kicking are just as important as a 50-metre burst in attack

That is what Laidlaw, who earned 76 caps between 2010 and last year, was so good at while the new number nine will also have to help fresh skipper Stuart Hogg in a leadership role, being, as they will be, nearer the referee and scrum-time than the full-back.

“Head coach Gregor Townsend now has to work with Ali and George and meld together the X-factor and the running game that they have - as well as the pace that they like to put on the ball - with some new found control that you need from a scrum-half playing at international level,” Rory Lawson, who earned 31 caps as a scrum-half for Scotland, told TRU.

"There is leadership void and a control void in there, Gregor has lost the safety net of having Greig at nine and these two guys have to put in the hard yards and grab this opportunity.

“So, there is a job there to be done by Gregor and by the two players and it is a big shift for Scotland who have been so used to having Greig in the matchday 23.

“If this situation is managed well the, I think it could be a really positive move in terms of the way that Gregor wants to play the game, but these guys [Price and Horne] are going to have to step-up.

“We all know what they can do in attack, now we want to see a more all-rounded game from them - they certainly have big careers ahead of them and this Six Nations is a chance to put a marker down.”

“We will continue to build papa’s legacy”

Meanwhile, Lawson, the 38-year-old who now works in broadcasting, and his mother Linda have spoken of the pride they feel about the legacy that the great Scottish rugby commentator Bill McLaren has left behind as they prepare to mark 10 years since he passed away this weekend.

When ‘The Voice of Rugby’ – Lawson’s grandfather - died aged 86 on January 19, 2010 there was an outpouring of grief in his hometown of Hawick and throughout the world of sport.

At the time, many felt that we would only have his wonderful match commentaries to remember him by, but thanks to his universal appeal and the hard work of a number of people, a foundation was soon set-up that would carry his name.

A decade on and the Bill McLaren Foundation is going from strength-to-strength, having helped raise over £1million pounds to date and with a number of charity events already organised for 2020.

Lawson often hosts the Foundation’s events and said: “I just love meeting people from all over the world and from all different walks of life at the events who have a story about my papa.

Absolutely LOVED being able to watch Bill McLaren, The Voice of Rugby Play in Papa’s home town of Hawick yesterday. Tears shed and laughs aplenty - an incredible story of love, war, dance, music, education, sport and family. The highs and lows of Papa’s life. What a story. An inspiration.

“It is lovely to hear people reminiscing and I think that the work that the Foundation team do is brilliant, they really do put in the hard yards to raise vital funds and continue to build papa’s legacy.

“Dad would be so proud of what the Foundation has been able to achieve,” McLaren’s daughter Linda Lawson added.

“Plans for the Foundation were in place before he passed away and it was great that we managed to get his blessing to fund raise in his name.

“We aim to raise funds for the development of rugby and other sports as well as championing the values of rugby that Dad held so dear and I think he would be amazed to see the amount of events that we have held over the years to do just that.

“He was such a humble man that I think he would also have been amazed to see the star names who have travelled from all over the world to be at some of those events, the likes of David Campese, John Smit and many, many more

.“We are a small team, but we are all passionate about the Foundation and are excited about what the future may hold."