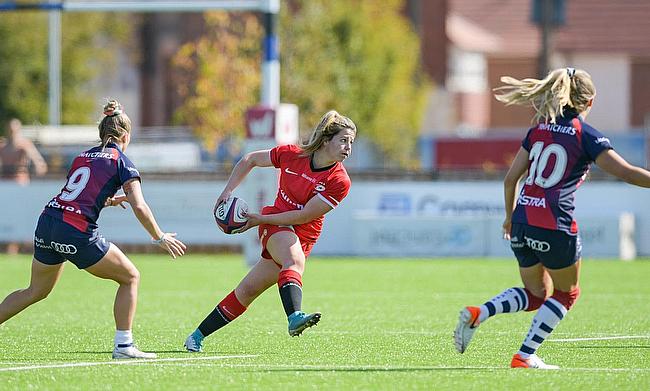 New Saracens Women’s stand-off Lis Martin has learnt a lot in her first three outings for the reigning champions in the Tyrrells Premier 15s - and off the pitch she has been helping local youngsters to learn too.

The 29-year-old from Edinburgh is an experienced playmaker who has previously played in England’s top league for Darlington Mowden Park Sharks.

The Scotland internationalist spent last season in France with Lille Metropole Rugby Club Villeneuvois, but Sarries head coach Alex Austerberry was keen to get her to the North London club once he knew she was available for 2019/20.

And, as he does with all new signings, Austerberry knew that if Martin was happy off the pitch then she would deliver performances on it.

“Watching from afar last year, Saracens were obviously the team to beat in the Tyrrells Premier 15s and I think on and off the pitch, they set the standard in women’s rugby,” Martin told TRU.

We're back at @AllianzPark this Sunday as we take on @WorcsWarriorsW in our second home game of the season!

Make sure you come down and cheer the team on!

“So, obviously being part of a dressing room full of international players and hearing how much the coaching staff wanted me to be a part of it helped to get me here, but I think the off-field stuff really motivated me as well.

“Alex is a big believer that if you want happy players on the pitch, then they have to be settled off the pitch and he was brilliant along with others at the club at helping me get my bearings in the local area and get work.

“That has made the transition pretty seamless and I am working at Saracens High School as a learning assistant. I am helping out with some of the kids who have additional need and who need a bit of help in the classroom.

“It really helps the kids in the local area get the education that they need without having to travel long distances while we do things a bit differently here and we try and drive the standards and ethos from the rugby side of things into the school.

“Discipline, hard work, honesty and humility are the key messages that we think about when we are at rugby training while at the school, they are also the key values that permeate through everything we do.

“The children enjoy living by these values and I think having the school connected to the rugby club is a great idea.”

The school opened its doors to 156 Year 7 pupils then, with a further 156 Year 7 pupils now having been taken on board for 2019/20. The school is set to move to a new purpose built facility in 2020 after which 180 pupils per year will arrive for a total school size of 1130 students.

In the first year of the school being in existence, over 100 pupils passed their first NCFE recognised qualification in Character Education, with the opportunity to complete three more.

Through the NCFE, students complete tasks in leadership, organisation, resilience, initiative and communication and in doing so, prepare them for the outside world once they leave school.

And Martin has learnt to be resilient in her own career on the pitch.

Until two years ago, she had never played her domestic rugby outside of Scotland, but spells with Darlington and more so in Lille, tested her and recently she has had to deal with the blow of not being on Scotland’s successful tour of South Africa under new head coach Philip Doyle.

As someone with 49 caps under her belt dating back to 2010, it is no surprise that Martin is determined to play her way back into the international fold as the team try to qualify for the 2021 World Cup in New Zealand.

It wasn’t pretty but job done and on to the next one ???? #rugby #saracens #thankyounext

“Of course, I want to play for my country everybody does, but in a way it has been good to have an extended period down here at Saracens to settle in,” Martin, who kicked four conversions in Sarries’ 28-24 win over Loughborough Lightning last weekend”, stated.

“If I keep playing for the club and get in a good run of form then hopefully that will get me noticed, but for me my focus has to be on Saracens because week in and week out teams want to beat us and we have to be ready for that challenge both physically and mentally.

“Last year, moving to France was an awesome opportunity for me. It was tough at times as the club was going through a major transition in terms of players and coaches.

“The experience certainly helped me as a rugby player and strengthened my communication while being a full-time rugby player for the first time was something that I had dreamed of since being a little kid and having that time allowed me to focus more on little aspects of my game.

“Everyone there was really welcoming, it was obviously something completely different, but it was a year I think that I’ll look back on when I’m older and see that it really helped my rugby and me as a person.

“And I have a real buzz about being at Saracens and working at the High School now. It is something else outside my comfort zone, but I like to push things and I feel I am fitting in well down here so far.”