Grant focused on a return trip to Twickenham 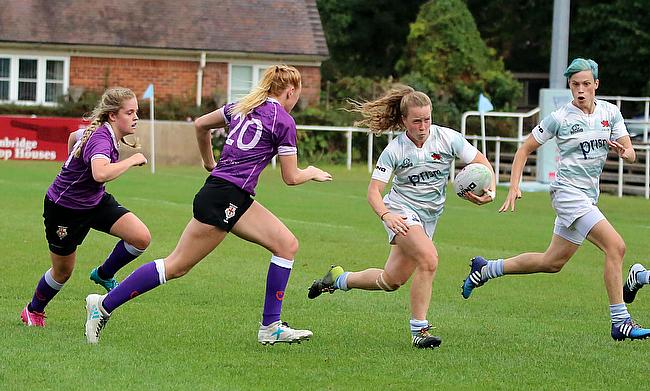 Coreen Grant on the charge for Cambridge University
©Leigh Chatten

Perfect six for Durham at the summit of BUCS Super Rugby
Exeter edge past Leeds Beckett to stay on top
Shanahan: 'Last year we lost too many lineouts and it cost us massively'
Swansea stun Bath to continue impressive start

Scottish rugby player Coreen Grant played at Twickenham for Durham University back in April and now she has her sights set on returning there with Cambridge University in December.

Seven months ago, Grant was on the losing side as Durham were defeated in the BUCS Championship final by the University of Exeter, but that is in the past now and going forward, she wants to help her new side Cambridge repeat last year’s Varsity match victory over Oxford on December 12th if selected.

Since arriving at Cambridge at the start of this academic year to study a masters degree within the English department, Grant has been busy with university work, playing for the Cambridge team and playing for the Saracens development team - but she would not have it any other way.

“It can be busy sometimes juggling academic work with training and playing for Cambridge and Saracens, but I make it work,” centre/wing Grant, 21, told TRU.

“Within the university rugby set-up, they are very understanding that academic work comes first, although I was caught out a bit as Cambridge don’t take Wednesday afternoons off for sport so I often have to dash off straight after the matches to a class!

1 month to go until @OURFCblues and @CURUFC clash at Twickenham Stadium for the 138th Varsity Match.?
?
Hit this link to get your tickets now! ??https://t.co/HDOZ9c2oiZ
?#VarsityMatch2019 pic.twitter.com/RlrShVEUpO

“Myself and fellow Cambridge student Bluebell Nicholls travel together to Saracens training and I think being in both environments is good for me because I am learning from lots of different coaches and different players around me.

“The Varsity Match has such a history and I would love to be involved in it, but it is still a few weeks away and firstly I just have to keep my head down and work hard to make sure that I play well until then and give myself the best chance of making the matchday squad.

“As I said, I am pretty busy with various things on the go at the moment, but I enjoy that and I enjoy pushing myself to improve as a rugby player.”

From rugby to American Football and back again

Originally from Edinburgh, Grant first dabbled in rugby when she was around 11-years-old before she spent three years in her early teens living in Los Angeles with her family.

“My family was always really into rugby and I had been along to Murrayfield a few times to watch big games, so when I went into senior school at Royal High, I was keen to give it a go,” the former Scotland age-grade cap explains.

“The coach of the boys team at the time was Graham Shiel [the former Scotland centre], I knew his son Charlie [who now plays for Edinburgh Rugby] quite well and Graham was happy for me to come along to sessions after school and play.

“Out in America in Pasadena in Los Angeles they make sport accessible to everyone, so I tried a year of American Football when I was in my ‘Freshman’ year in high school.

“It was good fun to try, but I definitely preferred rugby because as a game it was quite prescriptive, having to learn plays and then waiting to see which plays the quarterback wanted to run.

“Rugby seems more creative to me so when I came back to Scotland my friend Lucy Park [who has since earned full Scotland caps] was already involved at Murrayfield Wanderers so I headed down to training with her aged around 15 and never really looked back.”

Grant played with Wandies at under-18 levels and played alongside players such as Rhona Lloyd and Lisa Thomson who are in the current Scotland squad.

They won two Scottish Cups at under-18 level whilst Grant was part of the set-up and, indeed, after the 2014/15 final at BT Murrayfield, she received the player of the match award from Scotland cap Lisa Martin who she now plays alongside at Saracens.

“The rugby programme at Durham is growing all the time”

Her rugby journey then took her to Durham University in 2015.

She spent three years in the north of England - with a year in Melbourne sandwiched in the middle - and loved it.

“They have a collegiate system at Durham which means that everyone can give rugby a go and then from there, it feeds up into one of the biggest rugby programmes in the country,” Grant, who studied English Literature whilst there, said.

“There are now three women’s teams from Durham in the BUCS leagues and ever since I first went there in 2015 things have grown massively.

It is the eve of the #UniRugby finals at Twickenham so for starters, here is our #BUCSRugbyChamp Final preview ahead of the University of Exeter against Durham University...https://t.co/OApPXhyrpw#RoadToTwickenham pic.twitter.com/CdnRTIR4FC

“I was lucky enough to go straight into the first XV in my first year and that season I played mainly on the wing. In second year, I was made Captain, mainly played at centre and we reached the BUCS Championship semi-final before losing out to Edinburgh University who went on to win the competition.

“After a year in Australia, I returned to Durham last year as Vice-Captain and we made it to the BUCS Championship final at Twickenham.

“Although we lost the final to Exeter it was a memorable way to end my time at Durham playing on the main pitch at Twickenham.”

And fingers crossed she will be back there with Cambridge University next month.