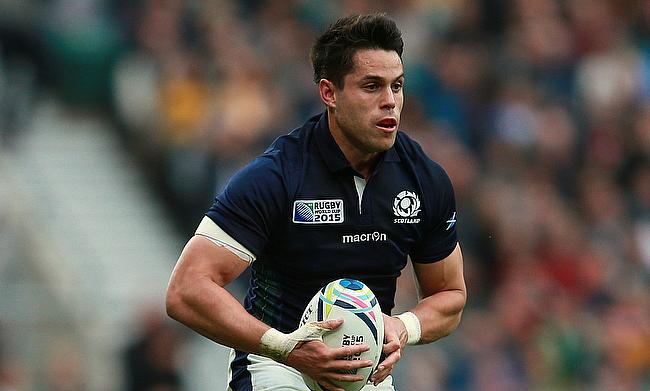 Scotland registered their second consecutive win in the ongoing Six Nations as they went on to defeat France 28-17 in the fourth round at Murrayfield Stadium on Sunday.

The win has taken Scotland to the third position in the table with 10 points from four games while the defeat ended France's Grand Slam hopes as they now are at second place in the table with 13 points. Scotland were also greatly helped by red card to France prop Mohamed Haouas at the stroke of half time.

Les Bleus started the game with setback as Francois Cros was sin-binned in the fifth minute for striking the head of Grant Gilchrist. Romain Ntamack had a tough game as he first missed a penalty goal and then had to leave the field in the ninth minute with an injury.

Adam Hastings kicked back to back penalties in the remainder of the first quarter to give the home side a six-point lead for the Dark Blues.

France got their breakthrough in the 33rd minute as a kick from Antoine Dupont set up Damian Penaud over the line while a conversion from replacement Matthieu Jalibert provided them a one-point lead but it was shortlived as two minutes later Haouas was sent off for a punch on Jamie Ritchie's face.

Scotland made full use of the opportunity as Hastings kicked a penalty goal followed by a Sean Maitland's try as Gregor Townsend's men had a seven point lead heading into the break.

There was no respite whatsoever for the visitors as Stuart Hogg and Sam Johnson set up Mailtand for his second try early in the second half and Hastings improved it to make it 21-7 before Jalibert's penalty at the stroke of third quarter's end reduced the arrears to 11 points for France.

Stuart McInally raced on to a loose ball as he struck Scotland's third try that came in the 64th minute with Hastings kicking the extras to restore 18 point lead for the Dark Blues which proved enough despite France striking last with a try from Charles Ollivon in the 77th minute.