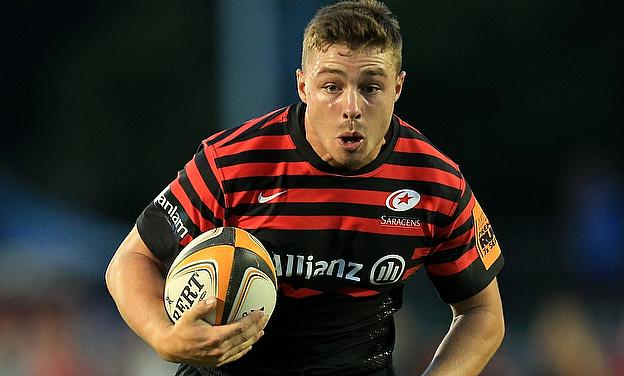 Aviva Premiership leaders Saracens claimed a 23-18 victory over Newcastle at Kingston Park with the home side snatching a vital bonus point in their battle against relegation.

Sinoti Sinoti scored an early try for the Falcons but Tim Streather and Ben Ransom crossed over for Sarries before Alex Tait grabbed a reward for Newcastle four minutes from time.

The home side got off to the best possible start with a try after just three minutes when Adam Powell's inside pass found Tait arriving at pace just inside halfway.

The Falcons full-back surged through to link with Mark Wilson and the big number eight threw out a long pass to Sinoti for the winger to shrug off two cover tackles and score in the corner.

Jack Wilson took out Tait in the air in the eighth minute to earn himself a yellow card, but Saracens showed why they are top of the table by scoring an impressive try while he was in the sin-bin.

Their 11th-minute score was a lesson in finishing and accuracy started by Alex Goode and ending with an easy finish for Streather after some adept handling from Matt Stevens, Alistair Hargreaves and Jackson Wray.

Charlie Hodgson added the conversion from wide out for good measure and kicked an 18th minute penalty to make it 10-5 and dent the Falcons' early optimism.

Saracens were denied two further try-scoring chances by Newcastle tackling and when Joel Hodgson nailed a 48-metre penalty in the 37th minute, Peter Russell must have been reasonably happy with a 10-8 scoreline at the break.

Newcastle were poor at the restart and turned the ball over to concede a penalty which Charlie Hodgson booted over for 13-8.

The Falcons pack pressured the Saracens scrum and a 57th minute penalty at the scrum saw Joel Hodgson cut the lead to two points before Eoin Sheriff was fortunate to escape a yellow card with a tackle on Sinoti which appeared high.

Newcastle quickly went backwards at successive scrums and a penalty saw Charlie Hodgson ease Saracens 16-11 ahead before the Falcons shot themselves in the foot.

Sinoti threw a wild pass to no-one 30 metres from the Saracens line and Ransom snapped it up to race away for a try converted by Charlie Hodgson.

Newcastle threw everything into attack in the closing minutes in search of a vital losing bonus point and they were rewarded when Tait scrambled over and the try was eventually confirmed by the TMO. Godman added the extras.