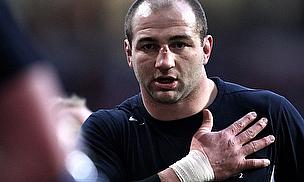 Borthwick, 34, will retire at the end of the season but sets a new record in tomorrow's top-of-the-table clash with Leicester.

And McCall says he was made a scapegoat for a failed regime during his time as England captain between 2008 and 2010.

He was first appointed as captain by Brian Ashton during the 2008 RBS 6 Nations, led the disastrous tour of New Zealand that summer and was retained as captain when Martin Johnson was appointed later in the same year.

Borthwick suffered a knee injury in 2010 and was not picked again with many unfairly suggesting he had been the fall guy for the team's lack of success.

"Steve has had a rough ride. He took unbelievably unwarranted criticism during his England days," McCall said.

"He carried the can for an underperforming organisation, which is not fair.

"Steve's reputation was tainted to a very unfair degree. He hasn't talked to me about this, this is my opinion.

"He deserves far, far better than that because he's the best person you can have at a rugby club. A good bloke, a good leader and model professional.

"Why he has the reputation he has is beyond me. If you get that much public criticism, it's going to cause some damage. It has to.

Borthwick could end his 15th season in professional rugby by leading Saracens to a Premiership and Heineken Cup double with semi-finals in both competitions on the horizon.

"We've all had captains who were great leaders by example, or who could press the right buttons and motivate people, or who were very good strategically and could change things around," McCall said.

"But Steve is all of those things and that's unbelievably rare. He's probably the first captain in my experience who has everything and can do all of those jobs.

"He'll leave a big hole in our organisation when he leaves."

Borthwick will pass the mark set by Leicester's George Chuter but McCall believes his man is more deserving of praise.

"It's remarkable for a second row. If you look at his minutes compared to Chuter's, there's a big difference because Chuter was on the bench a lot," McCall said.

"George Chuter's achievement was a good achievement, but Steve's is phenomenal given he started almost every one of those matches.

"These are his last five or six games of rugby and fingers crossed we can send him off on the right note."