McCall playing it safe with Goode 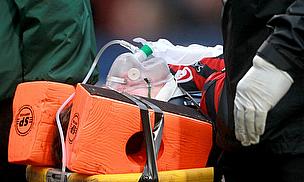 Saracens director of rugby will be playing it safe with England full-back Andy Goode, who was concussed during Saturday's Heineken Cup quarter-final win over Ulster.

Goode left the field on a stretcher after being taken out in mid air by Jared Payne after five minutes at Ravenhill.

Saracens went on to win the game 17-15 to qualify for the semi-finals and Payne, who will now serve a two-week ban, was sent off.

However, McCall says that Goode could have suffered a serious neck injury in the incident and added that he is unlikely to feature in Sunday's Aviva Premiership match against Northampton.

"Alex is OK, but we'll see how he goes. He was pretty shaken up afterwards," McCall said.

"We're not going to take any gamble now with Alex, his health is far too important. It's highly unlikely he'll play this weekend.

"He could have got a serious neck injury given the way he fell."

Much debate has centred on whether Payne's act was intentional or otherwise, but McCall is instead focussing on the welfare of his player.

"It was an unintentional act, he didn't mean to do it, but we have a player who is injured at the moment. I only care about the player who's injured," McCall said.

"Anybody I've spoken to who has played in the back three and any referees I've spoken to agree it was a red card, whether it was intentional or not. You still have duty of care."

Saracens are facing something of an injury crisis towards the end of the season with South African number eight having recently undergone knee surgery and Scotland centre Duncan Taylor sidelined with a hamstring problem.

"We've lost three important players and that's because of the nature of these games unfortunately," McCall added.

While flanker Will Fraser and lock Alistair Hargreaves have returned from injury, they will not be fit enough to play against Newcastle.

In some positive injury news for Saracens, England number eight Billy Vunipola showed no adverse reaction from the ankle problem that ended his RBS 6 Nations campaign as he made his comeback against Ulster.