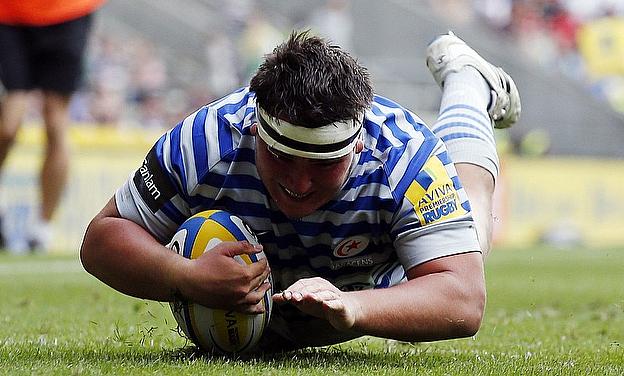 Saracens maintained their position at the top of the Aviva Premiership table with a bonus point 32-20 win over local rivals Wasps at Adams Park.

Wasps, without Joe Launchbury and Matt Mullan in their pack, were second best to a strong Saracens line-up with the visitors scoring four tries through Jamie George (two), Jackson Wray and Alex Goode. Charlie Hodgson kicked a penalty and two conversions with replacement, Owen Farrell, kicking a further penalty and conversion.

Wasps, inspired by scrum half Joe Simpson, managed three tries from Tom Howe, Jonah Holmes and Carlo Festuccia. Andy Goode did kick one penalty but missed four other kicks which prevented his side from remaining in contention.

Wasps fielded a weakened pack with Launchbury and Mullan being rested to comply with EPS Regulations. Ashley Johnson was also an absentee with a fractured cheekbone. Elliot Daly and Andrea Masi switched positions from last week's win at Worcester with Daly resuming his preferred centre role.

Saracens captain Steve Borthwick was selected to make his 262th Premiership appearance, which equalled George Chuter's record. Farrell and Schalk Brits were on the bench with Hodgson and George starting in their positions.

Saracens began strongly and took an early lead through a penalty from Hodgson but they soon suffered a temporary blow when Neil De Kock had to leave the field following a heavy tackle.

Andy Goode had Wasps' first chance for points but he was wide with his penalty attempt before De Kock returned to the field. This was in time to see Hodgson miss the chance to put his side further ahead as he fired wide with a penalty chance.

It mattered little as Saracens scored the first try of the game. Duncan Taylor made a huge break in the home defence to send Wray crashing over the Wasps' line for Hodgson to convert and the visitors were 10-0 up at the end of the first quarter.

Goode should have put Wasps on the scoreboard but his straightforward penalty attempt rebounded back off the posts. The home side briefly lost James Haskell with a cut eye but they maintained their pressure. Saracens lock Mouritz Botha was sin-binned and from the resulting penalty Goode kicked Wasps' first points.

Worse was to follow for the Saracens when Chris Ashton made an absolute howler of attempting to deal with a speculative up and under from Simpson. He totally misjudged the flight of the ball before falling over to allow Holmes the opportunity to dive on the loose ball for the try.

Botha returned from the sin-bin to be part of the pack which drove over the Wasps' line following a line-out. George was the try scorer and Hodgson's conversion gave Saracens a 17-8 half-time lead.

After the restart Wasps received a further set back when Daly was forced to leave the field with a shoulder injury but they responded with a splendid try. From a line-out 30 metres out, Simpson made an excellent break to put the Saracens' defence on the back foot. The ball was swiftly recycled for Howe to race over in the corner.

Alex Goode then dummied past two defenders for the visitors' third try which Farrell converted, before kicking a penalty to give Saracens a 27-13 lead going into the final quarter.

Wasps never looked like clawing back that advantage and conceded a fourth try. Wasps' replacement Sam Jones was yellow-carded and Saracens capitalised when George again forced his way over from a driving line-out.

However Wasps had the final say when Festuccia scored their third try moments from the end.