Rob Baxter: “Getting over it is no different to what we have always done" 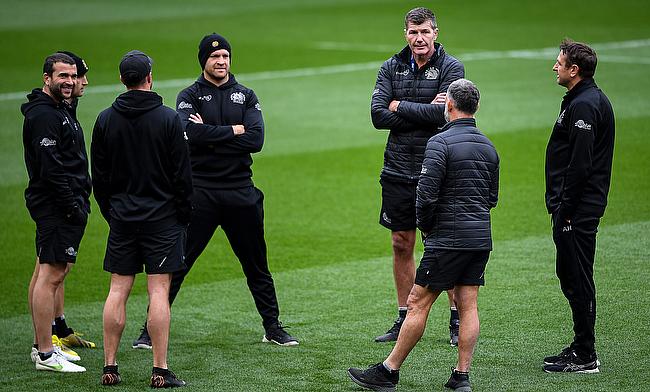 Most people would have been surprised last weekend when Rob Baxter’s Exeter Chiefs suffered their first loss of the Gallagher Premiership season.

Playing the side they vanquished in last autumn’s Premiership final, Lee Blackett’s men were by far and away the superior team last Saturday, crossing the whitewash on five occasions to put Exeter’s hopes of a fifth consecutive bonus-point win in the league on hold.

Joint on points with Bristol Bears at the top of the Premiership table, this weekend will see the two sides face-off at Sandy Park. On Wednesday, Baxter confirmed in his press conference that several members of the Exeter squad had returned positive tests for Covid-19, but he was adamant that Saturday’s game will take place.

It is an unusual situation for Exeter to be in, the team so well known for winning. Currently, in the process of resting all of the club’s senior internationals, Baxter says that it was highly unlikely his side would have won every game they played this season.

“It is a funny one isn’t it?” Baxter said. “Because all the questions I have had about the game since, it is like there is an element of shock about it. Like I said afterwards, we were never going to go, well I suppose you theoretically can go a full season without losing, but there is a reality to the scenario.

“You don’t have to be far off to lose to teams in the Premiership, that is why the Premiership is such a good competition because it is massively competitive and if a team are good on the day and another team are a bit off, things just tend to go that way and that is a little bit of what happened to us.

“Getting over it is no different to what we have always done. There have been plenty of losses in the time I have been involved in the Premiership and we lost last season and won a double.”

With there still being a relative uncertainty over the Champions Cup next weekend, with some rumblings as to whether French sides will boycott European competition due to the threat that the new variant of Covid-19 poses, as well as the UK being back in a national lockdown, there is an increasing argument as to whether there should be a mid-season break or if continental fixtures are entirely necessary given the current global situation.

Exeter have already had a fixture in their calendar affected by the virus, their hotly anticipated Champions Cup pool game against Toulouse falling by the wayside. As holders, many were excited to see how the Chiefs would fare against the French club who were littered with international stars.

Following a Covid-19 breakout in the Exeter camp, the trip to the south of France was called off and Toulouse awarded five points. Since the opening European block of fixtures, five Premiership matches have been called off -including the upcoming East Midlands derby - and Baxter said that as much as Exeter found it difficult not playing, they were completely understanding of the decisions made.

“Why was it tough? It was tough because of the bigger picture. If this season is a battle to get through and we get through it okay and unscathed, and when I say unscathed, I mean with no health issues amongst the people we know and at the club, you have done a pretty good job and anything you can get out of it positively on the rugby field is more than a bonus.”

Still resting several of his international stars for this weekend’s game at Sandy Park, Baxter is once again taking the opportunity of senior players being away to give youngsters the opportunity in the first team.

With the Championship and National Leagues still yet to return, the latter again under review following the latest lockdown, youth will be highlighted even more during the Six Nations as established international players will be away for the best part of two months as the competition takes place.

“I am kind of looking forward to it (international players being unavailable), with my hands over my eyes kind of thing, seeing what will happen,” Baxter said. “But I think you have got to take the approach that you will become a better, stronger squad through exposure.

“I think an over-reliance on say 25, 28 players, I am not sure that actually really develops you over an extended period during a time where there is no Championship rugby and younger players are not getting anything else.

“We have got quite a large contingent of our young players what are based at Exeter University or are at university. They are not even getting any university rugby and I think that development stage, literally the opportunity is now to develop and play is in a Premiership game.”