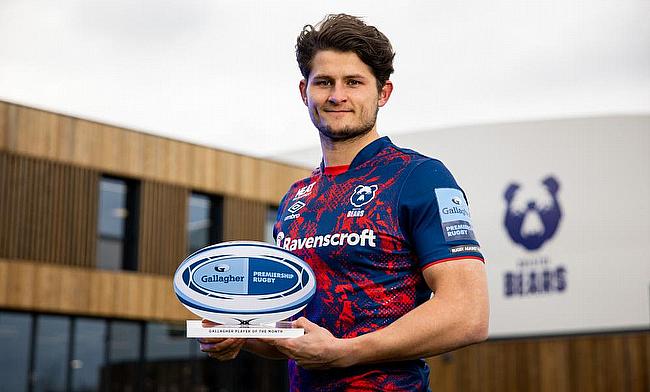 Bristol Bears' centre Piers O’Conor was today acclaimed as “a star in a star-studded team” as he was named Gallagher Premiership Rugby player of the Month for January 2021.

O’Conor was in scintillating form for the Bears in January as his club won all three matches, beating Newcastle Falcons, champions Exeter Chiefs and Bath Rugby to end the month top of the Gallagher Premiership table earning the praise of BT Sport’s Ugo Monye.

“It’s hard to be a star in a star-studded team, but he’s been unbelievable this year,” said Monye, who is also a Gallagher ambassador. “He’s been Mr Consistency this month, not just in terms of what he does in attack but in defence as well. He creates opportunities and takes them as well.

“For me, he’s a proper club man that is woven into the fabric of what it is to be a Bristol Bear - so for him to receive this award is outstanding.

“Considering there were five Bristol Bears nominated for the award for January, to stand head and shoulders above his peers is a wonderful achievement.”

O’Conor’s role at the Bears is often underestimated but Monye’s analysis of the centre reveals his influence on the team: “He’s often the fire-starter for what they do. Piers has got so many strings to his bow, especially in attack, and it’s great to see the Bears using him. The partnership he’s developed with Semi Radradra is quite a devastating one – a real headache for any defensive coach.

Although Covid-19 restrictions prevented a physical presentation of his award, big Bears fan and managing director of Gallagher’s 70-strong team in Bristol, Andy Ferguson, said: “Watching the Bears storm to the top of the table after back-to-back wins in January has been fantastic for all of us fans, especially during such challenging times, and Piers has been instrumental to that success. He’s such a versatile player, able to unlock holes in the opposition’s defence and deliver that difference. A very worthy winner.

“One of the great things about rugby is that it’s a real community sport, even at the elite level, and seeing the Bears riding so high in the Gallagher Premiership is really helping to lift spirits across the city. We can’t wait to get back inside Ashton Gate to show our support as a local business.”

Monye, who won 14 caps for England also suggests that 25-year-old O’Conor could easily come into Test reckoning: “There’s no reason why he can’t be selected for England, he’s quietly going about his business and keeping his head down and doing what he’s doing,” said Monye.

“If he continues to play the way he plays and Bristol keep being involved in big matches towards the end of the season, whether that be in European rugby or Gallagher Premiership Rugby, it’s very hard to ignore players like him.

“That statement victory against Exeter Chiefs was tremendous, and then their biggest ever Gallagher Premiership Rugby win against Bath Rugby - some of the rugby they’ve been playing has brought a lot of warmth and joy to a lot of people in a period where it’s been extremely tough.

“The way that Pat Lam talks about inspiring the community with their rugby, well they’ve done that last month.”

O’Conor – as part of his prize for being named Gallagher Premiership Rugby Player of the Month – wins a shirt signed by the whole Bears squad and framed by Gallagher. He is donating his signed shirt to the Wooden Spoon charity, Bristol, Bath and Somerset division.

O’Conor was judged by a panel of experts as the player who made the biggest impact in Gallagher Premiership Rugby in January 2021.