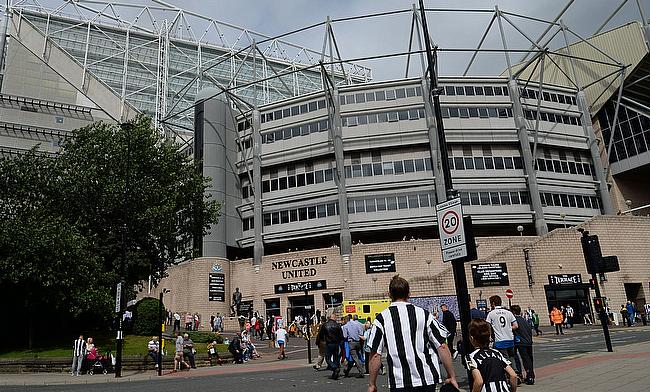 Around 25,000 tickets has been sold at St James' Park that hosts Newcastle Falcons and Northampton Saints on Saturday
©PA

Fiji international Josh Matavesi said he and his Newcastle Falcons team-mates are relishing on the opportunity to play at St James' Park that will host the upcoming Aviva Premiership encounter against Northampton Saints on Saturday.

The Falcons move from traditional Kingston Park to the home ground of Premier League club Newcastle United F.C. that has the capacity to host double their previous biggest home crowd.

“The players are excited and there’s definitely a bit of an edge around training," said Matavesi.

“Everyone knows it’s a big game, I like the fact that training has been a bit niggly and it just shows that boys are battling for places. We’ve definitely stepped things up this week, and you can sense this is a big one.”

The last time these two teams met, the 27-year-old came up with a man of the match performance and the Falcons also will be brimming with confidence having won the last four games against Northampton Saints in Aviva Premiership.

“We know they’re in a different place now to where they were that night, but it was another positive memory for us,” said Matavesi.

“It was a perfect night for rugby, the entire team performed and it was a real collective thing rather than any one player being the star. We didn’t let the game get away from us, we showed huge character to take it at the end and we know they’ll be chomping at the bit to even the scores.

“For us the key is treating it like another game. Clearly there are a lot of things going on around it, left, right and centre, but it’s just about us sticking to what we do and continuing the form we’ve shown all season.”

With close to 25,000 tickets sold, Newcastle Falcons will be backed by a different atmosphere than they are used to and Matavesi stressed the importance of not allowing the situation overhaul them and insisted that it will be business as usual for the club as they eye a top two finish.

“The crowd at Kingston Park is awesome and they really make a noise, so with the numbers we’re seeing for Saturday it should be an incredible atmosphere at St James’ Park,” he said.

“It will make a big difference for the boys, and we really do have to thank everyone for coming out and supporting what is a really big deal for the Falcons as a club.

“The training week is not that different in the sense that we’re in our usual little bubble at Kingston Park for the duration, we’re preparing as normal for the game and we’re in our familiar surroundings. All we’re focusing on is getting our roles right, and if we do that then we’re in a good position.

“Northampton are a side who are coming back on the up with Alan Gaffney now in charge, things are starting to change for them and they’ve got good players.

“They’ll be saying the same about us, I’m sure, and we’re in a good position so we can rightly take a lot of confidence into the weekend. We all know our game plan, we know our roles within it and Northampton are a team we’ve already beaten this season. Hopefully we can do it for a second time and put ourselves into a really good position for the run-in to the play-offs.”