Newcastle Falcons support Doddie Weir with 'The Big One’ 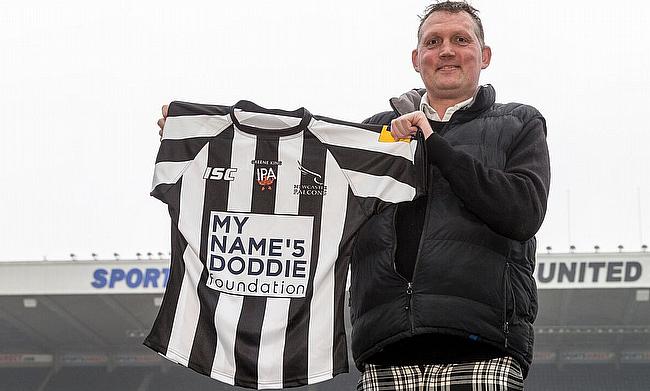 Newcastle Falcons will wear a special edition black and white striped shirt when they play 'The Big One' at St James' Park on Saturday March 24, with all profits from sales of the kit going to the My Name'5 Doddie Foundation.

Newcastle Falcons will wear a special edition black and white striped shirt when they play 'The Big One' at St James' Park on Saturday March 24, with all profits from sales of the kit going to the My Name'5 Doddie Foundation.

The Aviva Premiership clash against Northampton Saints takes place at the home of Newcastle United Football Club, and the Falcons will be donning NUFC's traditional colours to raise funds for research into Motor Neurone Disease (MND).

Falcons and Scotland great Doddie Weir was last year diagnosed with the currently-incurable condition, and has made it his mission to improve the levels of research into MND.

The logo of his My Name'5 Doddie Foundation will appear in the main slot on the front of the special edition kit, with regular home shirt sponsors Greene King generously donating the space.

The shirts will be priced £49.99 (sizes XS to 7XL) with all proceeds minus production costs going to My Name'5 Doddie. Numbers are limited, with supporters able to pre-order by visiting https://www.shopfalcons.co.uk/

The shirts worn by Newcastle Falcons players will be auctioned off after the game in aid of the foundation, with a bucket collection at St James' Park on the day raising further funds.

Ticket sales from The Big One can also benefit the My Name'5 Doddie Foundation, with a special category of £25 tickets seeing half the money after VAT being donated.

Newcastle Falcons' commercial director Mick Hogan said: "This is a great opportunity for us to help a club legend in Doddie and to raise as much money as possible for research into MND.

"The design is based around Newcastle United's iconic black and white stripes to mark the fact that this historic fixture is being played at St James' Park, and hopefully it will help more football supporters to engage with rugby for the day.

"We owe an enormous thank you to our regular home shirt sponsors Greene King for generously agreeing to move their logo, enabling the My Name'5 Doddie Foundation to gain tremendous exposure in this major televised fixture.

"Doddie is a Falcons legend who has worked with the club for many years even after retiring as a player, and it is our absolute pleasure to be able to assist with his fundraising effort into MND.

"I am sure our supporters will back the initiative on what promises to be a huge day for the club, and that these special edition kits will be a memorable souvenir."

For more information on the My Name'5 Doddie Foundation visit https://www.myname5doddie.co.uk/