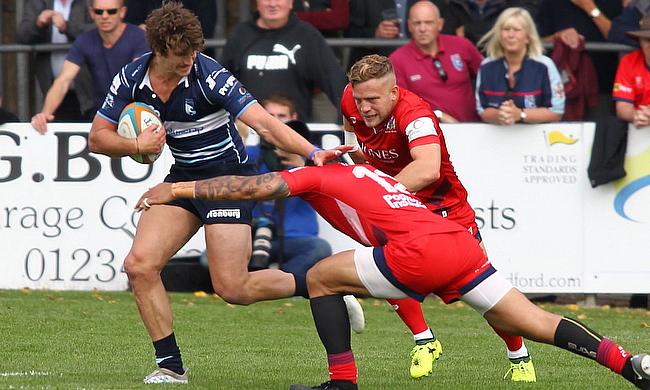 Nizaam Carr signs permanent deal with Wasps
Saracens stun Wasps 57-33 to reach Premiership final
Wasps seal third spot with 22-39 win over Newcastle Falcons
Rich Lane: “It is what you want out of it and for me, it was all about playing.”

Michael Le Bourgeois has spoken to Talking Rugby Union about his move to Wasps – including why it was far from straightforward to leave Bedford and his excitement of playing in the Gallagher Premiership.

Wasps secured the signatures of five Green King IPA Championship players at the start of last month with the Bedford back arguably being the standout name.

The 27-year-old was announced as the Championship Player of the Season in the same week as he moved to the Ricoh Arena after helping Bedford finish the 2017/18 campaign in third place.

Before his move to Goldington Road, Le Bourgeois made more than 100 appearances for Jersey and after progressing from the third tier into the Championship, he is now ready to take his next step.

Speaking ahead of pre-season with Wasps, Le Bourgeois revealed how tough it was for him to leave Bedford after five years with the club.

Wasps make ??? signings from the Championship.

“Moving to Wasps was one of the hardest decisions I have had to make in terms of my rugby,” he said. “The decision was a lot harder than everyone seems to think! It was not a straightforward answer.”

“Bedford is such a fantastic club to be a part of. On the field, we were allowed to express ourselves and the boys brought excitement with our style of play which was what Mike [Rayer] gave us the opportunity to do. We had a great squad this year.

“Off the field, it’s nice to go in the marquee after a game and have your food and enjoy yourself with the fans who support you week in week out. That is something you probably don’t get at other clubs and it is a really special club.

Reflecting on the decision he had to make, Le Bourgeois admitted it was “the right time” to take the opportunity to join Wasps and move into the Premiership.

But he insists the chance to play for Wasps and the personal accolades he has won this year are down to everyone involved at Bedford.

Greene King IPA Championship Player of the Year. Bedford Blues Players Player of the year. That is some season for Michael Le Bourgeois #COYB #BluesFamily pic.twitter.com/aZetCDqMAn

“It was one of my better weeks!” Le Bourgeois added when asked about his award and signing for Wasps. “To win [the award] was a real honour.

“I accepted it on behalf of the Bedford squad really. Without them, I wouldn’t get the chance to get the ball or anything like that!

“Signing for Wasps came on the back of a good season with Bedford and that again is down to the squad and I owe a lot to them.

“There are a lot of different factors why I chose Wasps but at the end of the day, I want to keep pushing myself. I have got to take the opportunity. For me, it is a new chapter. I felt it was the right time for me to push myself into something new.”

With Wasps’ campaign finishing just under a month ago following their Premiership semi-final defeat against Saracens at Allianz Park, the Midlands-based club don’t kick-off their pre-season until June 25th.

Some clubs did return to the training field at the beginning of this week and Le Bourgeois can’t wait to get started and meet up with his new and “exciting” team-mates.

He added: “I am still enjoying the summer really, but I am itching to get going! Wasps have sent me some stuff to keep me ticking over so I am excited for this season to see where it leads.

“There is a huge amount of talent in the squad. Their backs are lightening and are exciting to watch. It seems like a lot of fun! I am excited to be a part of it.”

Le Borgieous made 21 league appearances for Bedford last season, but now the challenge is to try and gain a first team spot in a Wasps side full of talented individuals.

Rugby journalist Brendan Gallagher tweeted when Le Bourgeois signed for Wasps that “he would be talked about in terms of England if he was playing in the Championship”, but the versatile back is purely focused on club duties.

“Without sounding too bad about it, I am not going to just to take part,” he said. I want that starting jersey. I am there to enjoy it and enjoy it with the boys, but I want to be pushed to see how far I can go.

“It is always very flattering to hear people talking in a positive manner, but for me, my concentration is on this year and this pre-season with Wasps. I can only take it as it comes. If something happens, then great, but my 100 per cent focus is on Wasps.”