Rich Lane: “It is what you want out of it and for me, it was all about playing.” 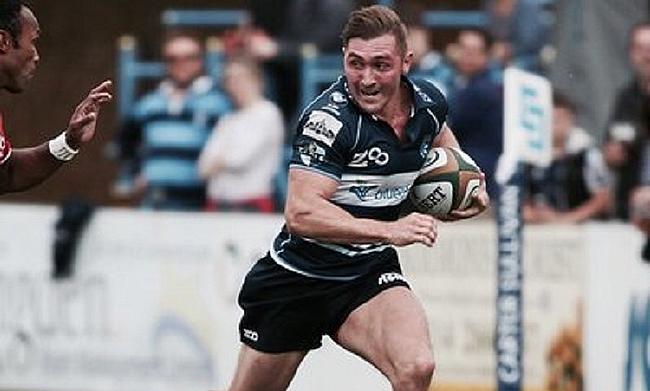 Rich Lane believes the GK IPA Championship is a brilliant league for any player looking to develop their game.

The Bedford Blues back says the second tier of English rugby is an excellent platform and he hopes the RFU will have a better idea of what they want to gain from the division in the near future.

Lane moved to Goldington Road in 2017, but previously he plied his trade at this level for Jersey Reds after a spell with Premiership side Bath.

He has scored 11 tries this season for Bedford – helping Mike Rayer’s side to third place in the division behind runaway leaders Bristol and the impressive Ealing Trailfinders.

“I have learnt loads in the Championship,” Lane told TRU.

“I think you can only learn so much by training every week because ultimately, you are a rugby player and you have got to play. The things I was learning at Bath, I wasn’t able to put into practice.

Congratulations to Saturday's @AFLtd Man of the Match @RichLane1, earning himself a bottle of Champers to go with his two meat pies #COYB pic.twitter.com/Jo9NPSQB3D

“I am a player and I am focused on just playing, but it is one of those where I don’t think the RFU really know what they are getting out of the Championship.

“Just from playing at this level for a few years, there are some unbelievable players in this league who, given the opportunity, would make the step.

“It is unreal for young guys who aren’t getting the game time to come and play on loan and develop. It is what you want out of it and for me, it was all about playing.”

Bedford’s team for their penultimate GK IPA Championship fixture of the season against Nottingham highlights Lane’s point with the likes of Saracens starlet Rotimi Segun aiming to get minutes under his belt.

For Lane, his first season with Bedford has been a successful one following a series of frustrating injuries, but his decision to stay at the club for another season shows just how important game time has been for the 24 year-old.

Really pleased to be staying @BedfordBluesRFC for another year! A great club with the best fans and such a good group of boys! #COYB ?? https://t.co/qFNP3nhPAn

“I am loving it,” Lane said. “It is a massively enjoyable place to be. We have a great bunch of boys and coaches too and there is a real family atmosphere about the club.

“For me after a disappointing year last year with injury at Jersey, just to be back playing most weeks has just been great.

“The environment at the club is one of the reasons why I wanted to stay on for another year. We have a really good attendance and it is also the little things as well.

“I also played for the ‘Junior Blues’ and my parents live not  far from Bedford so, if you like,  I have come home and it is just a real nice place to be with a great group of people.”

Bedford are currently on course for their best finish in the Championship since reaching the play-off final in 2013 where they were beaten over two legs by Newcastle Falcons.

With the play-offs scrapped for this season, Bedford will be targeting the bronze medal and Lane thinks that would be a pleasing campaign for the Blues.

“On the whole, we are very happy. We have still got a few games left to play which I think will decide how the season has gone,” he said.

“We have games coming up against Nottingham and Richmond so I think if we go well in them, then you are looking at finishing third which would be a very good year.

“It is a very competitive league and it is one of them where anyone can beat anyone. No play-offs this year has been an interesting one because it has kind of felt like an anti-climax towards the end of the year, but obviously, it is great for Bristol who have gone up and deservedly so.”

Bedford’s last shot at promotion came five years ago and Lane believes the task of challenging for the GK IPA Championship title will only become more difficult, but feels his current club are more than capable of aiming for the top.

He added: “Bedford have been a team which has always been there or thereabouts. The club has always been a breeding ground for guys who have come to Bedford and then gone on to play in the Premiership and on the international scene so I don’t think the club have anything to prove.

“We know it is going get tougher with the likes of Ealing doing so well again and it looks like London Irish may come down too so you have to just try and go again and hopefully we can continue to push.

“I don’t see why we can’t challenge and make the next step. We are a sustainable club. Ultimately it will be up to the higher powers in terms of what the next move will be. As long as we are putting the performances in on the pitch, then there is no reason why we can’t keep progressing.”