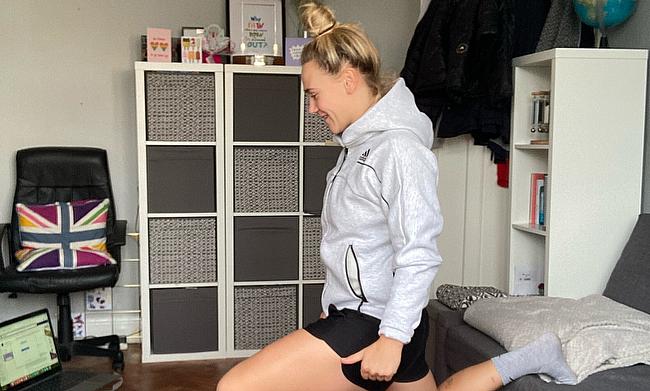 Exclusive: England Sevens star Abi Burton on crowdfunding their Olympic dream and fighting for change
Exclusive: Dan Norton – 'Finding Ways to Move Forwards'
Exclusive: Sydney Gregson on why her goals haven’t changed
Exclusive: Phil Burgess - I had prepared myself to leave at this point

Following a difficult year for England’s Sevens players, who had started their season believing that it would end in Tokyo, they are now self-funding their Olympic ambitions.

After being made redundant by the RFU as part of their coronavirus enforced cuts, England's Sevens stars have gone on to successfully launch a Pledge Sports page and the group are also giving back to local communities.

At the start of the most recent national lockdown, the players aligned with Lions Sports Academy and prior to the new three-tier system being introduced, Amy Wilson-Hardy, Tom Bowen, Abi Burton and Megan Jones have been providing free online fitness sessions to children across the country in order to help keep them fit.

On the 14th of December, Bowen and Jones will be able to do a fitness session in the flesh as they will be heading to a school in Surrey to help pass on the information that they have gained as professional athletes.

Each have been mainstays of the England programme for much of their adult lives, Jones travelling to Rio de Janeiro as a 19-year-old as the 13th player for Team GB.

“Companies like Lions are really important to us as a squad because it shows that not only have we got the backing of the Pledge Sports page, but that companies see this as a business and a prospect as well,” Jones told TRU.

“They see the value of it, and I think that is the bit that we want to get out there, that as players, there is value in us. We are not just rugby players; we get taught so many things. From psychology to nutrition, to physical activity, to mental health.

“Those are things that can be passed on to the younger generation and I think that is the main thing, it is always about the future. The future is the next best thing, so we have that next generation in sight.”

Established in 2016, Lions Sports Academy have made a pledge to provide sporting opportunities in order to help children and young adults realise their potential through physical activity.

Just a week removed from her first in-person visit to a school, Jones says that it did take her a while to get used to virtual fitness.

“It was a little bit weird to begin with,” Jones said. “The first one, I was just trying to get my head around it, but the second one got a bit better. Because you are kind of speaking to yourself, you don’t really get that feedback and as a coach, you look for that feedback and that personal feedback so going into schools will be a lot easier and will hopefully boost a lot of interest as well.

“It (online classes) was mainly about just getting people active as soon as possible, especially in lockdown, it is just hard and that was the most accessible way.”

For Jones, she is also still remaining positive about her own future.

When the RFU took the decision to cut the Sevens programme, there was an outcry. Over the years, England have medalled at Rugby Sevens World Cups, Commonwealth Games and even at the 2016 Olympics as part of Team GB.

A bit more 7s chat from the excellent @ruaridhmcc in our Bath piece this morning, but don't forget, @joeharvey34 has spoken to:

Read all of their thoughts on the situation here ??https://t.co/RCpsNP7c0B pic.twitter.com/NiOpqbhCCV

TRU heard from the likes of Abi Burton, Dan Norton, Phil Burgess and Alex Davis in the wake of the decision, as the players began to group together in order to keep moving towards the rescheduled Olympics.

Jones, herself, has signed with Giselle Mathers’ Wasps Ladies RFC in the Allianz Premier 15s and the fly-half has represented the club in five games so far this season.

Like the rest of her Sevens colleagues, she remains steadfast in her hopes of getting on that plane to Tokyo, as well as helping others with their fitness through the Lions.

“England Sevens and Lions joined forces to offer free, online fitness sessions for children and it is something that sits well with me because I think kids need to be as active as possible,” Jones added.

“Fitness is something that I value as a rugby player and as a person. I think mental health is important, but I think physical health drives that as well. Working with Lions is a good opportunity as well, to promote the England Sevens side of things, but also the way these guys (Lions) work with kids and looking at that platform as well for us.

“They have got online sessions, but we can go into schools soon and Tom Bowen and I are doing that and it will be really good because it can showcase what England Sevens is about.

“We are all about giving back to local communities alongside the Lions Academy who do a fantastic job with integrating kids into rugby and physical activity.”