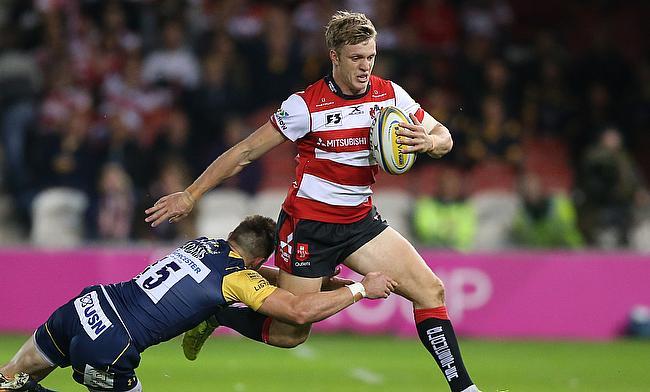 In a tense affair at the Ricoh Arena, Gloucester defeated Wasps for the second time this season.

Despite having been down to 14 men for much of the affair following Ollie Thorley’s red card, George Skivington’s side took home four points thanks to their dogged determination and intensity, despite their disadvantage.

TRU’s Joe Harvey was at the game…

Whilst 17 points may have been scored in the first half, all the talking points were surrounding Ollie Thorley’s red card. Chasing a kick, after Wasps’ Rob Miller collected the ball, the two backs collided, leaving the England international needing stitches.

Waved away initially by referee Matthew Carley, following a lengthy conversation with his TMO, the Gloucesterman, who by this point was in the changing room receiving stitches, was red carded for the head-on-head collision.

By that stage, Gloucester were already leading thanks to Santiago Socino’s try, the Argentine international latching onto the end of a Cherry and White maul to open the scoring and 20-year-old fly-half George Barton added the extras from the touchline.

Just moments after the red card, a humungous hit on Miller by Santiago Carreras led to something of a fracas. Coming in late to the melee was All Black Malakai Fekitoa. His say in those proceedings earning him a 10-minute break after he pushed and grappled with an opponent.

With the man advantage reduced, Gloucester soon set to work, dragging their opponents all over the Ricoh’s turf. Firstly, they added a Barton penalty, before scoring a superb try through Chris Harris who benefitted massively from Lewis Ludlow’s break.

Wasps ended the half somewhat aggrieved when the freshly reintroduced Fekitoa crashed over the whitewash with plenty of bodies clinging on to him. Immediately the referee looked to his TMO for answers but did not see enough to give the home side at least five points, bringing a close to the first 40.

In football, the hairdryer at half-time is always referred to. These days, it is probably not best to stand over players whilst shouting, but whatever Lee Blackett and his staff said at the break, it certainly worked.

Within 10 minutes of the game resuming, Wasps were within touching distance. Firstly, James Gaskell crashed over, the lock benefitting massively from Miller and Josh Bassett’s trickery on the left wing. Umaga added the conversion but was unable to when next called upon.

It was another beautiful score, this time conjured by tighthead prop Jeffrey Toomaga-Allen. The goliath found space in the midfield before hearing the call of Miller behind him. He offloaded to his full-back who scored relatively unopposed.

From that point, the game descended into the pattern we had experienced in the first half, with penalty after penalty conceded, scrums misfiring and lost lineout balls.

Eventually camped in the Gloucester 22, Wasps found a way to nose themselves ahead. Driving towards the tryline again and again, Ben Vellacott fed the ball to Bassett on the blindside and the wing pinballed off Jamal Ford-Robinson to place the ball down behind his head with Lewis Ludlow wrapped around his waist.

The evergreen Jimmy Gopperth added the conversion from the touchline to inch Wasps ahead with less than eight minutes left, but eight minutes was more than enough time to allow 14-man Gloucester to snatch victory.

Ford-Robinson’s powerful scrummaging some 30+ meters out gave Billy Twelvetrees his first placekick of the game. Stroking that home masterfully, the 32-year-old put his team in the ascendency.

He’d have another opportunity with mere seconds on the clock remaining, but this time the centre’s attempt at three points was well short of its target.

Despite this, Wasps were unable to monopolise. Their lineout ball was disrupted and they were then ushered into touch to condemn them to a second defeat of the season at the hands of George Skivington’s Gloucester.

Being wholly honest, I wasn’t overly sure what to expect coming into this game.

Gloucester picked up just their second win in the Premiership last weekend, with their other victory coming against today's opponents back in the depths of winter.

Like Gloucester, Wasps have been a mixed bag in terms of their results, last year's runners-up just lacking something at times to take them over the line.

It was very much a case of that today for Lee Blackett’s team. In the opening minutes, it was Gloucester in the ascendancy and dictating play.

This was hugely to the credit of England scrum-half Willi Heinz, the 34-year-old's influence allowing George Barton time to breathe and play his best game possible on his first Premiership start.

Having now seen three red cards in the past three rounds of action, Ollie Thorley’s dismissal for a head-on-head collision with Rob Miller was perhaps the most contentious.

Without a broadcast available to me in the press box, I initially thought it was Miller whose head was on the chopping block. In fact, I thought that all the way until the stadium announcer revealed it was Thorley who was at fault.

However, little can be done contemplating decisions out of one’s hands and you have to give huge credit to Gloucester for digging deep whilst a man down to get a victory.

The final score line truly reflects how tight the game was. Penalties were shed in succession by either side and it was the events leading to Billy Twelvetrees' winning penalty that perhaps epitomised the grit in which this win was gained.

Having been told to ‘****ing shut up’ by Ed Slater earlier in the game after shouting from the touchline, Jamal Ford-Robinson’s scrummaging to gain the penalty was monumental. He quite simply pulverised Nicky Thomas to get his team over the line.

It was a game that kept you guessing right to the very end. Sometimes that is all you can ask for.