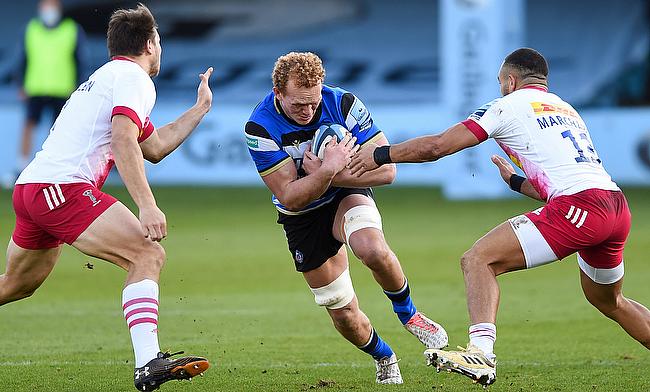 Miles Reid has continue his progression in the Blue, Black and White of Bath this season
©Onside Images

“My Sunday’s usually consist of literally just sitting on the sofa and watching the race and watching all the practice sessions! My girlfriend gets pretty angry when I spend the whole weekend trying to watch it all!”

Miles Reid is excited for the month ahead. Amid a global pandemic, sport has been a source of comfort for so many people and the 22-year-old is no different.

Our Zoom call overlaps with Aston Martin’s car launch for the 2021 Formula 1 season and the back-row’s enthusiasm for the new campaign - which begins at the end of March - is evident.

For a local talent like Reid, it is also unsurprising to see his support for the homegrown names in F1. A string of tweets towards the end of the 2020 campaign paying homage to world champion Lewis Hamilton and rising star George Russell clearly show where his loyalties lie.

Whilst Reid cannot wait to see his favourite drivers return to the circuit and tackle the twists and turns of Bahrain in three weeks’ time, in terms of the day job, Bath look to have turned a corner of their own.

It is fair to say Stuart Hooper’s men were very much a side at the back of the Gallagher Premiership grid throughout January. Defeats to Leicester Tigers and Wasps were far from ideal, but a heavy and chastening loss against near neighbours Bristol Bears could have seriously punctured the belief amongst the ranks at Farleigh House.

But despite Covid-19 disruptions and off-field matters to contend with, Bath are now very much back in the race for a top-four spot following three impressive victories over Sale Sharks, Gloucester and Northampton Saints, respectively.

“I think when we look back at that Bristol game [48-3 loss] and the few games before that, it was tough,” Reid exclusively tells TRU. “I feel like we strayed away from our identity and what made us a good team last season. Definitely now, we are on the right track.

“We have looked a lot better in attack. Equally, our defence has been a lot better and we are connecting better so those games that we had against Bristol where we were conceding a lot of points, that is not us. That wasn’t how we wanted to play the game so I think we took a hard look at ourselves.

“There are always going to be things in a season which knock you off, especially at the moment with Covid. For us as a player group, we are massively tight. Pulling together is a real strength of ours. All the challenges that we’ve had are just going to make us stronger as a team.”

Across all of their recent victories, Hooper’s charges have had to dig deep to come away with the desired result. The tone for this purple patch of form was arguably set by Reid and his fellow teammates during their 27-22 win away at Sale, with the back-rower constantly putting his body on the line for the cause.

Along with hooker Tom Dunn, the flanker epitomised Bath’s defensive effort at the AJ Bell Stadium as both made a combined total of 65 tackles to help secure the club’s first victory for just over two months.

“It was just the nature of the game [against Sale] which let me and Dunny [Tom Dunn] have those tackles!” says Reid, who has made the third-most tackles in the Premiership this season. “My body felt that after, definitely! When your defence is kind of slipping and not up to the standards, you look back to the simple things in the tackle. We needed to grow in that area and I think we have done that.

“You saw that Sale game. There was a period in that where we were defending for over five straight minutes and we eventually got the penalty for the turnover so we are definitely improving.”

Considering the emphasis they have placed on their defence over the last month, Bath would have been bitterly disappointed with their first-half showing at Franklin’s Gardens. At one stage, the visitors were trailing 19-3 to the Saints, but Zach Mercer's try gave Hooper’s side a lifeline going into half-time.

Reid and the aforementioned Mercer [who is moving to Montpellier at the end of the season] helped Bath complete a remarkable fightback last Sunday and the duo are part of an increasingly competitive back-row.

“I get asked this question a lot!” Reid laughs. “I think Zach will be missed next year. Obviously, he is going over to France and it is a big opportunity for him there, but he has been brilliant for us.

“Obviously, we have got a class set of back-rows at the club. When I came to the club when I was 18, I was learning off people like Toby [Faletau] and Sam [Underhill], feeding off them, watching what they do and asking them questions. It was all about thinking how I can add to my game. Slowly over time, I am now finding the player that I want to be myself.

“I am not going to look at Sam and think I need to do everything exactly the same as he does because he is different from me. Together, I think the balance of the back-row is really important so if everyone there is doing the same thing, you are going to miss something somewhere else. I think that is the balance that we have found over the last couple of weeks.”

Since signing his first professional contract with Bath in 2019, Reid, as he alludes to, has moulded himself into his own player, but his journey to the top-flight did follow a similar route to back-row compatriot Josh Bayliss.

The duo both represented the University of Bath in BUCS Super Rugby and the flourishing partnership between the institution and the Premiership club is something which Reid holds in high regard.

“Me and Josh playing together, obviously we came through the academy and played university rugby which is really special,” Reid adds.

“When you first join a club out of school, the leap is massive. It is huge and you can’t just step into first-team rugby straight away unless you’re a freak! I think it is important to have that outlet to go and play and go and learn. I think as well, having the university there is where life lessons are learnt. I have got mates there that I am going to be friends with forever which is as special as the whole experience.

“My time there was really good playing in the BUCS league. A few other people like Arthur Cordwell, Kieran Verden, Will Butt, all kind of came through there as well and now they are putting their hands up to push into the team. We have seen at the moment that not many young lads are getting game time because of Covid so when it gets restarted again, university rugby is really important for the development of young lads.”

Reid also took satisfaction from playing alongside academy products Ethan Staddon and Ewan Richards in last weekend’s 23-22 win over Northampton as Director of Rugby Stuart Hooper continues to show his faith in the next generation at Bath.

For this weekend’s clash with Exeter Chiefs, Reid has been rotated as Bath welcome back Sam Underhill, who has recovered from a hip problem.

Faletau also returns from Wales duty to line-up against the champions, who travel to the Rec following back-to-back losses against Northampton and Sale.

?? Team News@ObanoB and @taulupe return from international duty to start for Bath Rugby against @ExeterChiefs.

Sam Underhill and @GlanvilleTom are also back for the Blue, Black and White. #WeAreBath ??????

Bath have experienced some humbling defeats at the hands of the Chiefs in recent times, including a 40-3 thrashing back in November, but with confidence high amongst the squad, Reid is hoping the Blue, Black and White can maintain their momentum.

“The victories are a great foundation to build the rest of the season upon. The start of that Northampton game last week wasn’t perfect by any means at all, but the work that we did in the second half to come back and keep applying pressure was incredible.

“We came through the game and I think Rhys Priestland said it after the game, that is one of the best wins he has ever been involved with and I think that is similar for me. The character that we showed to come back in that fashion was amazing and it just shows the spirit and determination from all the boys at the club to do that. Now we are looking forward to the challenge of Exeter.”

Ahead of Round 12’s fixtures, Bath may sit 10th in the table, but they find themselves just eight points off the top four.

After experiencing the Premiership semi-finals for the first time since 2015 last term, Reid and his teammates will be keen for their resurgence to continue as they aim to be in a play-off position when the chequered flag comes down on this current season.