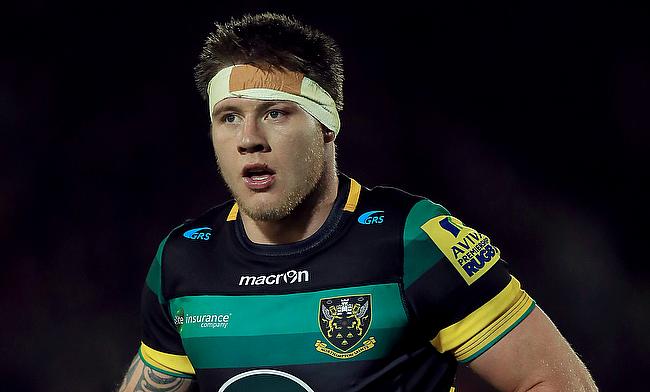 Teimana Harrison was the only try-scorer for Northampton
©PA

Northampton Saints managed to hold off Sale Sharks as they sealed a thrilling 17-14 win in the 13th round of the Gallagher Premiership at Franklin's Gardens.

This is seventh win for Northampton in 13 games as they move to fifth place with 35 points while Sale are at fourth despite the defeat with 37 points.

Northampton started the game with a setback as Ollie Sleightholme was sin-binned by referee Matthew Carley in the 10th minute following repeated infringements and the Sharks immediately set up a rolling maul only to be averted by brilliant defence from the home side.

After successfully denying Sale Sharks a point despite being down to 14-men, the Saints turned the table after James Grayson kicked inside the 22 allowing Tommy Freeman to burst through and eventually Teimana Harrison went over the line for the opening try. Grayson missed the conversion but kicked a penalty goal in the 32nd minute as the opening half ended with a 8-0 lead for the Saints.

Sale started the second half with intent as Jono Ross setting the pace into the 22m line but Tom Wood held up Akker van der Merwe in a maul and it was eventually cleared by Grayson, who also slotted another penalty in the 46th minute to take Saints to a 11-0 lead.

Northampton skipper Lewis Ludlam was forced off the field in the 50th minute following a head knock and another scrum infringement from Sale allowed Grayson to slot a three-pointer making the scoreline 14-0 by the 55th minute.

Sale Sharks finally applied pressure on the hosts and it came through a driving maul from a lineout as Jean-Luc du Preez dotted down and AJ MacGinty improved making it 14-7. Grayson restored 10 point lead for the Saints with a penalty after van der Merwe was penalised for a dangerous tackle.

With all to play for in the final quarter, Sale brought themselves back into the game when Lood de Jager dotted down off a rolling maul and MacGinty improved but could not find any more breakthrough as the Saints sealed a three-point victory.