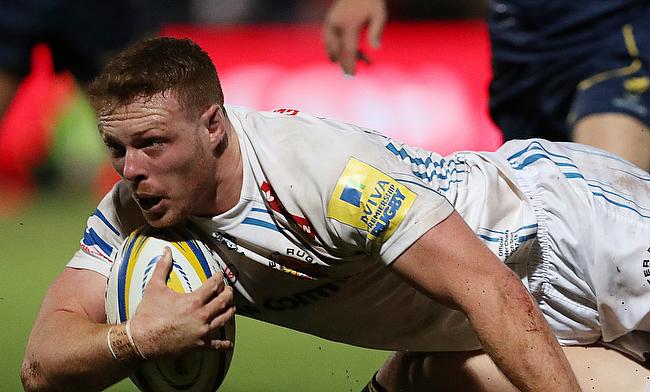 Sam Simmonds created a new Premiership record for most tries scored in a season as Exeter Chiefs trounced London Irish 31-12 in the 19th round at Community Stadium.

The win has taken Exeter back to second position with 68 points as they clinch a play-off spot while London Irish are at seventh place with 43 points.

Simmonds, who scored a hat-trick in the game now has 19 tries in the season beating the previous record held by Christian Wade and Dominic Chapman, who scored 17 in the 2016/17 and 1997/98 seasons respectively. The game also saw 4,000 fans visiting the stadium for the second time at Community Stadium since the relaxation in Covid-19 rules.

Both the teams were desperate for early breakthrough which came in the 7th minute when Sam dived from close range and was handed to the visitors following a consultation from TMO and his brother Joe converted. The try also Sam level Wade and Chapman's reocrd.

The Exiles' response came in the 12th minute when Albert Tuisue and Ben Donnell combined with the latter eventually going over the line and Paddy Jackson's conversion ensured the scores were levelled.

Rob Baxter's men seized the lead back at the end of the first quarter with Tom O’Flaherty helping them reclaim the possession and skipper Joe breached the defence in London Irish as he went past Lovejoy Chawatama to dot down. He missed the conversion but ensured the extras was kicked in the 25th minute when Sam scored the record-breaking try after good work from Sean Lonsdale and Luke Cowan-Dickie making the scoreline 7-19.

The Exiles narrowed down the gap around the half-hour mark when Jackson's cross-field kick found Ollie Hassell-Collins, who in turn sent Ben Loader over as the teams completed the opening half with a 12-19 scoreline.

The visitors extended their lead further early in the second half when O'Flaherty dived over the line in the 49th minute but six minutes later the Exeter winger was sin-binned for taking Tom Parton out in the air.

Despite having the numerical advantage, London Irish could not find any breakthrough to narrow down the 12-point gap and as Exeter returned to full strength they scored their fifth try and once again it was Sam, who completed his hat-trick to make it 12-31.

In the 79th minute, Exeter thought they extended their winning margin further when O’Flaherty went over but was turned down following a consultation with TMO. Nevertheless, it did not matter as Exeter reclaimed their second position in the table.