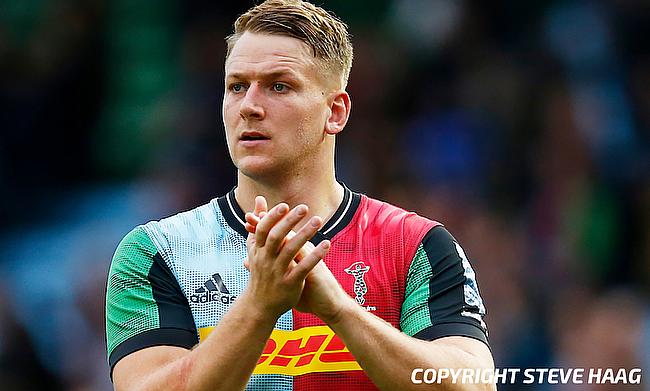 Harlequins have booked a berth in the play-offs of the Gallagher Premiership after edging out Gloucester 28-24 in the latest round at Twickenham Stadium on Saturday.

Harlequins have consolidated their third position in the table with 79 points - nine more than fourth placed Northampton - while Gloucester are at fifth position with 68 points.

Ben Morgan started the proceedings early for Gloucester following a well worked maul in the 11th minute and Adam Hastings kicked the conversion to make it 0-7 but Harlequins responded back strongly in the 16th minute as Alex Dombrandt touched down after Danny Care provided the break. Marcus Smith also was spot on with the conversion.

The end of the opening quarter saw Freddie Clarke showed brisk pace to touchdown and Chris Harris followed the suit with their third try in the 30th minute. Hastings kicked both the conversions and followed with a drop goal in the 34th minute as they Cherry and Whites raced to a 7-24 lead at the end of the opening half.

The home side showed better intent in the third quarter as Joe Marchant scored twice in the 48th and 59th minutes and Smith got both the conversions to perfection to bring the gap down to three points.

Harlequins' momentum got further boost as Louis Rees-Zammit was sin-binned for deliberately slapping the ball down in the 64th minute and four minutes later Cadan Murley scored in the corner to secure the bonus point victory that has confirmed their play-off berth.