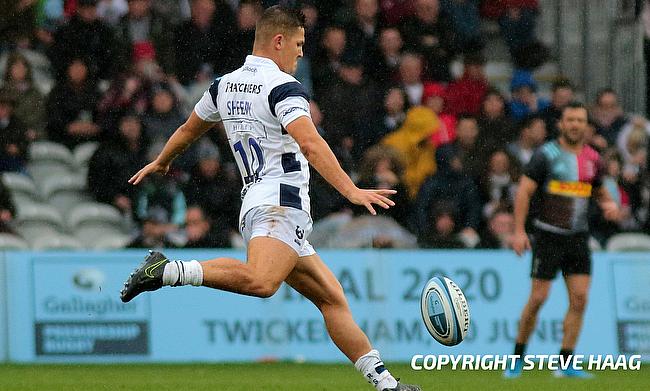 Exeter Chiefs' hopes of making to the play-off took a major blow as they were defeated by Bristol Bears with a 33-40 margin in the 25th round of the Gallagher Premiership at Ashton Gate on Friday.

Exeter now have 64 points from 23 games as they slipped to the seventh place in the table with Sale Sharks, Northampton Saints and Gloucester Rugby among top contenders for the fourth spot. If they fail to make it to the play-off, it will be a setback for Rob Baxter's men, who have reached every final since 2016.

Meanwhile, Bristol are at 10th place following their eighth victory from 23 games.

Exeter pressed the attack early but a knock on from Henry Slade prevented a score from Stuart Hogg. The Chiefs continued to press on but a stern defence from Bristol ensured they remained scoreless.

The home side got the initial breakthrough at the start of the second quarter after Exeter captain Jack Yeandle had infringed allowing Bristol to a win maul penalty following which Harry Randall sent an inside pass for Callum Sheedy to touchdown. The fly-half also kicked the conversion to make it 7-0.

The scores were levelled three minutes later after Santiago Grondona burrowed over and Joe Simmonds followed with the conversion. As the break was nearing, Charles Piutau and Josh Hodge exchanged tries as the teams were unseparated at 14-14 at the completion of the opening half.

Bristol dominated the opening exchanges of the second half as Piutau completed his second after the Bears had pulled in the Chiefs defence from a tap penalty and in the 51st minute they claimed the bonus point as Alapati Leiua dotted down following a flat pass from Sheedy as they increased the lead to 28-14.

The 53rd minute saw Bristol reduced to 14 players temporarily with Jack Bates sin-binned and Exeter made use of the numerical advantage as James Kenny and Olly Woodburn scored in quick succession in the 54th and 58th minutes respectively as the scores were once again levelled at 28-28 with the third quarter coming to an end.

Bristol made use of a mistake from Exeter as Slade’s intended pass to the right was plucked out of the night sky by Fricker, who burrowed over and their lead extended further in the 74th minute as a well executed move from the hosts set Luke Morahan over to make it 40-28. Dave Ewers scored a consolation try for Exeter in the final minute but that did not stop them from losing the encounter by seven points.