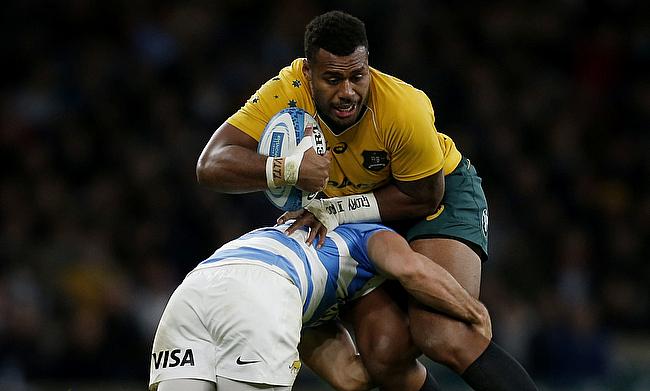 Samu Kerevi was one of the try-scorer for Australia
©PA

Andrew Kellaway scored a hat-trick as Australia finished the Rugby Championship on a high with a 32-17 win at Cbus Super Stadium on Saturday.

This was fourth win for the Wallabies in six games as they sealed the second place with 18 points while Argentina finish the tournament winless.

The Pumas had six players unavailable as they breached the health orders in place due to Covid-19 ahead of the encounter and were banned from rejoining the squad.

Both the teams were desperate for the opening points as Emiliano Boffelli and Quade Cooper missed their penalties before the veteran Wallabies playmaker got his kick right in the 10th minute to make it 0-3.

The 27th minute saw Reece Hoge kicking the ball to touch and from the resulting line out Folau Fainga'a dived over.

Cooper missed the conversion but ensured he improved their second try that came in the 24th minute with Fainga’a and Rob Valetini combined to send Kellaway over the line making it 0-15 before Boffelli got the home side off the mark with a penalty goal just at the stroke of half-time.

It took Australia just three minutes to get off the block in the second half with Samu Kerevi dotting down at the back of a well timed pass from Cooper making it 3-20.

Australia stamped their authority in the game with Kellaway scoring his second in the 54th minute as he brushed away a tackle from Santiago Chocobares and four minutes later Len Ikitau went past a couple of Pumas defenders to help Kellaway complete his hat-trick taking Dave Rennie's side to 32 points.

Even though Thomas Gallo provide some consolation for Argentina with back to back touchdowns in the 63rd and 72nd minutes, it did not matter much as Australia completed a double over Mario Ledesma's men this year.