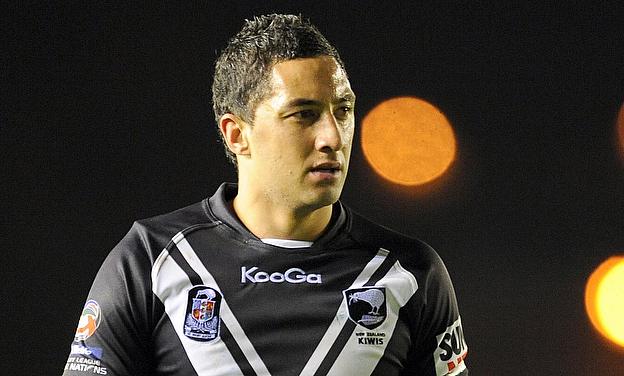 Former New Zealand Rugby League captain Benji Marshall is clear to return to rugby league after being freed from his contract with the Auckland-based Blues.

Marshall has struggled to make an impact since leaving NRL side Wests Tigers and switching codes .

The 29-year-old asked Super Rugby side Blues to release him at the start of the week and was formally granted his request on Wednesday.

The Blues announced in a statement: " New Zealand Rugby and the Blues have today agreed and confirmed the terms of Benji Marshall's release from his Investec Super Rugby contract.

"Following Friday night's match against the Hurricanes, Blues head coach Sir John Kirwan and Benji Marshall had some frank and honest discussions and mutually agreed the best path forward was for Marshall to return to rugby league."

Marshall said: "I gave rugby (union) a go and it didn't work out. However I feel like through being at the Blues I was able to find myself again, find some hunger, get fit and on top of that and more importantly I feel like I've become a better person.

"On the field I certainly wanted to achieve more than how it panned out. It didn't go that way but in terms of life it did 100 per cent. The Blues gave me the opportunity to be myself and express myself and I feel like I'm leaving as a better player and a better person for it."

Salford's ambitious owner Marwan Koukash has spoken of his desire to bring Marshall to Super League but the Red Devils currently have no room on the salary cap and Marshall has made it clear that he wants to return to the NRL, instructing his manager Martin Tauber to begin talks with potential suitors.

Wests Tigers have ruled out making a play for their former player.

A mercurial playmaker, Marshall played 11 seasons and 201 matches for the Tigers after joining them as a schoolboy in 2003 and won a Premiership there in 2005.

Marshall, who was a member of the Kiwis team that won the World Cup in 2008, left the NRL at the end of last season, saying he had achieved all he could in the game and was keen for a new challenge.

Kirwan said on the team's website: "I sat down with Benji and said I wouldn't be able to pick him in the 23 this week and felt that he needed to take a step backwards to come forwards, playing some club rugby and for the Blues development team to work on his game.

"I asked him honestly if he felt rugby (union) was the game for him and his response was that he felt like a league player playing rugby union and that things weren't happening as fast as he would have liked so we both decided it was probably best for him to return to playing league."