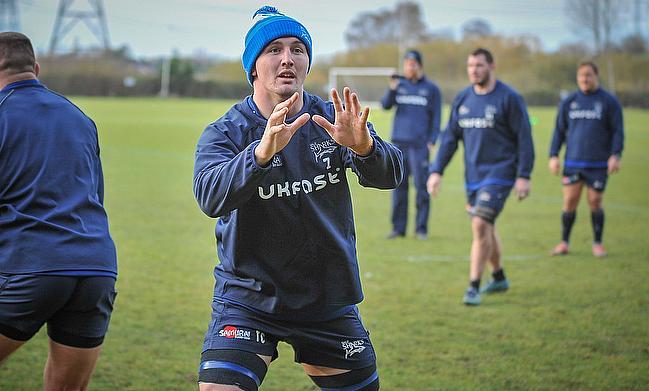 “Don’t just ask me: ‘How was Japan?!” says Tom Curry jokily as he sits down at Carrington following England’s World Cup journey.

He is aware his time in the Land of the Rising Sun and the 32-12 final defeat to South Africa will be mentioned during the interview, but for the 21-year-old, one of the most memorable experiences of his short, but flourishing career, just has to be highlighted.

Curry seamlessly slotted back into Steve Diamond’s side last weekend and produced a Man of the Match display in Sale’s 25-10 victory over La Rochelle at the AJ Bell Stadium and it was a performance which is becoming a regularity for the talented back-rower.

Alongside his brother Ben, the Curry’s are two of many shining lights at Sale and for Tom, 2019 has been a year he will never forget despite not wanting to dig up the heartbreak against the Springboks too often.

Find out more about the remarkable rise of @TomCurry98, from schoolboy prodigy to England flanker in the space of just four years: https://t.co/nUnbcoO1HZ#RWC2019 #CarryThemHome pic.twitter.com/x2MLXyYwbK

“It is one of those things you can’t really reflect on too much,” he says. “In all honesty, I don’t really want to reflect on it. I have some unbelievable memories, but it wasn’t meant to be.

“It is a long story short, but you have to look at the memories which will last you a lifetime, not just for yourself, but for your friends, family and fans. That’s that. You would be doing Sale a disservice if you were hanging on to any baggage!”

You could maybe forgive Curry if he was slightly laboured last weekend following his exertions in Japan, but as ever, he produced a brilliant individual display on his immediate return to club action. It was a testament to his mentality and talent, with both attributes continually being showcased during his rapid rise through the Sale ranks.

Three years ago, the Curry brothers were part of the system at Sale FC. The team were in National Two North when the duo burst on to the scene and since moving on from Heywood Road, Sale Sharks’ link with the National League outfit has continued to grow.

“You have to stop yourself along these journeys otherwise it can pass you by pretty quickly,” he added. “It sounds clichéd, but it only felt like yesterday that we were playing at Heywood Road.

“Things like the World Rugby award nominations and Rugby World Cup finals, you have to stop and appreciate these moments otherwise you’re never going to be happy.

“It has been pretty incredible but you have to learn from it and move forward to get better. I want to push on and day by day I don’t think anything changes for me attitude-wise.”

Curry did begin his rugby journey at Crewe and Nantwich before being spotted by Sale and the Gallagher Premiership outfit can clearly see the benefits of National League rugby the influence it can have on the development of young players.

Time for some more positive talk surrounding the National Leagues?

Last year, Steve Diamond spoke glowingly about the divisions lower down the rugby pyramid and this week, we saw the likes of Tom Roebuck, Raffie Quirke and Connor Doherty named in England U20s 45-man training squad next year’s Six Nations after developing well for Sale as well as spending some time out on loan at clubs such as Fylde, Preston Grasshoppers and of course, Sale FC.

“Sale is an unbelievable club as we have so many youngsters coming through, very good youngsters that I don’t think for the past five or 10 years, we haven’t had or kept,” Curry said.

“It is a big stepping stone to learn men’s rugby and just to be a good human being. Playing at that sort of level there are times when it might be a bit aggressive and uncomfortable so you do learn a lot about yourself at those standards. Ben and I were the only two in our year to go full-time and then seeing first-year pros now and how many of them there are is great.

“When you’re playing against the young lads, you can’t be running at someone who is a turnstile you need to be running against good opposition. We all get better if they push us.”

There will be no standing still for Curry or Sale as club. Tom, along with, Ben have been pioneers for the Sharks’ promotion of youth and development with the Sam and Luke James also standing out as examples.

Despite all the influx of star talent from abroad, there is still a sense Sale invest heavily in the development of home-grown players and for the future, that has to be promising. “It is a credit to them, a credit to Sale and the academy and Dimes for giving them the opportunity,” concluded Curry.