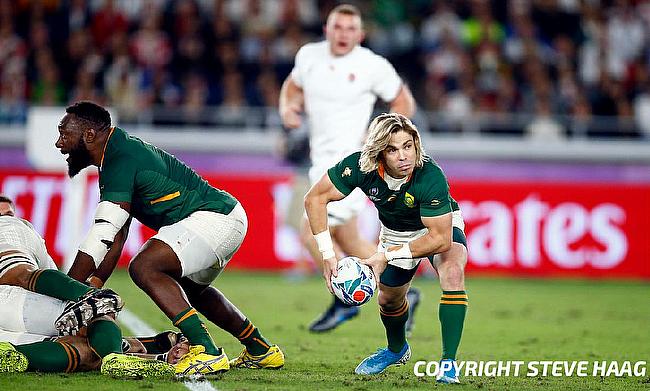 On a dreary November afternoon in Greater Manchester, as the last knockings of autumn are replaced by winter, the assembled media gather in Carrington at Sale Sharks’ training base.

Whilst we wait in the small press room and talk amongst ourselves, the door bursts open. “Am I in here?!”

Stood there in a combination of a bobble hat, jumper, shorts and flip-flops is Faf de Klerk, but you could forgive him for asking whether he was supposed to be joining us or not following a whirlwind few weeks for the scrum-half.

At the start of the month, De Klerk was one of South Africa’s key components as the Springboks lifted the Rugby World Cup for the first time in 12 years.

What De Klerk achieved in Japan was, of course, another historical rugby moment for his native country, however, just like in 1995 when South Africa defeated New Zealand at Ellis Park, winning the Webb Ellis Trophy seemed to signify so much more than just the title of ‘World Champions’.

Many thanks to @stranners for his time the other day. A man that knows a thing or two about winning tournaments, Joe told me how a World Cup win could unite a nation once more.

In the lead up to the final against England, the news stories surrounding the troubles and discontent in South Africa became more frequent. TRU’s Joe Harvey spoke to former Springbok Joel Stransky, who kicked the winning points against the All Blacks 24 years ago, and he admitted a third world title for his nation could bring a fractured country together.

For De Klerk, the reception he and Rassie Erasmus’ side experienced on their return to South Africa emphasised the immense influence rugby can have on a population.

“I can’t really describe it,” De Klerk says. “It was absolutely amazing. We knew we had support in Japan from the South African people but once we got off the airplane and got back, it was amazing.

“The airport was filled with people and every time we visited a different part of the country, more and more people showed up. It felt like every single person in South Africa was there.

“Seeing people with all type of races coming together, giving each other hugs and you could just see tears in so many people’s eyes and what it meant to them, that sticks out for me. The children screaming out the guys’ names, people who probably don’t even have televisions to watch the games, but they managed to watch us and find a way around it. What it meant to them will always stick with me forever.

“It was amazing to be a part of that and to see what it means to them. It means a lot to us players to see the support we got and hopefully it did some good for the country.”

It has been quite the revival for De Klerk and the Springboks. At the beginning of last year, the scum-half was out of favour with the national side under the stewardship of Allister Coetzee but his impressive performances for Sale saw him return to the reckoning for South Africa’s successful summer series against England in 2018.

At that point, Erasmus had taken over the reins and the head coach had also named Siya Kolisi as their new skipper; the first ever black captain to lead the Springboks. Seventeen months later. and with a first Rugby Championship title since 2009 also in the trophy cabinet, they were holding aloft the biggest prize in the sport and De Klerk, who has rapidly become one of the stars of the world game, hopes South Africa can use their remarkable resurgence in a positive way.

“We were under a lot of pressure two years ago because we were not performing up to standards,” De Klerk says. “We wanted to change that perception of the Springboks.

“A lot of people said it was similar to the 1995 World Cup, but in a sense, it is almost bigger for what it means to the people. To be part of that side is absolutely amazing with some great people. What Siya means, coming from very humble beginnings to where he is now, just gives a lot of hope to a lot of youngsters that they can come from poverty and still make it. That’s special and just to inspire the people is the main thing.”

“Hopefully we got the right people in the right spaces be it political, be it our coaches, be it RSA Rugby Union. I feel we are in a really good spot in terms of that and hopefully they can really crack things up and do things better. What to do better, I’m not sure, but I know they are working on it and we got a promise on it that they will do better for the people and the country and for the youngsters coming through.”

De Klerk will be keen to continue playing an important role for his country on and off the field, but his immediate future seems him back at Sale as he resumes club duties this weekend.

The scum-half admits he has been “noticed” a little more in the UK since his World Cup success and De Klerk will be in the spotlight again as Steve Diamond has named him in his starting XV for Sale’s Heineken Champions Cup clash with La Rochelle.

On his arrival back at Carrington, De Klerk admitted he hung his winners medal around Tom Curry and Diamond has also selected England’s standout performer in Japan for Sunday’s fixture.

Asked whether he had to separate the two World Cup finalists on their return, Diamond jokily said: “It was bit of banter there, but Faf would win it anyhow!”

It is clear De Klerk and Diamond’s relationship has benefitted every party involved since the South African made the decision to move to Sale from the Lions in 2017. Now, De Klerk is one of the faces of South African rugby and Diamond cannot underestimate the influence his scrum-half can have for Sale as well as the landscape of rugby in the north-west.

Diamond added: “He’s a very popular guy with the sponsors and with the crowd because of the exciting style he plays! That has driven the crowds up so that is something he can hopefully build on.

“He was out of the South Africa squad and now he is back in the squad so the gamble to move here paid off! We knew what his abilities were. His ball in hand is phenomenal and defensively he is very good. He just needed to play regularly and get some confidence and he got that within the first six months.”

Sale and Diamond will be hoping De Klerk can fit into his chief orchestrating role with minimal fuss this weekend as the Sharks aim to bounce back. They begun their European campaign with a 13-7 defeat away to Glasgow Warriors and Diamond believes this Sunday’s fixture will be crucial against La Rochelle, who themselves were brushed aside by Exeter on matchday one.

“I think this week is a make or break result for us because if we lose, we’re probably out of the group,” Diamond said. We’re at full strength as we can be and if we get it right then we’ll win. Then it puts us in a good position in the group because as we know, three runners-up go through. It would go to the Exeter weekend in a fortnight’s time to decide how that goes so it’s all to play for this weekend.

“We were highly competitive [when Sale faced La Rochelle in last year’s Challenge Cup semi-final]. We just got overpowered a little bit. I think we can match that this year.

“They don’t play with any structure by the looks of things. They do move a lot of ball so we have just got to be alert. We played Glasgow last week, who are similar in the way they play and, effectively the difference between the two teams was one missed tackle. If we can stay concentrated and if our set-piece can operate which it hasn’t done all year, then I think we stand a chance of winning.”