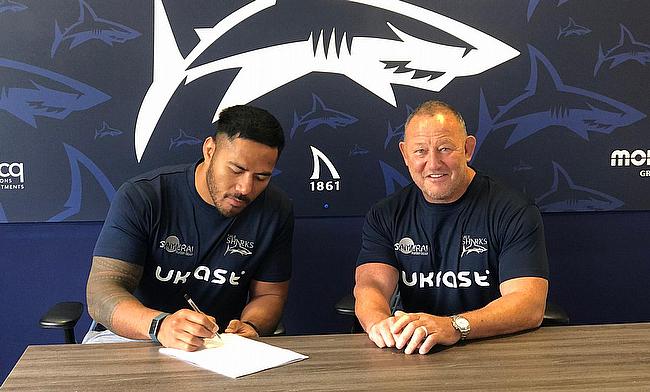 Sale Sharks have announced the signing of England centre Manu Tuilagi until the end of the 2020/21 Gallagher Premiership season.

Last week, Tuilagi was released by Leicester after he failed to agree to a revised deal with the East Midlands club.

The Tigers confirmed on Friday that Tuilagi’s 11-year stay at Welford Road had come to an end, which sparked further discussions around the centre’s next move.

On Saturday, the Daily Telegraph reported Sale Sharks were in a position to make an approach for Tuilagi because he had become a free agent and the club have since made an official announcement.

It is understood that Tuilagi was extremely keen to stay in England in order to remain available for international selection and Sale have now obtained the 29-year-old’s signature.

Tuilagi’s move to the AJ Bell will clearly excite Sharks supporters who, once again, are welcoming another star of the game to Manchester.

For the player himself, he will still be in Eddie Jones’ plans moving forward and Tuilagi will also be hoping to be a British and Irish Lions starter next summer in South Africa.

Sale, now with Tuilagi at their disposal, will resume their Premiership campaign against Harlequins on August 14th as the second-placed side look to maintain their title aspirations.

"Manu will be a fantastic commercial and playing addition to our squad," said boss Steve Diamond.

"After discussions on Friday, all parties - Leicester Tigers, Manu Tuilagi and Sale Sharks - agreed that the player was a free agent and was able to enter into negotiations with another club."