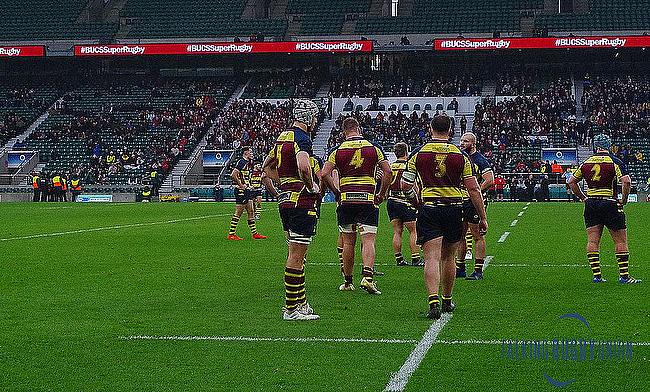 Cardiff Met reached the Twickenham final back in April
©TRU

Luke Northmore believes Cardiff Met have a lot more to offer as he sets his sights on helping Danny Milton’s side maintain their strong start to the season.

Met currently sit fifth in the BUCS Super Rugby table and after suffering back to back defeats, the Welsh university returned to winning ways last week against Leeds Beckett.

Northmore, who scored Met’s decisive try in Round Six, told TRU: “I think there was a bit of relief after last week’s win!

“It was a difficult game, but we worked hard to make sure we got the result and now we want to move forward. It was great to get the result especially after losing two games in a row, but we know we can still get better.”

With Round 7 fast approaching, catch the best moments from Round 6 of #BUCSSuperRugby! ?? pic.twitter.com/5KohBPceve

The centre has been an integral part of Cardiff Met’s rise over the last 14 months, with the Welsh institution reaching the BUCS Super Rugby Championship final at Twickenham in the 2017/18 season.

Once again, the standard has risen in BUCS Super Rugby this term and Northmore admits the challenge to be successful in this campaign is even greater.

“If you look at some of the games that have been played this year, you can see how competitive it is,” Northmore said.

“When we looked at the table, we only saw we were five points off the top so it really shows how tight this league already is.

“We performed really well last year and we know we need to keep improving because of the strength of the league.”

As the quality increases in BUCS Super Rugby, the league is becoming more of a viable option for young players who want to take their next steps in the game.

Cardiff Met have seen the benefits of BUCS Super Rugby and their rugby programme over the last couple of years with the likes of Alex Dombrandt, Max Llewellyn, Ben Williams and George Simpson using Met as a platform to pursue a career in the sport.

“It is great to be able to balance your studies with a high level of rugby,” added the England Student representative. “Rugby does not go on forever so you do need something to have if you don’t make it in the game.

“For some players who don’t go through the academy system, BUCS Super Rugby and Cardiff Met really do offer a pathway for people who want to carry on playing and it seems like that will only get better.”

Met will be aiming to continue improving on the field when they take on Durham University this Wednesday, with the North-East outfit also beginning the season in a positive fashion.

Alex Keay’s side are one place and two points above Met ahead of their clash in South Wales, with Durham coming into this encounter off the back of an excellent 32-19 win over Loughborough University.

Both teams have the chance to go to the summit of BUCS Super Rugby, but Northmore revealed Met have to take each game as it comes.

He added: “We don’t want to put more pressure on ourselves. Yes, we do have bigger aims, but we have got to focus on what is directly in front of us and concentrate on that.

“Wednesday is a big game. Both teams are doing well and like I said before, with the league being so tight, another home win would be great for us.

“Playing at home does give us that confidence so hopefully we can put in a performance and keep building.”