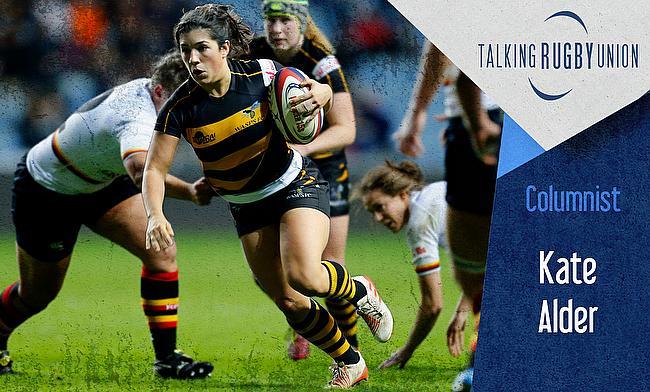 In her latest column for TRU, Wasps Ladies captain Kate Alder tells us about her Christmas and how she feels going into another break as the Six Nations begins.

If you’d told 16-year-old me (who was significantly softer round the edges…), that I’d be throwing on my trainers on Christmas day to run 5k all in the name of rugby – I’d have told you that you were mad! But sure enough, for the last three years Wasps Ladies players all over the globe lace up on Christmas day to complete a 5k fartlek programme.

For me, Christmas is a time where the current status of women’s rugby is most pronounced – an amateur set up with professional standards. The age old saying that “excellence is what you do when no-one is watching” couldn’t be more fitting, as while others indulge over the festive season, our break is defined by festive workouts and Christmas circuits.

However, as we are 5th in the league, after that painful loss to Gloucester, it had to be done. The way the league has been structured this year, in line with the Six Nations, we had two games after Christmas that we needed to win – DMP away and Bristol at home. With those boxes ticked, we head into our second big in-season break, not resuming until the 21st March, where we face Loughborough, followed by Harlequins, followed by Saracens. All away.

I’d be lying if I said going into another extended break from playing is easy. All rugby players know that pre-season is tough…but a mid season pre-season feels even tougher! Ultimately, you train hard to play well, and when you aren’t regularly competing, but training as hard, if not harder, it can be mentally pretty challenging.

Wasps FC Ladies are thrilled to announce that they have secured their place in the @Premier15s competition for the next three-year league!

Yet it does offer us a chance to improve. With us losing five players to English and Irish training squads, Wasps remain fairly constant, compared to the likes of Harlequins who lose 13 players to international duties. Giselle [Mather] creates a detailed training programme for how we can best utilise this break, and come back stronger, more skilful and ready to take on the top three teams.

With the first weekend of the Six Nations underway, it’s set to be a fiercely competitive tournament – with Tyrrells players standing out right across the board. Taking our very own for example; Abby Dow scoring for England, Cliodhna Moloney crossing the white wash for Ireland and Edel ‘Tricky’ McMahon picking up the Player of the Match award against Scotland.

But this success is just the tip of the iceberg. What most people don’t realise are the sacrifices and life choices that have gone before to make this happen. Players are giving up budding careers as Accountants or Bio-scientists or Managing Consultants to work part time roles, earning less money, but training most days.

While funding is rightfully going into the physical development of the game – coaching, S&C, nutrition and facilities, I wonder at what point there will be a focus on the mental wellbeing of these players living in this limbo. You’re taking competitive, high performing individuals and asking them to choose between performing in a career, or performing in sport – life defining decisions. Through my job, I often work closely with LAPS and the RPA, who are heavily focused on athlete’s wellbeing after sport, but I wonder when there will be a focus on athlete’s wellbeing during “amateur” sport.

So, the future is not necessarily straight forward, but the future is most definitely bright. With the recent announcement that Wasps Ladies FC have confirmed our place in the TP15s moving forward, I feel so proud of all the hard work, determination, competitiveness and commitment that has been shown by everyone to make this happen, and can't wait to see what we continue to achieve. I have a funny feeling that amateur set up with professional standards will be rapidly changing, and you never know - I might even miss the Christmas run.