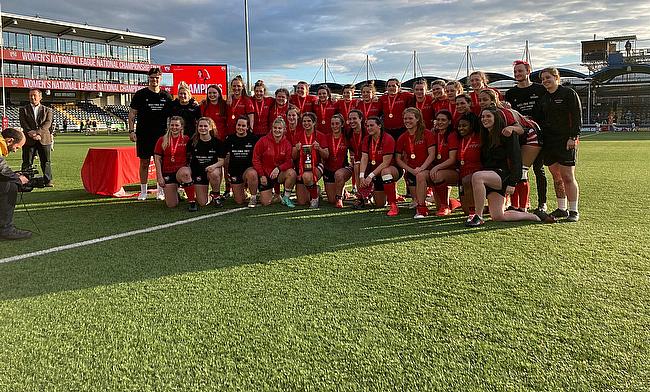 Near misses of years gone by cannot be in Exeter's thoughts as they target university rugby's biggest prize
Lewis Barrett Exclusive: The University of Nottingham flanker balancing BUCS with the Championship
Edinburgh University skipper Sarah Denholm and her squad out to emulate the 'Class of 2017'
Exclusive: Jo Yapp talks uni rugby and growing Worcester Warriors Women

Hartpury put their name on the BUCS Women’s National League National Championship title for the first time on Wednesday afternoon by beating the University of Edinburgh 22-36 at Sixways Stadium.

Lifting the trophy in front of a fairly sizable bit of support that had come from the West Country, it was a day to remember for Mo Hunt’s team, who certainly didn’t have it all their own way across the 80 minutes.

In the first half, nothing could separate either team. Edinburgh started the brightest, their internationals oozing quality, just as you’d expect, straight out of Scotland’s TikTok Women’s Six Nations camp.

It was one of those internationals that got the scoring underway, Meryl Smith dotting down from a crash ball within five meters, moments after Hartpury’s Jordan Russell stifled the centre who looked certain to score.

Russell was well worth the Player of the Match award, the bustling blindside not only brutal in defence, but linked up play in the midfield, as well as carrying hard needed in order to break the gain line.

She's the top points scorer in the Women's National League for a reason ??

Adding the conversion too, Edinburgh’s dominance carried on but to no avail. Hartpury withstood incursion after incursion into their 22m, their reward for withstanding those bombardments from white shirts a breakaway try for tighthead prop, Nadine Vincent, the prop scoring a phase after England international Emma Sing unable to find her way over the try line.

With the conversion missed, Hartpury still trailed the de facto home side. It took the individual skill of Lowri Davies to allow Mo Hunt’s team to take the lead for the first time, the wing handing off her opposite number and go over unopposed.

Holly McIntyre drew the scores level going into the break, the centre finding space on the right wing following a period of Edinburgh pressure down the middle.

The first half began much like the first, with Edinburgh taking the lead. Their try came through Smith, the centre leaving plenty of red shirts in her wake to power over under the posts.

Kicking the conversion after receiving some lengthy treatment, the centre’s next action would be to kick a penalty to take her team in the lead, the final points that Edinburgh would score on Wednesday afternoon.

It is @HartpuryRugby who are the queens of BUCS women's rugby with a 36-22 victory over @EULRFC ????

And just look at what it means! ?? pic.twitter.com/ZYSWktG5yE

Hartpury’s hooker, Amy Dale, scored a hat-trick of tries, the Southport-born front-row firstly crashing over from close range prior to benefitting from the hard work from the rest of her forward pack.

When Dale went over for a third time, the game was beyond all doubt, those that had made their way to support the team in red more of aware of that fact before bursting into delight when the final whistle was blown.

“I don’t think we threw many shots today if I am being honest,” Mo Hunt told TRU after the game.

“Maybe the occasion got the better of us in terms of the rugby we really aspire to play, but it is all about having that grit, having that heart and being warriors.

“Lynny [Sean Lynn, Hartpury’s Head of Women’s Rugby] always talks about being warriors, and that’s what we were today.”

At the end of a game in which Edinburgh were significant opposition to Hartpury, Hunt was also quick to praise Claire Cruikshank’s side.

“It is knockout rugby at the end of the day, you have got to want it; everyone wanted it on the pitch,” Hunt said.

“Full credit to Edinburgh, I thought they were outstanding today. What a spectacle for women’s rugby. That’s all we can ask for.

“You never want to be on that side of the result, so my heart goes out to them, but from the Hartpury perspective, so proud.”