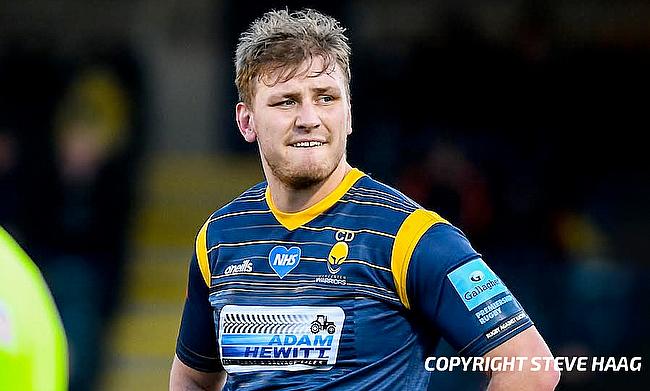 Plenty of people would have scoffed in September if you told them that Worcester Warriors and Bristol Bears would be level on points.

Fast forward to the New Year and that is very much the case, the team’s level on 21 points apiece heading into this second block of European competition.

Scoring a try in the club’s 22-19 loss at the hands of Bath on Sunday afternoon, Joe Batley speaks to TRU on his day off, some 48 hours removed from a date with Toulon in the Challenge Cup.

This season has already had its highs and lows, a win over London Irish opening the season up, but heavy losses to Exeter Chiefs, Leicester Tigers and Northampton Saints cast a shadow over October.

“We had a really rocky month where everything was capitulating around us a little bit,” Batley said. “But that was mainly our own fault.

“The desperation of trying not to make what was happening happen, kind of made everything worse. Boys started trying to fix things, going out of system. It wasn’t through a lack of trying, it was desperation.

“What we have tried to do is peel back a few of the layers and just work from the fundamentals of why we became rugby players to begin with. That has shown in the tries we have scored (since), some good skills and now it is about shoring up our defence.

“We have shown that we can score good tries, but we are leaking too many, so that has been the focus the last few weeks; what we can get right, getting confidence from that and letting our attack speak for itself.”

Before speaking to Batley, you get a vague idea of his character. He’s a personality, someone with a genuine story and he’s in the form of his life.

How the past has shaped the future

It is almost impossible to speak to Batley and not mention his battle with cancer. At the age of 21, the lock forward had a lump in his neck pointed out to him by a Bristol teammate, and in a matter of months chemotherapy had begun after a diagnosis for Hodgkin lymphoma was given.

A gruelling six months of treatment was prescribed to him, and a player well known for being a personality in the dressing room, had to put everything into his recovery before turning his attentions back to rugby.

“Before you knew it, I was back in training and then playing a few A-League games, and I was back to it,” Batley said. “I was really lucky, because we found it really early and I got onto the treatment quickly.

“It did wipe me out, it was horrible. There was a moment where I had a scan and they said it (the treatment) hadn’t worked. I got a phone call two hours later, saying there was something wrong with the scan and they thought I might have been moving.

“I had to go back in and get scanned again and found out it had, in fact, worked. I got to take a big breath when Covid happened, because there was nothing else for me to do. I was training by myself a couple of hours a day and for the rest of it I was twiddling my thumbs.

“That really gave me the opportunity to take stock of what I had gone through and what I had achieved. Because, as soon as the chemo was finished I said to myself I needed to play in the Prem, then I said I needed another contract and then play as many games as I could. Things kind of spiralled from there, and it took me the lockdown to take stock of everything.

“The worst moment was when I first found out, because my mum and dad didn’t know anything was wrong with me. I had to phone them up and break the news to them. That is going to stay with me forever.

“After chemo, I couldn’t really get out of bed, I was really weak, and normally being quite a big, strong person, to then struggle lifting my arms or get out of bed was tough to take mentally and emotionally.

“Bristol were amazing, the hospital was fantastic, I had people like Charlie (Beckett) who came to visit during chemo sessions to keep my spirits high and they all treated me the same. I didn’t want any special treatment, I wanted to still be Bats and not the guy who had cancer.

“I probably came back to rugby a bit quick, just through keenness, and I probably wasn’t showing my best side for the first six months. I was far too unfit and really not strong enough. When that (fitness) came back, playing became more frequent, which was good because people took a chance on me, and I hope I am repaying them now.”

Approaching the four-year mark since his diagnosis, the world is much different for Batley. Not only is he now a homeowner; last year, the 25-year-old became a father for the first time, his partner, Anna, giving birth to a son, Wilfred, just over four months ago.

Such was the publicity of the 25-year-old’s story, it has now even led to people reaching out for him for advice following their own diagnosis or the diagnosis of a loved one, something Batley says has given him a different perspective of social media, when plenty of others see it as a breeding ground for negativity.

“When I got diagnosed with Hodgkin lymphoma, I had never heard of it at all,” he said. “As soon as I got told, I got a few messages, saying ‘my dad had this’ or ‘my brother had that’ and then it started seeming like less of an alien thing.

“So, when people ask me about it, I am more than happy to speak openly and talk about it. I have had three other rugby players message me saying they have had it. Others that I didn’t know and had come across my story have got a hold of me.

“There’s a lad in Ireland going through it at the moment and we have been exchanging stories. Because, as soon as you know someone who has been through it, it makes it a lot more digestible, because you can compare and contrast; some of the side effects he has had, that I didn’t, that I did and he didn’t and then then crossovers.

“I have never met him before, and I would love to. If I go over to Dublin, then 100% I will try to meet up with him and I am sure if he ever ventured to Worcester he will try and do the same. It is has been nice that in a world where social media can be quite toxic, I have not really felt that.”

When you search ‘Joe Batley’ on Twitter, his tag soon comes up: @banterwithbats. Quickly you come to realise that the former Hartpury student is the life of the party, when they were allowed.

A visit to the fountain of all rugby knowledge, Charlie Beckett, revealed more into this and the simple message of “ask him who Cobra and Viper are” piqued interests massively. The pair spent time together at Gloucester, building a firm friendship before parting ways when Batley went to Bristol.

“When me and Charlie were in the Gloucester Academy together, I couldn’t drive, so Charlie was my chauffer,” Batley said. “We liked to think we were a crime fighting detective duo called Cobra and Viper.

“It was very much 70s and 80s esque, wanting to grow moustaches, and go around solving crimes. The joke was that nobody really knew who was Cobra and who was Viper. That kept changing and we had this awful card that kept breaking down.

“It was just a little bit of fun we had, and we have kept it going for five years. The joke hasn’t got any funnier, but we keep laughing at it.”

Regardless of his good sense of humour and clearly being a well-liked character at every club he has stepped into, Batley says that he has had to temper some of his own behaviour for the good of his own career.

Even describing himself as a ‘schoolkid’ when interacting with teammates, the 25-year-old admitting that he struggled with switching focus from being a character off the field and a professional on it.

“Growing up, everyone was a fan before they became a player, so you have all got experiences like that and everyone has kind of got and everyone has got a different story of how they got to where they are and I have enjoyed getting to know people,” Batley said.

“What I used to struggle with was switching into that mindset of ‘this is a job, I need to focus and be more serious on what we are doing’. It was a bit like a naughty schoolkid, because nothing was malicious, it was just disruptive.

“That’s probably the category I fell into at points, I needed to grow up a little bit and find where the line was or when the right moment was. There is plenty of opportunity in sport to show off your personality, but at the end of the day, I need to do the job first.

“The last few years have definitely been a learning curve for me on that front. I enjoy work, all the opportunities it has given me, I just get a little too excited sometimes and I am the first to put my hand up for that.”

It would be more than fair to say that Batley is playing the best rugby of his career to date. Up to now, the majority of his career has seen Premiership starts come in short spells before being shipped out on loan to Hartpury, Rotherham Titans and even Leicester Tigers.

Now with over 20 appearances for Worcester, Batley has been making his presence known for Jonathan Thomas’ side, scoring tries in his last two games for the club and earning himself a place in the Premiership Fans’ XV alongside his teammate, Duhan van der Merwe.

Having worked with his current Head Coach before, whilst Thomas served as Defence and Forwards Coach at Ashton Gate, the lock says it was the possibility of having to give the game up when out of contract during lockdown in 2020 that prompted him to get to his best.

“I was out of contract when Covid hit,” Batley said. “I went back home, where I had left at 16 to go to Hartpury, and I was sat there at 23, I was doing what I had always wanted to do (play professional rugby), but had I achieved what I wanted to achieve? No.

“I had a couple of Prem appearances, but I wasn’t really known as a Prem player, so I was wondering if that was it and I was going to have to get a proper job. Luckily the phone call from Worcester came, and my relationship with JT was a good one, and he wanted me to come to Worcester with him.

“I thought that if I am going to hang my hat on this, I am going to have to really focus on rugby and things will come from that. That was the main thing for me, that it was very nearly over.”