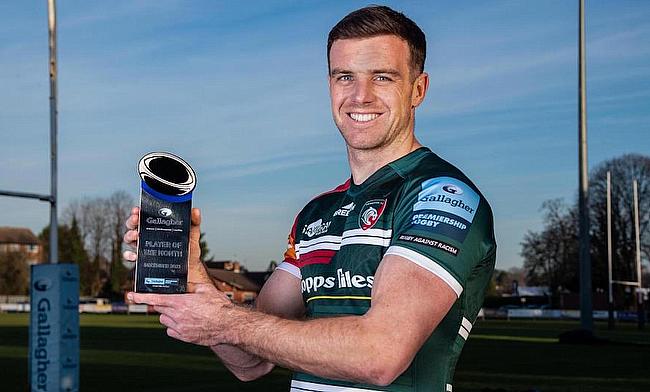 George Ford's control and composure in high-pressure moments has led to the Leicester Tigers’ fly-half being named Gallagher Player of the Month for December, according to Ugo Monye.

The BT Sport pundit and Gallagher ambassador, Monye, was full of praise for Ford, who has helped steer the Tigers to an impressive eight-point lead at the top of Gallagher Premiership Rugby.

Monye said: “When you look at Leicester's season, particularly the month of December, the results and the fixtures they've had, he's been such a significant feature.

“His control, his composure in those high-pressure moments in Europe, as well as in Gallagher Premiership Rugby, show he's enjoying some of the best form that I've seen for a long time.

“George is obsessed with bettering himself and perfecting his craft. He leads by example, and he's in a position where you need to show natural leadership in any case.”

Alex Dombrandt was second in this month’s poll with his Harlequins team-mate Andre Esterhuizen third.

Monye believes we are in the middle of an unforgettable season adding: “It's been an outstanding period of domestic rugby.

“What you've already seen in Gallagher Premiership Rugby this season is probably the most competitive season we've ever had.

Reflecting on how 2021 ended on a high, for the whole rugby community as well as Ford with his performances, Monye added: “When you look at 2021, we started it with no fans, and we ended it with a Gallagher Premiership Rugby match bolstered by a crowd of more than 70,000.

“It was great, and I think anyone there or watching it from home would have been treated to an unbelievable game of rugby.”

Big Tigers fan, club liaison and MD of Gallagher’s Leicester branch Chris Noah, said: “As Gallagher Premiership Rugby played out its final games of 2021, George Ford’s outstanding form, cool head and calm authority continued. In two tightly fought clashes to close out the year, we first saw him kick Tigers to victory over Quins, before bringing his side back into contention several times to ultimately help them seal a last-minute win over Bristol Bears.

“Both performances came after news broke of George’s move to Sale at the end of the season, and both demonstrated to all of us fans here in the local rugby community that he will play out his time at Welford Road with all the passion, commitment and focus we’ve come to expect from him since his time as a young Tigers academy graduate. Well done George – a worthy winner of Gallagher Player of the Month for the second time in three months!”

As part of his prize for being named Gallagher Player of the Month, Ford wins a shirt signed by the whole Leicester Tigers squad and framed by Gallagher to gift to a charity of his choice, to help them raise funds for their chosen cause.

Ford was judged by a panel of experts as the player who made the biggest impact in Gallagher Premiership Rugby in December 2021.