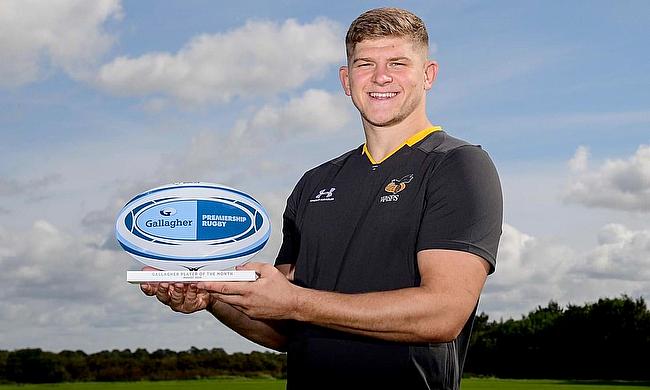 Wasps have gone from a mid-table side to genuine Gallagher Premiership title contenders since rugby restarted and Willis has been a major part of that run of form. For the season he currently has 39 turnovers, 20 more than his nearest rival, Blair Cowan of London Irish.

Monye said: "Jack has been a key reason why Wasps have been flying since the restart. We can talk about Wasps’ attacking game, which has been excellent, while they also have new management and they all look to be enjoying their rugby.

"But defensively they have been very good and one of the key features in their game, what’s making them a well-rounded side is their work at the breakdown – that’s been spearheaded by Jack Willis.

"He’s such an impactful player, he has so many big moments in games that either wrestle back momentum, create momentum or encourage teammates to become better players.

"He's just been simply outstanding - in every part of his game. Whether it be carrying, lineout, defensively, but more so than anything at the breakdown. Everyone is aware of these new law interpretations and he’s adapted to them really well. It’s been a key feature of his game.

"His work rate is off the scale but he’s not just been high impact, he’s high quality in everything that he does and that for me is what separates good Gallagher Premiership Rugby players and internationals and potential future internationals."

This is the second time Willis, 23, has captured the player of the month award having first received the accolade in February 2018, the first time the Wasps tyro was tipped for Test honours.

Monye added: "Jack was due to go to South Africa a couple of years ago and had that cruelly taken away from him due to injury but he can’t be too far away from getting his first senior cap.

"He had his injury a couple of years ago and now this (Lockdown) – and that’s what it does to top players, it gives them hunger and a burning desire to get back and get better – which is what Jack Willis has done.

"For such a young man, he’s a person that every player follows on the pitch. We get obsessed with his work at the breakdown and rightly so, because it is exceptional, but there don’t appear to be too many deficiencies in his game at the moment."

Although Covid-19 safety considerations prevented a physical presentation of his award, lifelong rugby fan, Wasps supporter and managing director of Gallagher’s local Coventry branch, Debbie Moss, said: "We might be a little biased here in Coventry but in our view no-one is more deserving of this award than Jack – his epic performance against Northampton Saints speaks for itself, particularly his breakdown masterclass that heralded Wasps’ hugely impressive victory.

"It’s brilliant to have the season back up and running, especially with Wasps right up there among the top table contenders. Hopefully we’ll also soon be able to resume our spectatorship and hospitality to really show our support as a local business."

Willis – as part of his prize for being named Gallagher Premiership Rugby Player of the Month – wins a shirt signed by the whole Wasps Rugby squad and framed by Gallagher to be gifted to a local club, school, community group or charity of his choice.

Willis was judged by a panel of experts as the player who made the biggest impact in Gallagher Premiership Rugby over the month of August 2020.

He was involved in a three-way battle to win the award eventually beating Luke Cowan-Dickie and Ollie Thorley to the prize.