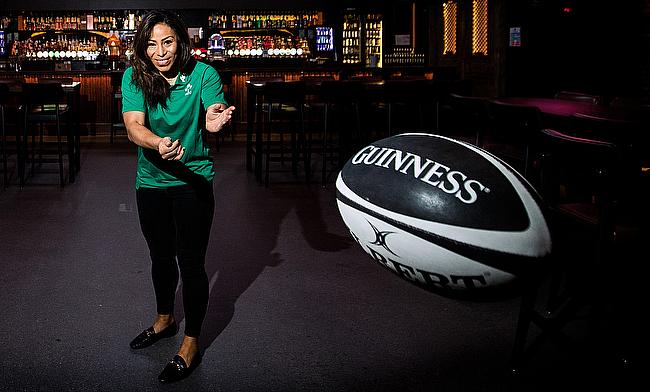 Maud Muir Exclusive: The teenage prop making an impression for Wasps and England
Donna Rose Exclusive: “I want to share my experience of living with Borderline Personality Disorder to help others”
Ireland's Kathryn Dane: “It is even more important now that we ensure the wellbeing of our players”
Exclusive: Jess Breach Q&A - I love being a role model

One of the best things about the Women’s Six Nations being played in its own standalone window this April is that it gives supporters a chance to see the top quality young players that are coming through the ranks.

So far, all six head coaches have given opportunities to players in the 19–22-year-old age bracket and some of those have grabbed their chance with both hands.

Take last Saturday, for example, when 19-year-old winger Beibhinn Parsons used all of her power and pace to escape the attentions of two Welsh tacklers on halfway before charging under the posts for Ireland.

Parsons’ score was named the Try of the Round, while 20-year-old back-row Dorothy Wall was also on the scoresheet in the 45-0 away victory at Cardiff Arms Park.

It led to them both being named in Maggie Alphonsi’s Team of the Round, the England legend saying: “Parsons plays with a maturity beyond her 19 years and looked electric at Cardiff Arms Park, she has so much potential while Wall scored a try and was everywhere in an all-action display. Her commitment to every breakdown was really impressive too.”

As well as Parsons and Wall, 21-year-old centre Eve Higgins made her debut last week while second-row Brittany Hogan (22), scrum-half Emily Lane (22) and stand-off Stacey Flood (24) earned their first caps off the bench against Wales.

No matter what age they are, all of Ireland’s squad know they will face a much stiffer challenge this coming weekend in the Pool B decider against France in Dublin.

The visitors will be favourites, but head coach Adam Griggs has given this Ireland group confidence - and senior player Sene Naoupu is excited about the future.

“We have spent a lot of time together in camps over the last few months and that has helped the younger and new players settle at this level,” centre Naoupu, 37, told TRU this week.

“It's about being exposed to quality environments that enable you to thrive and that's the high-performance environment that we need, so we can get the output at the highest level.

“There's a healthy balance in our younger players. They are fearless but also put in the hard work. All of us are working extremely hard around the detail of what you need to do to perform in your role.

“Our new caps showed that as well last week. It doesn't matter whether you've been here for the longest time or the least time, everyone is making sure they are working hard on detail both on and off the pitch.

“We’re capable of competing with the best, we are. We believe that and we’ve been working extremely hard.

“We have world-class coaching, world-class facilities, and we’re well resourced. We’ve had time together and that has given us that sense of belief in what we can do, but we just need to test it against the best in the world, so we are looking forward to that exact opportunity this weekend when France come to play.”

Growing the game: “Visibility is one of the key aspects”

Naoupu - who was speaking on Wednesday to help launch Guinness’ ‘Never Settle’ campaign which aims to make rugby a more inclusive and accessible sport for everyone regardless of gender, race or sexuality - is positive about the future of the women’s game.

“The standalone Six Nations window has given us a super opportunity,” the New Zealand-born 39-times capped Leinster player states.

“Over the weekend, for example, after playing Wales, we got messages from people speaking about the males in the household being really impressed with women’s rugby and our squad and those sorts of things.

“As a team, we know we can be much better than what we were. Absolutely, we had some special moments, but there are other areas of our game we can be better at.

“You can already notice a difference in a few days. You know, it’s amazing having people see the game. Visibility is one of the key aspects of making sure everyone belongs and everyone is respected in the game.”

Return from health scare: “I've so many things to be grateful for”

Every rugby fan has been delighted to see Naoupu back on the field following a health scare last year.

Last February, she suffered a shoulder injury during the Women’s Six Nations match with England and the subsequent scan revealed a tumour in her neck.

That led to surgery to remove it in July and, amazingly, she was back training in late August/early September.

Fast forward a few months and with plenty of training at the IRFU High Performance Centre at Abbotstown and game time under her belt, she is back to her best.

“I'm feeling good. My voice is pretty much 90% back, so the girls are probably not enjoying it, but yeah, I'm able to communicate a bit better and breathe a bit better, so it's great,” she explains.

“It was safe to come straight back into training when I did, so the timing was pretty seamless and I was really lucky to get back into it when I did.

“I think I am a bit of the eternal optimist, but like everyone, there is always a balance. I've so many things to be grateful for. Why would you not be positive?

“We're pretty fortunate to have these games played. For us as rugby players, we just want to play games and we have the opportunity to do that.

“We've worked extremely hard over the months to get to this point where we have the opportunity to play and do what we love with the team that we love, and it's just one of those things where when you are thankful for what you have, you tend to be a bit more positive.”

Sene Naoupu was speaking at the launch of Guinness’ ‘Never Settle’ campaign which plans to tackle the lack of visibility for women’s sport and specifically representation of women in rugby by expanding the profiles of women’s rugby.

Ireland v France takes place at Energia Park in Dublin on Saturday in the Women’s Six Nations and is live on the BBC iPlayer (2.15pm kick-off)