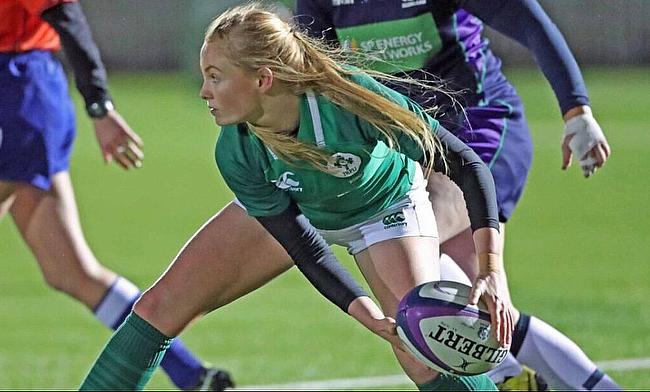 Tackle height was one of the major talking points during the Six Nations in February and March and it looks like being something that will impact the Women’s Six Nations too.

In recent days, we have seen Scotland front-rower Molly Wright banned for the rest of the tournament following her sending off in the Pool A clash with England after her arm connected with the head of opponent Vickii Cornborough.

As a result, there is no doubt that Ireland will have been working hard on keeping their tackle heights low in training in the build-up to their Pool B opener with Wales in Cardiff this coming Saturday.

And one of their players who knows more than most about the subject is their scrum-half Kathryn Dane.

Last year, the Old Belvedere RFC and Ulster No.9 was the recipient of a prestigious Irish Research Council grant to fund her PhD studies at Trinity College Dublin and she is investigating injuries related to tackling in women’s rugby.

“I'm a physiotherapist so I'm looking at safety and optimal tackle outcomes in women's rugby,” the 24-year-old told TRU this week.

“It is all being done to help key stakeholders like referees, coaches and policy makers make the game safer for female rugby players.

“I'm in the early days of it so I'm doing a bit of a literature review at the moment and we're finding there is very little out there in the women's game.

“A lot of it is being informed in research in the men's game. Obviously we're not just small men, so it'd be really good to start profiling the women's game itself and see if there's any differences or comparisons.

“With the growth of the women’s game, it is even more important now that we ensure the wellbeing of our players. If there are ways the game can be refereed better or coached better in tackle contest, I’d want to know what that is.”

On top of her studies, the player from Fermanagh is doing an internship in the physio department at Leinster Rugby and has been in camp with Ireland a lot as they get ready for this competition.

Quite a lot of juggling for the player who starred in the 2020 Women’s Six Nations, but she previously said: ”I hate doing things half-hearted.

“Everything I do I want to be doing it to 100 per cent of my ability and I was worried that I'd spread myself too thin, but everyone was so supportive, my housemates here in Dublin, my parents, my work colleagues and my team-mates, everyone is really helpful and they reassured me that I could do it and that they'd be there to support me through it all when I needed it.

“Life doesn't tend to work to your timescale. It just so happens that all these three great things, the internship, the PhD and Ireland, are all happening right now at the same time, but I feel very fortunate to have them.”

Ireland have not played a competitive match since October when they defeated Italy 21-7 at Donnybrook in a game that was delayed from earlier in the year as part of the 2020 Women’s Six Nations.

The players have had to keep themselves motivated over the last few months, but that has not been too difficult given the professionalism of their training camps at the IRFU High Performance Centre at Abbotstown led by coaches Adam Griggs and Kieran Hallett.

And a large number of camps have allowed them to really work on specific parts of their game individually and collectively.

“We're so lucky we have amazing coaches and support systems in place that keep us in the right place and keep us motivated,” Dane states.

“As you can imagine, 20 weeks straight of training is very demanding, even emotionally. I haven't been used to training for that long and not having a game to break it up. You do have to stay motivated to keep going and pushing on.

?? "There is a little bit of an expectation on myself to go out there and show everyone what you’ve got and make the nation proud." ???

Ireland scrum-half @KathrynDane2 is relishing the chance to pull on the green jersey again ??#ShoulderToShoulder #WALvIRE

"The strength and conditioning part of our game has definitely doubled if not tripled since last year's Six Nations, just because we've had so much time to work on it.

“Especially when it comes to building up our robustness and physical resilience, as a smaller nation compared to the others, we've definitely worked on that and it'll stand to us.

“We've had Adam Griggs as our attack coach and Kieran Hallett as our defence coach really working on training us at an intensity that's above match intensity so that we can perform at a really high tempo and be comfortable in uncomfortable situations.

“In that sense, our skill execution, our decision making, our intuition and instincts around the field should really have improved.

“We won't really know for certain until we get on the pitch on Saturday, but hopefully that will show."

“We've had a few 5-a-side football tournaments and I was able to unleash my skills!”

When you are training for so long without a competitive match, you need some fun to break up the routine and Dane revealed that the playing squad had taken part in a mini-Olympics and some 5-a-side football to keep team spirit - and competitiveness - high.

“The mini-Olympics was class,” she said. “We've also had a few 5-a-side football tournaments and with my soccer background, I was able to unleash my skills a little bit which was quite nice.

"Especially being one of the smallest in the team, it's nice that I don't get overpowered by the big girls in the 5-a-side football. Little things like that really do keep the morale high and helps the team bond.”