Inkster: 'I was shell-shocked when I got the call to play at the Melrose Sevens' 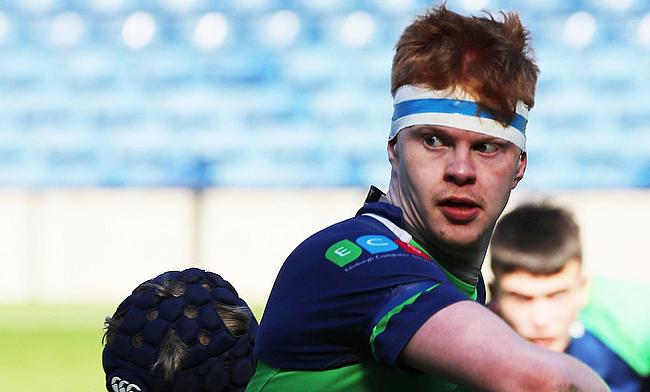 'Rugby means a lot to the town' - We explore North Berwick’s role in producing rugby stars
'To win the Melrose Sevens was just amazing, thinking about it brings a big smile to my face!'
‘It shows the levels we are hitting’ - Jamie Farndale positive about Scotland 7s ahead of Hong Kong
'We have to believe and show no fear' - Scott Forrest

It has been quite a few weeks for Boroughmuir young gun Gavin Inkster, firstly leading the club’s under-18 team to Cup glory and then going on to play his part in a good start to the Kings of the Sevens campaign for the Boroughmuir senior team.

Having won the under-18 Shogun Conference this season, the Edinburgh club’s age-grade side went into the National Youth Cup final against Ayr/Wellington at BT Murrayfield towards the end of March as favourites.

And it was all going well when they led 12-0 at the interval - only for the opposition to bounce back in some style.

Indeed, Ayr/Wellington found themselves 14-12 ahead going into the closing stages.

“We were really frustrated by how things had turned around, but we just had to keep as calm and composed as we could and trust our team work,” 18-year-old back-row Inkster told TRU.

“I had said to Calum Anderson, our stand-off, that if ever he fancied taking a penalty chance to tell me and fair play to him he held his nerve with the one we got late on to get us over the line 15-14.

“To be able to lift a trophy at the national stadium is something that none of us will ever forget. We have all come through the youth ranks at the club together and had some low points in the past, but this was most certainly the highest high!

“From the start of this season I just got a feeling that everyone was willing to put in the hard yards required and everyone was on the same page as the coaches when it came to what we were trying to do and, thankfully, I was proved right.”

With a long XVs season in the bag and vital school exams to come before the summer break, some may have just put their feet up and basked in the glory of that memorable day at the national stadium.

He was straight into senior sevens training aiming to gain some experience alongside the older players to help him build for 2019/20.

“When I joined in with sevens training after the Cup win the boys were already working hard and then they reached the semis at Gala, so I didn’t know if I would get a chance in the first VII squad or not,” Inkster, who has been with the club since moving from Portobello in 2012, explained.

“So, to then be named in the squad for the Melrose Sevens was pretty unbelievable, I was shell-shocked when I got the call from [coach] Neil Wood. It is such a big event in front of a big crowd and I had never even been down to watch before, so to then be playing in it was a bit surreal.

“I just tried to listen to the senior players around me on the day and do my job and we managed to beat Hawick in the first round.

“We then went out [defeated 15-12 by Jed-Forest in round two] which was frustrating, but we knew that we had set ourselves up for the following weeks and the squad was starting to come together. I was also starting to get used to the hooking role in sevens too.

“Next up was the Hawick Sevens last Saturday and that was a brilliant day.

“Playing against Watsonians in the quarter-finals was a tough draw, but when we managed to get through that one [33-28] we knew we had a chance.

“To then go on and beat Hawick and Edinburgh Accies to get the trophy was excellent and although I wasn’t playing on Sunday the boys reached the final of the Berwick Sevens on Sunday [losing to Watsonians] so with five events left it keeps us in the mix.”

Currently Edinburgh Accies lead the way in the Kings of the Sevens table with 30 points with Watsonians second on 28 and Boroughmuir joint third with Melrose on 22.

With events at Langholm, Kelso, Earlston, Selkirk and Jed-Forest still to come the title is up for grabs and Inkster is just keen to keep working hard and push for selection.

“The next few weeks of sevens will be exciting and I can’t wait,” the Portobello High School pupil concluded.