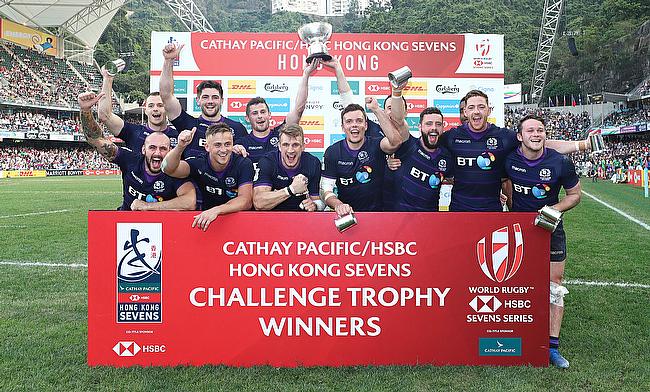 University rugby on show at Melrose Sevens
'To win the Melrose Sevens was just amazing, thinking about it brings a big smile to my face!'
Australia, Scotland miss out on quarter-final of Hong Kong leg of HSBC World Rugby Sevens Series
‘It shows the levels we are hitting’ - Jamie Farndale positive about Scotland 7s ahead of Hong Kong

Scotland rugby stars who grew up in North Berwick have been talking about the role the East Lothian town has played in their sporting journey as the local club gets ready to host their annual sevens this weekend.

Scotland rugby stars who grew up in North Berwick have been talking about the role the East Lothian town has played in their sporting journey as the local club gets ready to host their annual sevens this weekend.

Ask most people north of the border what North Berwick is famous for and they will probably tell you the Law - a 613 feet hill which looks out on the town - as well as the Bass Rock, the beach and the golf courses.

It is a very popular summer holiday resort for families, but the town has also produced some top rugby talent over recent years thanks to the hard work put in by North Berwick High School and North Berwick RFC.

Current Edinburgh Rugby players Lewis Carmichael, Chris Dean and Callum Hunter-Hill grew up in the town which is about a 35-minute drive outside of Edinburgh and recently at the Hong Kong Sevens there were two Scotland men’s players - Tom Brown and Harvey Elms - and three Scotland women’s players - Liz Musgrove, Annabel Sergeant and Megan Gaffney - with connections to the town involved.

Brown, who has one Scotland XV-a-side cap to his name and has been at Edinburgh for the last nine years, joined the sevens squad for that World Series tournament and the most recent one in Singapore.

The 29-year-old back told TRU: “I grew up in North Berwick, went to Law Primary School there and as soon as I was able to play rugby, I was along at the local club getting involved in the minis.

“That was where my love of the sport came from because it was just so much fun and the community really gets behind the rugby club and tries to support them as much as they can.

“The volunteers are the lifeblood of every rugby club and at North Berwick it is certainly no different. A lot of people go above and beyond to help out there and it has paid off with some of the talented players that have come through the ranks as well as just being a great social place to play for amateur players.

“If you look at someone like Harvey [Elms] who is now in his second year as a core Scotland Sevens player, the rugby club and the local high school really helped him develop and made him into a quality player before he moved to Currie Chieftains and beyond.

“I moved to Edinburgh Academy for secondary school, but I have nothing but good things to say about North Berwick and I hope the sevens goes well this weekend.”

Brown mentioned centre Elms and the 23-year-old regular with Scotland Sevens said: “I grew up in North Berwick and played for either the club and school all the way from mini rugby until I left high school.

“Rugby means a lot to the town. A lot of people are passionate about it. I have very fond memories of growing up playing rugby there. The commitment from the volunteers to coach the kids was very important. It is a place that is recognised for developing players.

“I have great memories of the North Berwick Sevens, I played in my last year of school and we managed to win it, I remember Lewis Carmichael and I both got the opportunity to play.”

Of course, Scotland’s women came within one win of securing a place on next year’s World Series circuit in Hong Kong - and their East Lothian trio played their part.

Growing up in North Berwick, Musgrove never sat still as a child and when she saw a judo demonstration at her primary school she instantly knew that was for her.

She pursued that and athletics, but always had rugby in the back of her mind.

Fast forward to 2016 and she took up the sport at the University of Edinburgh, becoming a winger.

From there, Musgrove broke into the Scotland XV-a-side and sevens teams and, upon graduating from university last summer, moved to Hong Kong where she works for Little Legends Sports and coaches the under-19 girls’ team at Hong Kong FC.

Sergeant, the 30-year-old winger who has recently returned from a spell in the southern hemisphere to regain her place in the Scotland XVs and sevens squads, did not take up rugby until university, but believes North Berwick played a big part in her love of sport.

“Me and my family moved to North Berwick from Plymouth when I was 10 and we lived there until I left for university,” Sergeant recounts.

“As a 10-year-old I was obviously sad that we were moving away from friends and everything I knew, but looking back, I’m so glad we made the move. I have very fond memories of growing up in North Berwick.

“We would spend the majority of the summer days outside either playing sports in the Lodge, down at the beach swimming in the sea or jumping off the pier, playing golf or tennis or riding our bikes around the town. It was great fun.”

Like Sergeant, fellow winger Gaffney - who also plays in the forwards in sevens - has also been on her travels of late, but has now come back home.

“I loved growing up in North Berwick,” the 27-year-old said.

“It’s a really lovely town and there’s loads of opportunities. I also really love how sporty the girls are and are really encouraged to try out lots of different things.

“I played for North Berwick minis and I don’t remember there ever being any issues with me being a girl. I started playing again while at high school thanks to a teacher, Suzanne Ritchie, who started up a team and back then I actually played with Annabel’s younger sister.

We’re looking forward to our annual North Berwick 7’s & Under 18 10’s on Saturday.
Many thanks to Littlejohn’s who’re sponsoring the 7’s & Howard Selby who’re sponsoring the 10’s.
The sun will be out and promised to be a great day at The Rec!
Details of the draw to follow. ???? pic.twitter.com/G5WIA9oWPV

“Although girls rugby isn’t a massive thing in the town because we were encouraged to try lots of different sports, it meant we could transfer skills across.

“I know Liz did judo and athletics and Annabel played hockey so it meant we had the basic coordination to make learning rugby easier.

“I also think it’s great how well Harvey’s doing. He’s shown that just because you don’t get a pro contract at 18, it doesn’t mean you should give up and hard work pays off and North Berwick is proud of him.”

All of which leads us nicely on to this coming Saturday and the North Berwick Sevens at Recreation Park.The senior sides will be competing for the Stewart Cup starting at 2pm with the final set to be at 5.30pm.

Earlier in the day, the 11th playing of the under-18 10s tournament begins at 9.30am. As well as the trophy presentation for the winners, there will be an award of the Josh James-Stewart Memorial Trophy for the under-18 player who has best demonstrated the values that drive the club.

To complete a packed day, the club’s under-13s will be playing against Darlington and the under-15s against Harrogate.

Keith Hogg from the club said: “We are all really looking forward to the day and we are all very proud that Tom, Harvey, Liz, Annabel and Megan represented the town so well in Hong Kong, they have all done really well and are good role models."