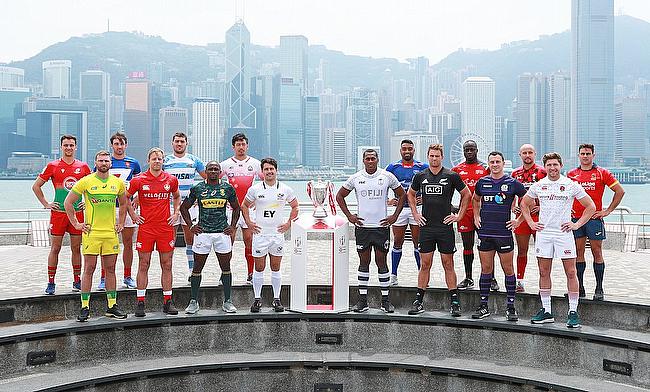 Kyle Steyn’s recent form for Glasgow Warriors and his inclusion in a Six Nations training squad by Gregor Townsend is a glowing endorsement that sevens continues to play a vital role in the growth of the Scottish game.

That is certainly the view of Scotland Men Sevens co-captain Jamie Farndale who, over the last couple of years, has seen players such as Dougie Fife, James Johnstone, Damien Hoyland, Darcy Graham, George Horne and now Steyn play alongside him before starring for Edinburgh Rugby or Glasgow Warriors and, in some cases, the Scotland XV-a-side team.

Way back in September, in an exclusive chat with TRU, Scotland Sevens head coach John Dalziel told us that South African-born centre/winger Steyn was “straight out of the Huw Jones mould.”

And, after the 25-year-old Scottish qualified player did well for the Scots on the first four legs of this year’s HSBC World Rugby Sevens Series, Steyn was drafted in by Warriors’ head coach Dave Rennie and has been a massive hit in the Glasgow backline.

Indeed, such has been his impact that he has kept more experienced campaigners out of the starting XV, trained with Scotland in March and will be leaving the sevens programme this summer to join the Scotstoun outfit on a one-year deal.

And, rather than be frustrated that Steyn is moving onto pasture new so soon, 25-year-old Farndale told TRU from Hong Kong: “It is great that guys in our sevens programme are being looked at, it shows that we are doing something right.

“In rugby, things can happen quickly and you can find yourself moving through the ranks or to a different representative team rapidly.

“On the World Series we are playing at a high level and the pro clubs know that if guys are required to come from our squad into the PRO14 or into other games, then they can certainly do a job.

“In recent years we have seen the likes of Damien [Hoyland], Darcy [Graham], George [Horne] and now Kyle go from us straight into either the Edinburgh or Glasgow teams and as a sevens group, we are playing on a world level and used to big games regularly.

“Guys have even quickly gone from our programme at times into Scotland training camps for the Autumn Tests or the Six Nations seamlessly and that shows the levels that we are hitting.

“We all know that as a group, all we can control is how we play on the World Series and other opportunities may well come from that.”

Farndale himself has been involved with Edinburgh at various times, but for now, his focus is fully on sevens and helping Scotland build on an encouraging campaign to date over the first six tournaments.

The team, who are also led by Robbie Fergusson, are ninth in the standings with 33 points and are well on the way to beating last year’s total of 47 points.

On Friday evening in Hong Kong Stadium, they play their opening Pool A match with Samoa (5.42pm/10am in the UK) before taking on South Africa and Japan on Saturday.

“The week has been going well, it is always a busy one out here in Hong Kong both on and off the pitch,” Farndale said.

“We had a good hit out against Spain on Tuesday and that was really good while the level of accuracy pleased me.

7s | The Scotland squad enjoyed a hit out against Spain this morning as they continue to acclimatise. @MyproteinUK supporting the team as they prepare for this weekend’s #HongKong7s | #AsOne pic.twitter.com/s5mjSlC6C7

“We are definitely happy with how we have done so far this year, we have found a bit more consistency which comes with experience.

“A couple of years ago a lot of the members of this squad were new to top level sevens, but we have grown together as a group.

“We want to be hitting quarter finals and then going on from there and in the first three tournaments in Dubai, South Africa and New Zealand, we made the last eight and managed to pick up 13 points at the latter event by finishing in fifth.

“In Sydney we struggled with a few injuries and then did a bit better in Vegas before slipping of things a bit last time out in Vancouver, but we are still happy with where we are with four tournaments to go.

“Now it is about hitting the levels we did in Hamilton again and putting ourselves in the mix for the quarters again.”

And their hopes of getting out of the pool into the Cup competition come Sunday have been boosted by the inclusion of Edinburgh backs Tom Brown and Sean Kennedy.

“Tom and Sean both have experience with the sevens set-up before and a lot of rugby under their belts,” Farndale explained.

“In terms of Tom, he has slotted in really well this week. He just reads the game really well and in sevens that is very important and we will benefit from his quality.

“Sean too, he loves sevens and he is a very sharp passer who finds gaps well.

“As a group we have a real focus on doing well this weekend. Wherever we go in the world we are lucky to always find Scotland flags there to cheer us on, but in Hong Kong it is a different level and we always get a buzz playing in front of such a big crowd with a lot of Scots in it.”