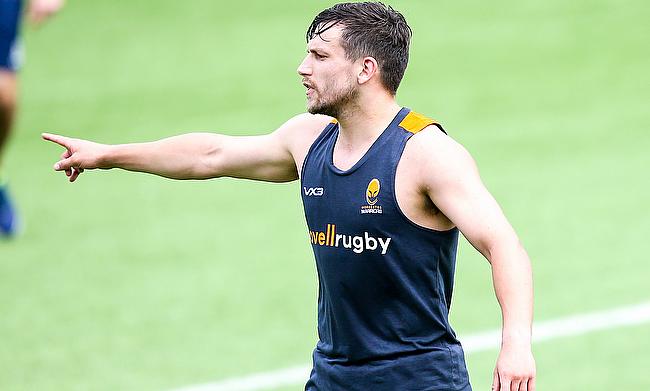 Jake Cooper-Woolley: Going to university was ‘very beneficial’ for my rugby career
'You can help save lives' - Why Matt Jess is aiming to turn the tide on mental health
David Denton: Playing rugby doesn’t automatically mean you will be successful in life
Worcester Warriors director of rugby Alan Solomons signs new deal

Following on from the Guardian’s interview with former Wasps lock Kearnan Myall, Joe Harvey and Chris Heal spoke with Worcester’s Jono Kitto and Sale Sharks’ Denny Solomona to talk about their experiences of mental health within sport.

“I have no issues with talking about that sort of stuff,” Jono Kitto said when asked about mental health and the stigma that comes with it. "I think when I first started talking about it, I was 20 years old, so seven years now of talking about it.

“I’m happy to take whatever ramifications come, if there are any, from talking about it. Someone might take grievance to the fact that a male is talking about their emotions, but they wash over me, I’m not really concerned about that.

“What I am concerned about is making sure that people feel that it is okay to be struggling with it and have a chance to see that others around them are as well and there is a hope to get through the darkest of days and that life at the end of the day is worth living and can be lived well.”

Between the ages of 19 and 20, Kitto told Talking Rugby Union about how he struggled with mental health and how talking things through helped the scrum-half manage his depression and move forward with his life.

1 in 4 suffer from mental health issues in any given year. Sportsmen and women are no different. Don't suffer in silence. #LiftTheWeight pic.twitter.com/JCHhWJhKes

“I got to the point of, without putting it too bluntly, being suicidal,” said Kitto. “I didn’t try to take my own life, so a bit different in terms of Kearnan’s story, but for me I had a couple of things in my life that meant I wasn’t prepared to do that. But I was hoping, every day for about eight to 12 months, that I would walk across a road and a car would hit me.”

“I was really hoping that in some way, without me doing it, I would not live anymore because I was pretty bad. It’s chalk and cheese from where I was to where I am now. That’s come through a few things. It has come through being able to talk about it and offloading some emotional baggage that I had when I was first dealing with that.

“Taking the first step to actually talk about it was with my parents. That was the first big step to actually deal with it and overcome it. I suppose the biggest step forward over the past few years has been through counselling that I have taken to analyse why it happened in the first place, where my thinking was going wrong and trying to attack certain aspects that would make me predisposed to having relapses.”

Having since worked with several groups back in his native New Zealand, Kitto is very much on the other side of his struggles. Recently married, Kitto is set to play a major part in Worcester’s Premiership Rugby campaign after re-joining the club two years after a four-week loan spell from Leicester Tigers.

Having most recently played for Northland in the Mitre 10 competition in New Zealand, the former Baby Black’s story is one that supports the work of charities such as, Looseheadz, who are making it easier for both rugby players and the general public to talk openly about their feelings.

When Denny Solomona walked into a side room at Sale Sharks’ Carrington training ground, we were greeted with a smile and a warm handshake. With all the negative headlines which have surrounded the former rugby league star over the years, it quickly became apparent how much of a positive impact the Sale winger is having at the AJ Bell since switching codes two seasons ago.

In 2018/19, Solomona was integral and his 12 tries for Sale helped them eventually secure Champions Cup rugby for the upcoming season but despite a very satisfying personal campaign, the 25-year-old knows life isn’t always straightforward.

Solomona would certainly have been pleased with how he performed on the pitch, but it was his efforts away from the field that caught the attention for all the right reasons. The winger has played an important part in Sale’s community work and his contribution to their programme and his dedication to raising awareness of men’s mental health issues saw him nominated for the Gallagher Insurance Community Player of the Year award last season.

“It is about time I am recognised for something else rather than something bad!” Solomona said jokily. “Everyone has kind of got this misconception of me that I am this bad boy in rugby. I am far from it. I have made mistakes and I have learnt mine.”

Indeed, Solomona admits he is still young and continuing to learn, but he is also keen to offer his advice. In an interview with Rugby Pass back in March, he revealed he struggled with mental health problems and is now keen to help others in any way he can.

“All I am trying to do now is to put a positive spin on what seems to be daunting subjects like suicide, depression and mental health,” Solomona told TRU.

In light of #MentalHealthWeek just wanted to say it’s not weak to speak be your truth don’t live up to your fans/audiences love yourself from the inside out and know you’re not alone ?? DM ME IM ALWAYS HERE FOR YOU #MHW

“It is more important, especially in rugby and us as rugby players, to understand the way we feel and to not be caught up in this identity that we are given by other people that we are just a big ugly bunch of rugby players that just bash each other up for a living.

“We do that, but we also feel. We also surf Twitter and we see the comments here and there and it can be distressing. Words do hurt, especially after a loss.”

Solomona works closely with the foundation, Looseheadz, which raises awareness for mental health by using rugby as a platform. He is one of many ambassadors associated with the charity who are connected to Gallagher Premiership clubs and Solomona hopes the work he does with individuals, such as academy hopefuls, can have a positive influence on their lives.

He said: “I recently did a seminar with the academy players coming in. It is to get them to recognise that although it is a blessing to have what we have, it is also a curse if you make the wrong turn here and there but whilst making that wrong turn, there is always a way back.

“There is always a way back to where you are meant to be and I think they need to realise they are not as invincible as they think they are. I have been doing this since I was 15 so I am 10 years running now. If I can help with at least one good decision in their life, then I have done my job as a rugby player because I may have saved someone from doing something potentially bad.

“I think it is really good that I have kind of taken an active role in the community. I have always been there, but I have been a silent man. I just jumped under the radar because I don’t want the recognition. I do it because I actually care about people.

“That is probably why I have been in the senior group at the club now because I will have that different perspective on what we do and how we do it and working with Looseheadz has helped with this also.”