David Denton: Playing rugby doesn’t automatically mean you will be successful in life 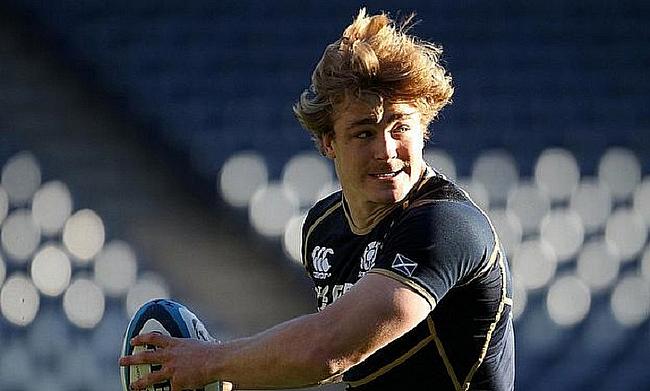 Uncapped Glasgow duo Scott Cummings and Kyle Steyn added to Scotland's training squad
Concussion ends David Denton's season with Leicester Tigers
Horwill: Preparation for life after the game is key
Bath’s Tom Dunn: ‘My advice would be to grab university rugby by both hands and run with it’

Before the interview begins, David Denton is more than aware there will be a question or two about the concussion he suffered back in October.

In recent conversations with the media, the focus has mainly been on Denton’s long spell on the sidelines after he took a serious knock to the head against Northampton Saints at Twickenham.

But, he knows the questions cannot be avoided because the Leicester Tigers man hasn’t played a single minute of rugby for just under nine months and the back-rower said: “It has been a tough period for me.

“It was a decision made by the medical staff and it has all been about taking it slow at the moment. The realisation was that health is the most important thing”

Having missed almost all of his debut Gallagher Premiership campaign, Denton is hoping to be back in training soon, but the 29-year-old is also realistic and accepts he may not be able to play rugby again after suffering his fifth concussion. A life after the game is something Denton is now preparing for and the Scotland international has signed up to do an MBA at the University of Warwick.

"Awareness is much higher than in the past where there was more of a ‘shake it off’ attitude."@wherebenmercer2 chatted to Leicester Tigers club doctor Kal Parmar about concussion, what’s being done & whether the new initiatives have benefitted players.https://t.co/jP2rVWvDNQ pic.twitter.com/Sz9bLkOxjK

“When I first joined Edinburgh [in 2010], I was in and out of education,” said Denton. “I found it hard to continue it because rugby became time consuming.

“Now, I feel it is time to bite the bullet and I have decided to go to Warwick Business School. It is also good for me to focus on something different because I have been guilty of focusing on other things.

“I did economics at Edinburgh and studied it for about a year and a half.  It was tough because I slowly spent less time on it, but you have to be aware that playing rugby doesn’t automatically mean you will be successful in life.

“I had to put everything into rugby because I was also starting to become involved with Scotland. I priortised my rugby and it was the right decision at the time. It has benefitted me, but now I know it is time for a change.”

For players, the transition out of professional rugby is being highlighted even more, but organisations such as the RPA have been able to help Denton, as well as others, put plans in place for when their careers do come to an end.

“It is doubled-sided now,” said Denton. “Players want to go into education, but clubs are now more aware of it. Everyone can see the rewards at the end.

“The RPA have been very helpful with the transition for me and you can see how much it is helping players too, especially over the last six months with me.  The education aspect is key because yes, we play rugby and we do get a good salary, but it is not a football salary. You do have to work after, and that education can put you in the best position possible.”

It is not only towards the end of a rugby players’ career where education can prove to be a vital stepping stone. Increasingly, more young athletes in the sport are combining a degree with high level rugby at university with the likes of Harlequins’ Alex Dombrandt being a prime example.

At Leicester, they continue to develop a strong relationship with Loughborough University and Denton believes players can only benefit from the link between the two institutions.

“Rugby can open a lot of doors”, he said. “It allows you to meet other people and gain life experience which can be the same for universities. Playing rugby is like been in an accelerated environment, but combining university and playing allows you to learn, adapt and develop.

“At Leicester, we do have that link with Loughborough. We do have guys training with us maybe once or twice a week and that is great for them. They are playing a high-level rugby with us and Loughborough which is not hampering their development.”

#CaptainsColumn@Alex_dombrandt: “It was massive to have that opportunity at university level to play at one of the biggest stadiums in the world. If you can’t get up for it, then you probably shouldn’t be playing the sport” ??#BUCSSuperRugbyhttps://t.co/sGMs8l8NoC pic.twitter.com/Jn3FPGQ3Zq

Players such as Jordan Olowofela, Tom Hardwick and Joe Heyes have all experienced the Loughborough environment in recent years and their aims will be on the Tigers’ first team set-up once again next season.

For Leicester, 2018/19 was a difficult campaign as the 10-time English champions diced with danger, but eventually, managed to avoid relegation. This week, it was announced the club was being put up for sale as the Tigers look to halt their decline, but Denton feels this isn’t a massive rebuilding job for his side.

“Leicester wants to be successful,” he said. “It is an historic club and a proud club. Last season was a learning curve for us, and we can’t afford two seasons in a row where we are not competing.

“I think people [investors] will be keen to get involved because of the size and history of the club. The fans play a massive part in that too. We were getting 20,000 and more at games and that is unbelievable despite a disappointing year.

“If you look at it, it is such a tough league and last year was the toughest. I think there were only 10 points between 10th and the top four so you do have to have the mentality of squeezing out every point. We definitely have the players and we know we can really challenge. We have the belief, but we know there is a long way to go and we have no excuses. This is not a rebuilding phase. It is about getting back to where we want to be.”

Denton is still aiming to play a part for Leicester next season, but in an interview with The Scotsman in April, he confirmed he will miss this year’s World Cup with Scotland due to his concussion.

Four years ago, he was almost absent from the showpiece event after sustaining concussion following a collision with Paul O’Connell whilst playing for Edinburgh against Munster.

The back-rower then went on to play an integral part in Scotland’s successful World Cup campaign in 2015 as they reached the quarter-finals and Denton believes the current depth Gregor Townsend has at his disposal is a major weapon heading into the tournament, which begins in September.

He added: “I think over the last four to six years, the squad depth has really increased. Credit must be given to Scott Johnson and Gregor Townsend because I think if you were to replace Scotland’s entire strongest squad, it would still be strong!

“I think going into the World Cup, we do have a tough pool [which includes Ireland, Japan, Samoa and Russia], but that depth we have is massive because you will pick up injuries in key position at some point.

“I think we have to concentrate on being consistent in the pool before any talk of knockout games! Japan won’t be easy because they are the hosts and Samoa are also dangerous because they never give up, especially at a World Cup.

“It is about getting through the pool and then progressing from there. What will be key and I will use a golf analogy here, but we need to make our bad shots not as bad if that makes sense! If we aren’t playing well, we need to try and make sure we find a way of getting a positive result and that is the level we need to be at.”