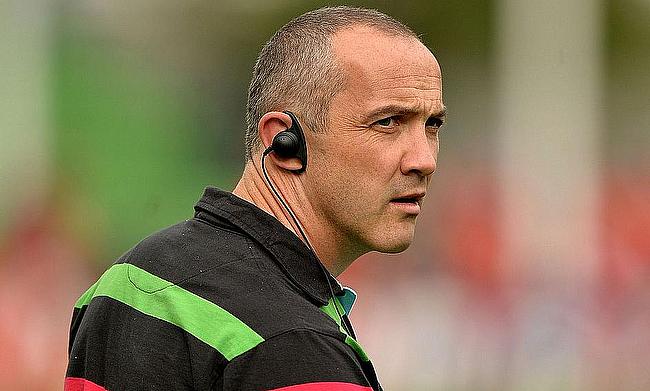 Conor O’Shea has admitted he felt ‘incredibly well looked after’ throughout his playing career and believes there are constant improvements being made to reduce the risk of concussion in rugby union.

The RFU’s Director of Performance Rugby played during the same era as England World Cup winner Steve Thompson, who is part of a group of ex-professionals who are preparing a negligence claim against rugby’s authorities.

The eight former players in question have all been diagnosed with early onset dementia which they believe has been caused by repeated blows to the head.

“I am thinking about Steve, Alix and Michael first and foremost,” O’Shea said. “I played in that era and that was my era. I played against Steve when he was Steve Walter, not Steve Thompson when he was a young kid and we all go back to that stage.

"It probably needs to be addressed sooner rather than later.”

Dragons forward Greg Bateman believes the true extent of rugby’s concussion problem is still an unknown, but it must not be ignored. https://t.co/XY3gTNVQY1 pic.twitter.com/8tMA9X7k27

"We knew what we knew. We were incredibly well looked after with the knowledge that we had then.

“I loved my rugby so I find it really difficult listening and hearing what we are reading about at the moment, but we will get more facts on that as time goes on.

“The focus is also on what I have seen happening and evolving. The way players are looked after, monitored and loaded. The law adaptations and regulations through the game as you go through the age groups show people are incredibly well looked after and I know we will continue to push the envelope to make sure that gets better and better.

“I have no doubt that it is always player first and it always has been. I know it has been questioned from time to time, but it always has been from me being a player through to now and into the future. Hopefully, we can carry on evolving and becoming better.”

RFU CEO Bill Sweeney also revealed the Rugby Football Union have not received any contact from the group of former players who are proposing to take legal action.

“It’s important to point out that we haven’t received any formal legal approaches yet so all we’re knowledgeable about is what we’re reading currently in the media,” Sweeney said.

“We don’t have any specific case or specific conditions laid out, so it’s a bit premature really and hypothetical to speculate on what’s going there and we haven’t got into any detailed discussions on insurance or cover because we don’t know the nature of what’s been presented yet.”

Good to catch up again with @ben_cisneros to discuss the potential concussion group litigation.

Ben explains some of the key issues from those preparing the legal action. #sportslawhttps://t.co/FaZRHOmMfW pic.twitter.com/UbpQCfixwz

Sweeney admitted the RFU have also not been able to get in touch with World Cup winner Thompson: “We have tried to contact him this week. Unfortunately, we had the wrong number for him to begin with.

“We only found that out after 24 hours, but we have tried to contact him. That’s just to have a chat and see how he’s doing, but we haven’t made contact yet.”

Like O'Shea, Sweeney was keen to highlight the RFU's continued work to improve player safety in rugby to minimise the risk of concussions in the game.

“First and foremost in these legalistic times, this is very much a human story and we recognise what’s happening here. We recognise the difficulties the families are going through and then bringing these stories into the public.

“We applaud them for doing that, but also in the context of their motivation which is to improve the game and make it better and safer for future generations.

“It’s not a time to hide, not a time to go missing. It’s really a time to be open and transparent. We’ve got to make sure we’re making the necessary changes, to ensure we’ve got the safest possible game across all the different levels.

“We do take player welfare extremely seriously, I want to reassure you of that. It features in every strategic document we produce.”