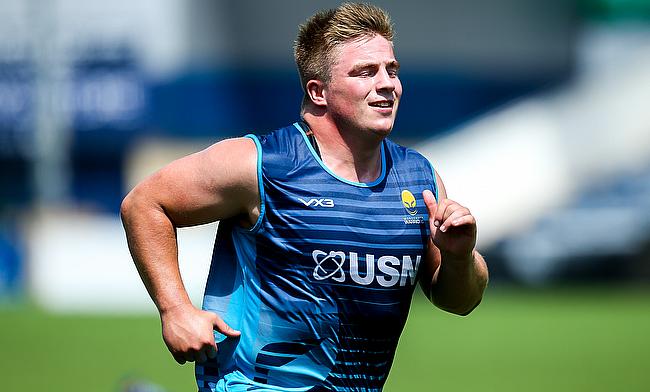 Isaac Miller believes his time at Loughborough University was vital as he sets his sights on making the grade in the Gallagher Premiership.

Last week, the hooker signed a new contract at Worcester Warriors after joining the club in the summer from Championship outfit London Scottish.

Miller also recently made his debut for the Warriors in the European Challenge Cup against French side Pau and now he is hoping to kick on.

But, the former Loughborough captain insists he wouldn’t be at Sixways if it wasn’t for his development at university.

“I sort of went to Loughborough knowing that they were a good rugby team, but I didn’t go there for the rugby!” he said.

“I went there originally to do an undergraduate degree in Sports and Exercise Science, but I played rugby at school so I joined the rugby team at Loughborough.

“I didn’t realise how high the standard was. Obviously, they have a team in National One and a good Uni side, but for my first year, I was playing 3rd XV’s.

“I just kept progressing and in my fourth year, I played quite a lot of rugby and I managed to get picked up to play for the Scotland U20s too.

"I don’t think I would be where I am if I hadn’t been at Loughborough. It is such a good place if you want to try and balance your sport with doing a degree.”

Miller is one of a number of recent players who have taken the next step into the professional game after experiencing a high level of university rugby.

“University rugby is getting bigger and bigger by the sounds of things!” added Miller.

“My last year at Loughborough was the first year of BUCS Super Rugby. They were streaming videos and they were televising a couple of the games and since I have left, it has obviously exploded even more.

“It is a new route for guys to get into a professional environment who might be missed out or haven’t been there before. If you have not been picked up by an academy or not played at age grade level with your country, there is no other way of being seen, really.

“There are loads of guys in the last couple of years who have gone from BUCS Super Rugby to play Prem or Championship. Exeter have had Tom Lawday, Sam Skinner and you have got Alex Dombrant who was at Cardiff Met and he is now with Harlequins in the Premiership. These boys were playing university rugby two or three years ago and now they are starting Premiership and European games.

Fewer than a handful of Premiership games under his belt for Harlequins and 21 years of age, the instinct is to laugh at the possibility of Alex Dombrandt bolting into international contention, writes @SBarnesRugby https://t.co/d3KhaOM2uM

“It shows you the quality of BUCS Super Rugby. It is not a joke. There are some really good players in there and it is definitely a way to get picked up now.”

Miller’s journey into professional rugby has been mostly overseen by Dave Morris. The current London Scottish Director of Rugby was in charge at Loughborough before moving to the Athletic Ground in 2017.

“Dave has been fantastic for me. I wouldn’t be at Worcester now if it wasn’t for his influence,” Miller said.

“London Scottish is a great club. I really enjoyed my time there. It was a really good stepping stone into the Premiership in terms of training and playing full-time and Dave played a massive part in me joining from Loughborough and moving to the Championship.”

Following a superb term in the second tier, Miller joined Worcester and began the summer with the aim of making an impression.

However, the 24-year-old’s debut campaign with the Warriors suffered an immediate setback as he broke his collarbone in their first pre-season fixture against Benetton.

Asked about the injury, Miller said: “It was not ideal! I have been pretty lucky with injuries over the past couple of years. Obviously, you are frustrated, but it is just part of the game.

“I honestly can’t say how good the club were with getting me back fit. The team are class and they were really good with me.”

After a tough beginning to his Worcester career, the last two weeks have certainly been positive for Miller after playing in the Challenge Cup and signing a new contract at the club.

Head coach Rory Duncan also praised Miller’s attitude during his lay-off and now the hooker is keen to impress in the second half of the season.

He added: “I am chuffed to know that I will be here next year and I just want to keep pushing on in a Premiership environment.

“I have just been back fit the last month or so and it was great to be put back in the mixer with the lads and play in those two European games and hopefully I crack on and get a bit more game time with the club.

“Worcester is an exciting place to be at the moment, this year especially. Some of the results we have had have been class and there is just a new vibe from what people who were here before me have said. New coaches, new players and everyone has gelled really well and it is great to be a part of it."