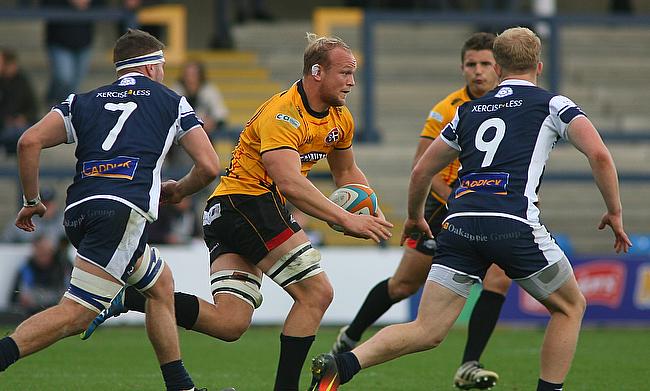 Weather hits Northumbria’s title bid, but Exeter shine through to go top
Simon Hammersley – I would not be playing in the Premiership if I hadn’t gone to university
Josh Beaumont heaps praise on university rugby
Ruaridh McConnochie – How university rugby helped me achieve Olympic success

Exeter Chiefs’ Tom Lawday insists BUCS Super Rugby is a vital platform for players who want to advance into the professional game.

The forward is currently dual-registered with Championship side Cornish Pirates after a successful period with the University of Exeter.

The 24 year-old, who was the top try scorer in the inaugural BUCS Super Rugby campaign, signed a senior academy contract with the Chiefs at the end of last season and he hopes more players can follow suit.

“I think the pathway is so crucial,” he said. “To have such a competitive and talented league within the university system, it is just going to encourage more and more people to attend university.

“I think that it is really important not just for rugby, but for education, the lifestyle and social reasons too. I am hoping that a lot more people are going to use BUCS Super Rugby as a reason to continue in education.

“It allows players who maybe developing a little bit later, to have the chance and give them a shot of taking that next step in the game.”

Lawday also reached back to back Twickenham finals with Exeter, winning his first in 2016, and he believes that playing at the home of English rugby only enhances the competition.

“Playing for the university was awesome,” Lawday added. “BUCS formed the Super League in my final year which ramped up the competition and it really made you feel like a professional outfit.

“That helped training become much better because match day was so much more intense and you were fighting much more to beat some really good teams.

“Travelling up to Twickenham and going through your usual match day routines was unbelievable.  Obviously, there was not 80,000 people there, but you are still running out in front of your friends and family so it was huge.

“It was such a great opportunity and to get that once was pretty special, but to get that two years in a row is something that will stay with me forever.”

Signing a professional contract at Sandy Park was the next step for Lawday, but he admits the transition was a smooth one due to the link the university has with the Premiership champions.

Now enjoying his spell down in Cornwall with the Pirates, Lawday hopes more chances with his parent club are not too far away after appearances against Harlequins and Cardiff Blues in the Anglo-Welsh Cup last year.

He added: “Having the strong link with the Chiefs obviously massively drives competition within the university.

“For myself and another few guys in my year, to form that link pretty early on in our university careers was really good. The Chiefs supported us throughout university and it drove our rugby on enormously.

“For us to go down and play with the guys at Chiefs has made us better players. I think it also allowed us to bring back what we had learnt at a professional club to our university game so the learning was amazing.

“It has been brilliant down here so far in Penzance. It has been a great environment to come into and I have continued to learn a lot down here.

“I have fitted in quite well and I am also getting good game time which is fantastic. I am just biding my time, learning lots and putting in the graft so hopefully I can get an opportunity back up the road.”