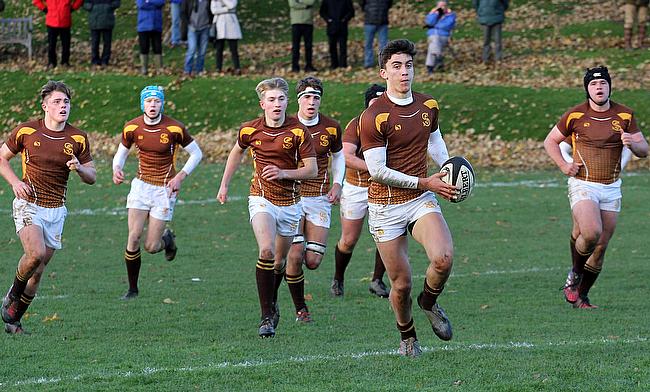 “She is a student of the game who knows it inside out”: The refereeing rise of Hollie Davidson
Opinion: Vanishing van der Merwe a blow for Edinburgh, but Watson was a key man they just couldn’t afford to lose
Series Three: Looseheadz x Talking Rugby Union Podcast - Jamie Bhatti
'When you’re not playing it pulls at your heartstrings' - Taylor keen to make up for lost time

Given it looks like he has been snatched from under England’s nose, you might think not too many people south of the border would have been too excited to see Bath’s up-and-coming centre Cameron Redpath named in the initial Scotland squad for the Six Nations.

However, those at Sedbergh School in Cumbria are very pleased for him.

Redpath, the son of former Scotland skipper and well-respected professional club coach Bryan, headed to Sedbergh in his Lower Sixth after time at King’s School in Macclesfield.

“As soon as Cameron joined you could see he was a brilliant athlete,” Sedbergh Director of Sport Stuart Oliver told TRU.

“His skill level, speed and control of the game was immense. He was, and of course, still is an incredibly humble and delightful young man, He worked so hard in the gym and was very disciplined with his lifestyle.  Cameron was such a competitor. He thrived on being set a challenge - any challenge!

Massive congratulations to OS Cameron Redpath (S) who is named in Townsend’s 35 man squad for the six nations. @camredpath https://t.co/1aht2Pzk2h

“At that time, I was Cameron’s Housemaster, and I was also the Forwards Coach of the First XV and Simon Mulholland, the Head Coach, always played Cam at centre and he was one of the best captains of rugby Sedbergh have ever had - and we have had some incredible talents over the years.

"He was articulate, strategic and led from the front. He was outstanding every time he put on a brown jersey. Sedbergh went on a 46 game winning streak, and much of our success was down to Cameron and his peers for setting a phenomenally enjoyable yet disciplined culture.

“Cameron left a big impression on everyone he came across and broke the hearts of many backlines that he ripped apart.”

Born in France while his father was at Narbonne in late 1999, Redpath grew up in England, but by 2015 he was playing for Scotland under-16.

The following year he represented the Scots against England, however, his under-18's rugby saw him pull on the white jersey.

That led to him scoring a try on his England under-20 debut in early 2018, and although he was doing well and starting to breakthrough at Sale Sharks, it was still a massive surprise when England Head Coach Eddie Jones selected him to go on England’s summer tour to South Africa.

When the call came, he was still at school and Sedbergh’s Oliver continues:  “Cameron was selected to tour South Africa with England and he heard about it first from social media.

"He missed period one that day because the announcement was at 9am. By 9.25am he was back in class revising for his A-Levels!

"We had arranged for him to sit his A-Level exams in a school in South Africa mid-tour, but alas this never happened in the end due to his knee injury.

“He was remarkably positive and exceptionally philosophical about missing the tour.  He and his father were very complimentary about how England looked after his operation and Cameron bounced back fantastically well.

“Sale play young players and this was a great club for Cameron to start at. That said since he moved to Bath earlier this year, it has really transformed his game, and Cameron is so complimentary about the club, both the culture and the people are brilliant and he is extremely happy there.

“Sedbergh are very proud of Cameron and everything he has achieved thus far.  We fully support his move to Scottish colours and we wish him all the very best. I strongly suspect he will be around for the next decade and Cameron Redpath, who is very driven, can become a household name in years to come.”

“We are obviously delighted that he has chosen Scotland.”

Redpath was one of four uncapped players named in the Scotland squad in midweek who will start preparing for the England match on February 6 along with Sale Sharks’ hooker Ewan Ashman, fellow front-row David Cherry of Edinburgh and Gloucester second-row/back-row Alex Craig.

After that 2018 injury, he played for England under-20 again in 2019, but seemingly, he has now decided his long-term path.

“We are obviously delighted to be able to announce Cam in the squad,” Townsend said.

"We're delighted we can now involve him in a squad." pic.twitter.com/ADcb1pPmk9

"I have been chatting to him for a wee while now, we offered him the chance to be in our squad in the Autumn, but he felt it wasn't the right time. Now he has come to a decision and he has chosen Scotland.

“He came to the decision on his own. His dad obviously played for Scotland and captained Scotland, so I imagine the family will be really proud, but it was Cam's decision.

“I've chatted to him about his game on and off over the last few years. He is an excellent player. He has played regularly for Bath this season and he has a lot more to bring, a lot more growth in this game over the next few years. I'm looking forward to working with him.”

As well as the squad named, exciting youngsters Rufus McLean (Glasgow, back three), Jamie Dobie (Glasgow, scrum-half) and Rory Darge (Edinburgh, back-row) have been invited to train with Scotland for experience.