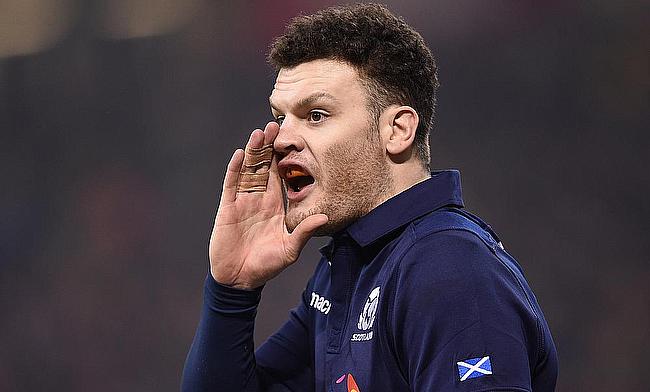 Australia and South Africa to face Scotland in 2021 November series
Scottish Premiership player covers 77kms in a day to raise awareness for mental health
“It’s up to Matt to show what he can do”: Fagerson’s battle with Alldritt will be key on Sunday
Family guy Weir praises “awesome” people around him ahead of Autumn Nations Cup

Duncan Taylor was 23 when he made his Scotland debut in 2013, but due to several untimely injuries, he has missed a large number of games.

However, the 31-year-old now looks likely to win his 28th cap for his country this weekend when they take on Ireland in the Autumn Nations Cup.

Post the first lockdown, the centre was flying with Saracens and performing well in the delayed 2019/20 Champions Cup before another lay-off came and it seemed doubtful that he would feature for the Scots again in this calendar year.

However, he is a determined character and he bounced back to earn some time off the bench against France in the Autumn Nations Cup fixture on November 22. That was his first taste of rugby in a Scotland jersey since their World Cup pool stage clash with Russia in October 2019.

He now looks set to have a role to play in Scotland’s third/fourth place play-off against Ireland in Dublin on Saturday - and Taylor believes the setbacks he has had in his career to date have helped him savour every moment, on and off the field.

“I think as you get a bit older you start to really embrace things a little bit more than maybe you do when you’re younger,” he told TRU.

?? Read our match preview ahead of Saturday's #AutumnNationsCup match against Ireland in Dublin, live on @primevideosport ??

“You have more gratitude for the opportunities you get to be around your teammates and to play for your club and your country.

“I’ve really developed that love for the game over the last few years without playing as much as I would have liked to. You realise how much you miss it when you are not involved.

“When you’re not playing, it definitely pulls at your heartstrings and makes you realise how important this game is to you. I’m 31-years-old now and time won’t last forever for me and my rugby career so I’m just embracing every opportunity I get, whether it’s training or playing I try to enjoy it as much as I can.

“It has been a bit of a whirlwind this past year. There has been stuff happening around Saracens, I have missed internationals and I don’t think you could have predicted this [the ongoing pandemic].

“It has been a year full of madness, but it has been quite enjoyable. I think myself and any team I have been a part of have made the most of the situations we have been in so far.

When Scotland last visited Dublin - in the Six Nations back in February - they missed a number of opportunities and slipped to a 19-12 loss.

The result did little to stop pundits talking about Gregor Townsend’s men being ‘soft’ away from home, but victories in Italy (2) and Wales since then have shown what they are capable of on the road.

Taylor and co want to end the calendar year on a high in Dublin and ahead of a tough test against Andy Farrell’s men, he added: “They are a great side, a side we have struggled to beat in the last few years and I’d expect more of what they are great at.

“They will bring a strong attacking game, they will bring a few surprises I’d imagine off first phase, they have a great defensive unit and they have guys who are good over the ball and make the breakdown a bit of a nightmare.

“I think we are going to see a real battle at the breakdown and they have some great individuals who can cause problems so we will have to be on the money at the weekend.

“Our squad have been together for a while. We’ve probably got more players to pick from now than we’ve had in a long time.

“Edinburgh and Glasgow have also done really well over the past couple of years, so that brings an element of belief into the camp. Whenever we haven’t had too much depth in the past, it has been a challenge for us, but we’ve got a lot of depth and competition now.

"There’s no guarantee of anyone getting a jersey now, which is great for the squad and the performance side of things and we want to end the year with a victory.”