Heather Kerr and Clara Nielson: From two Twickenham meetings to facing the best teams in the world 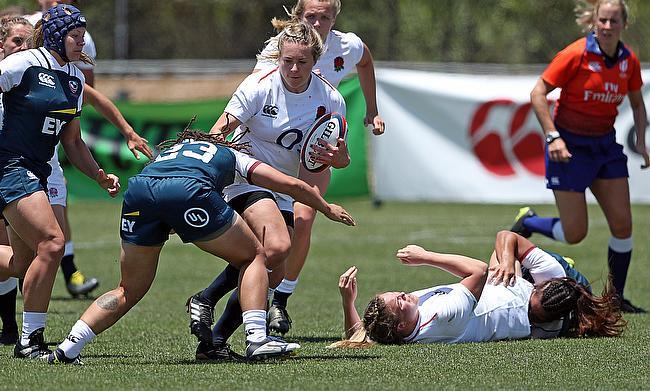 As is common in most international sporting teams, players will come together and leave their club loyalties at the door when it is time to represent their country.

But for England’s Heather Kerr and Clara Nielson, their duties during the domestic season just have to be mentioned.

“We don’t talk about it..!,” laughed Kerr, when asked whether this year’s BUCS Championship Final between Durham University and the University of Exeter is ever discussed between the pair.

“Well, it’s not quite off limits but I haven’t spoken about the result too much!” said Nielson who was part of the Exeter side that clinched a 30-26 victory over Kerr’s Durham back in April.

“To be honest, the final was great to be a part of and it was just a wonderful advert for women’s rugby and university rugby in general,” added Kerr.

After Nielson and Kerr went head to head at Twickenham three months ago, they were doing battle once again at HQ when England faced the Barbarians at the start of June.

The bragging rights went to Nielson again at Twickenham as England began their summer with an excellent win and now the duo are in America representing the Red Roses in the Super Series.

England have made a solid start in San Diego thanks to victories over the USA and Canada, with Kerr playing a starring role in the opening fixture against the hosts. The Darlington Mowden Park Sharks hooker scored twice as Simon Middleton’s side kicked off the tournament with a 38-5 win, whilst Nielson came off the bench to win her first Test cap.

Having experienced parallels - in terms of university rugby - during the course of this season, it is fitting both players find themselves involved in this new and exciting era for England and considering neither are currently part of the EPS Squad, their development is testament to the growing university game as well as the Tyrrells Premier 15s.

“It is really good to see players who have experienced university rugby also play for their clubs and England,” said Nielson, who scored in this year’s BUCS Final for Exeter. “The thing with university rugby is, you can begin the sport when you first start at Uni and it something you can then continue. The support you also get at university is really positive too.

“For me, I started by playing in goal for the hockey team!” Kerr added. “I then decided to turn to rugby and honestly, I had never picked up a rugby ball until university so it is crazy to think what you can achieve in this sport.

“That can happen with anyone at university. Claudia MacDonald is another example. She was in the netball second-team at Durham, but then decided to use her skills and transferred them into rugby. We now just go around encouraging other players to get involved in rugby if it isn’t working out in the sport they have original chosen!”

It is not just MacDonald who has immersed herself in the university rugby environment. Current Red Roses Kelly Smith and Zoe Aldcroft have been involved in the developing programme between Hartpury University and Gloucester while captain Sarah Hunter, Emily Scarratt and Carys Williams are all part of a Loughborough Lightening outfit which has strong connections with the university.

In truth, the list of England players who have experienced the university game is more extensive than this, but for Nielson and Kerr, they cannot speak highly enough about their development at Exeter and Durham respectively.

“Exeter has been a wonderful place to be,” said Nielson, who plies her trade for Bristol Bears in the Tyrrells Premier 15s. “Jo Yapp [Exeter Head Coach] has brought the team on so much and we owe her a lot for our recent success. It has been great to have learnt off her.”

“My last game for Durham was at Twickenham this year, but I am still going to be around the university,” says Kerr. “We have had a great year despite not winning the trophy, but the programme is really in a strong place. Girls can focus on being at university and be a professional rugby player at the same time. It is one of those environments when you can push yourself to the absolute limit.”

The next destination on the pathway for Kerr and Nielson is a fixture with France in the Super Series before ending the tournament with a highly anticipated meeting against world champions New Zealand.

England have lost only one of their last 18 Test matches and after brushing aside Les Bleus on their way to a Six Nations Grand Slam earlier this year, the Red Roses have their eyes set on collecting their third win in the US.

?????????????? @EnglandRugby renew their rivalry with ???? @FranceRugby tomorrow night as the #SuperSeries2019 continues in San Diego. Live coverage across @SkySports.

Did you miss their victory over Canada? Catch up on highlights ?? https://t.co/ZkqzMQ0rNp pic.twitter.com/AANVTuzVlr

Before the competition, head coach Simon Middleton emphasised the importance of development rather than immediate results and it was a sentiment echoed by both Kerr and Nielson ahead of England’s clash with France later tonight.

“We are definitely pleased with how things have gone for us so far,” Nielson said. “The physicality is definitely a difference and also you, don’t play against these players week in week out so it is a really good test for us.”

“It is a tournament which is like World Cup standard,” added Kerr, who is set to start at the Chula Vista Elite Training Center this evening.

“A lot of the teams around the world are getting to a stage where there is not much between them and playing this kind of Test match rugby is good for the development of every team in this series, not just England.

“It is never easy to prepare for playing against teams like France, Canada and New Zealand. I think having such a successful Six Nations has helped bring in a lot of players in an environment where we can play really well. It just allows the players who may not have been involved all year, the chance to develop.

“Obviously, as much as we want to win, the results don’t matter as much as our performances does on the pitch. We have to stick to our processes and play the way we want to play. Even if we have a very good win on the scoreline, we might not necessarily have played to the game plan or how we exactly wanted to play. It is more about how we play rather than the result of the games.