Exeter do the double with win at BUCS Championship 7s 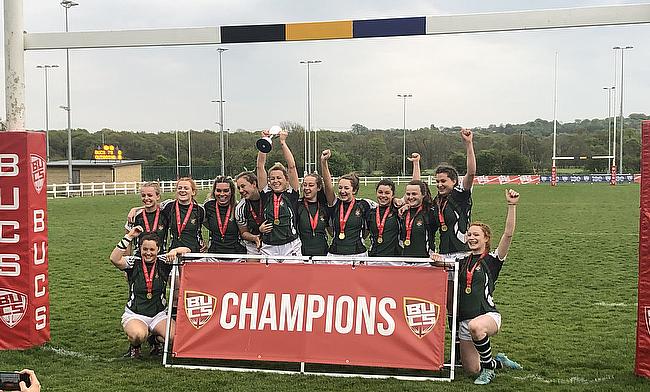 Four weeks after winning silverware at Twickenham, there was more delight for Exeter
©TRU

Last month, they secured the BUCS Championship title and the University of Exeter’s trophy haul continued in the Sevens format of the game as Jo Yapp’s side beat Durham University 22-5 to complete a double-winning season.

The impressive Zoe Heeley was the player of the tournament and the winger was also the star of the show in the final as she ran in a hat-trick to set Exeter on their way. Durham were much improved in the second half at West Park Leeds RUFC and managed to get on the scoreboard, but a fourth try late on sealed the BUCS Championship 7s crown for a relentless Exeter.

This was a repeat of the BUCS Championship XV-a-side final which took place at Twickenham in April and once again, it was Exeter who claimed the silverware as they concluded their season undefeated.

Exeter lost in the semi-finals of this tournament last year against the University of Edinburgh and the Green and Whites faced the Scottish outfit in the pool stages of the 2019 competition. They could not have asked for a better start either, as Exeter gained their revenge over Edinburgh with a 24-7 win before topping Pool A after beating Newcastle.

Edinburgh, who lost to Hartpury in the 2018 final, were still able to advance into the last eight alongside Exeter after defeating Newcastle 27-19 in the opening match of the group.

Pool B contained four teams including eventual finalists Durham. Cameron Henderson’s side showed their quality to pick up three consecutive victories, but they had to fend off a strong challenge from Loughborough University to finish at the summit.

Loughborough also had two England internationals amongst their squad and victories over the University of Bristol and Cardiff Met University sent them into the quarter-finals.

Hartpury University entered this tournament as the current holders of the BUCS 7s Championship as Susie Appleby’s side were able to bounce back from last year’s Twickenham disappointment. The Gloucestershire outfit featured in Pool C alongside a very strong Northumbria University side and their showdown proved to be pivotal.

Northumbria beat Hartpury 27-26 to finish top of their group whilst Hartpury had to settle for second spot after victories over Cardiff University and Swansea University. It meant the reigning champions faced a tricky quarter-final tie with Pool B runners-up Loughborough.

Cardiff Met and Swansea also made up the last eight draw after picking up wins against Bristol and Cardiff in their respective groups.

How Exeter and Durham reached the final

In the quarter-finals, Exeter made light work of Cardiff Met as a side containing a few of their Twickenham heroes clinched a 34-12 win and they set-up a very intriguing semi-final contest with Loughborough, who knocked out holders Hartpury following a 34-21 triumph.

Northumbria had won all three of their pool matches and their excellent run continued in the last eight as they comfortably beat Swansea 26-7. Their opponents in the next round would be Durham as Lydia Crossman and co hammered last season’s runners-up, Edinburgh, 40-5.

“I literally never played before or even watched a rugby game! Jo’s helped so much to get me from the position I was in then, to be able to play here & at Twickenham.”@zoeheeley_ was full of praise for head coach @Joyapp9 after a double winning season for @EUWRFC ?????? #BUCS7s pic.twitter.com/H7L9UVdXwe

Exeter had once again reached the last four of the Championship 7s competition and they were not to be denied on this occasion as the outstanding Heeley, along with skipper Hannah Gascoigne, led the Devonshire side to a 33-12 win.

Four weeks on from their meeting at Twickenham, Durham set-up another clash with Exeter but they had to work hard against Northumbria to come away with a 38-14 victory in the semi-finals.

In the end, it was Exeter who tasted success in the final as their dominance in the Women’s game continues at this level.